Ford’s latest and greatest vehicle, the all-electric Mustang Mach-E is scheduled to begin deliveries in the next few months. With it inching ever so closer, fans of the automaker and their newly found EV path are growing with excitement. Eagerly waiting for deliveries to begin, those who’ve taken the step further with a preorder have already begun receiving calls from their local dealerships.

As an electric crossover, the Mach-E looks to go head to head against the ring leader known as the Tesla Model Y. With everything we know, which is still unconfirmed until we see these cars hit the road, it’s looking like Ford has built a car worthy of going up against Tesla.

Ford has taken a lot of notes from Tesla in regards to both technology and process, but one thing that can’t seem to kick is their poor dealership model. Almost instantaneously, we saw Ford’s network of dealerships hurt the Mustang Mach-E’s brand by throwing upwards of $15,000 premiums.

There’s no question that consumers prefer a direct sales route, as seen used by Tesla. But for the time being, Ford is stuck with their loathed retail sales method.

At over 3,000 U.S. locations and ~2.3 million annual sales, Ford certainly has some advantages stepping into the EV game. Some could argue that simply offering the electric vehicle at their already established locations will put them neck and neck with Tesla’s sales.

However, there’s one step in the process still far from perfected, dealership training. With franchises individually owned and the only incentive being sales, manufacturers like Ford have never been great at educating their sales floor. EV’s are still a relatively new thing and customers remain skeptical with questions ranging from battery technology to “is it better than a Tesla?” Being EV educated will not only make or break the sale, it’ll make or break an EV purchase.

Last year we put our local Ford dealers to the test asking questions a typical consumer would call-in with. As expected, we were stuffed with EV misinformation and even told you couldn’t charge a Mach-E at home. Clearly, at the time, dealerships were no where near ready.

Since then Ford has taken massive strides in releasing both EV and Mach-E specific training programs. Below you’ll find the newly released dealership training program for the Mustang Mach-E along with a ten question quiz required to sell these vehicles. 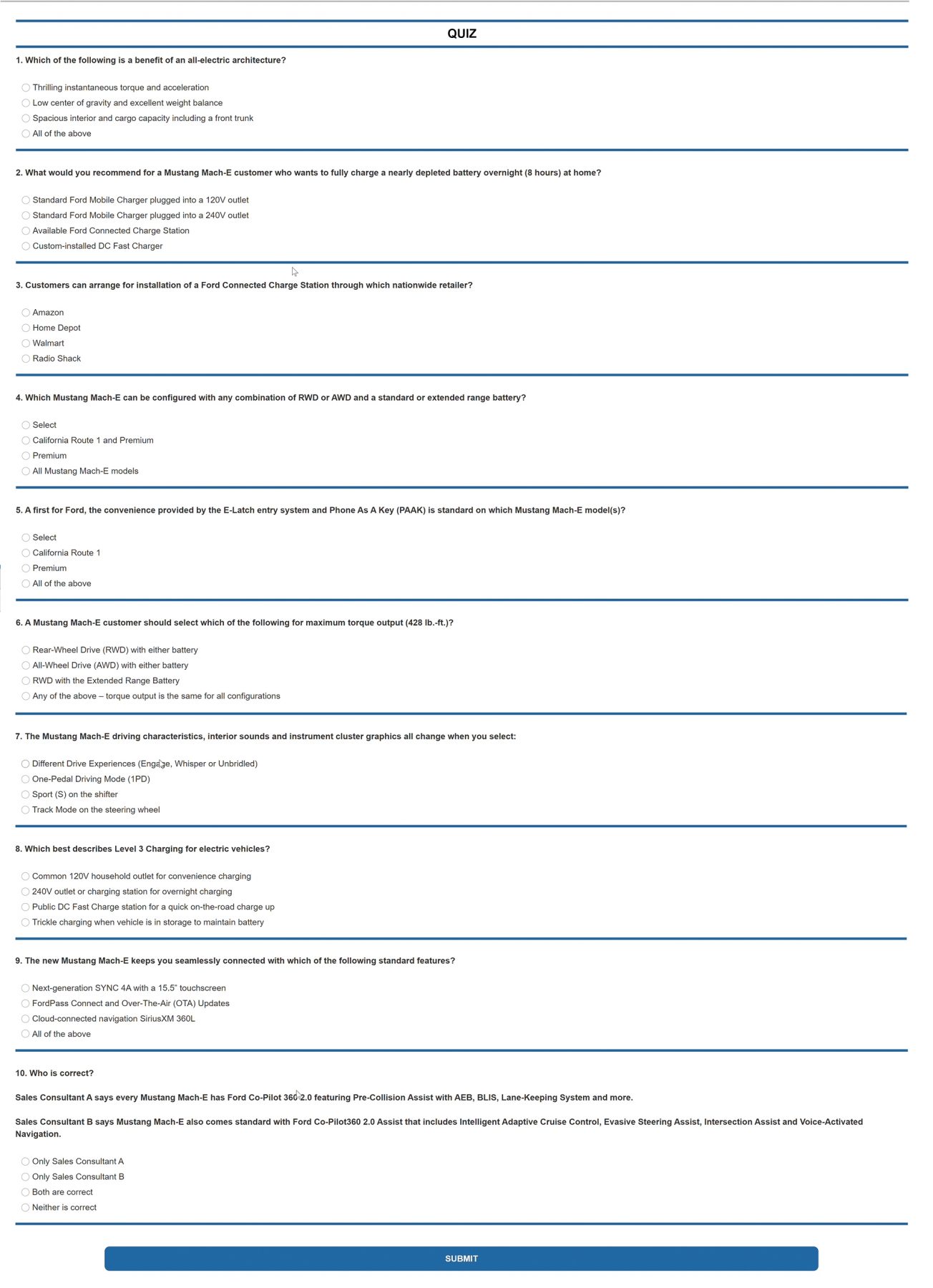 Training is standard and done for every new vehicle. Typically, they are conducted in-dealer with a tangible vehicle, but due to current norms, Ford had to take a different approach. Instead, the training was done over web conference where an experienced Ford employee walked through the above PDF slide by slide.

Without proper EV education, converting car buyers to electrified vehicles is near impossible. So the question stands, is the above knowledge enough to answer the average car buyers concerns with EV’s?