The Ford Mustang Mach-E is due out at the end of this year and will be the newest contender to help quell the absolute dominance that Tesla has had in the electric car market thus far. A few electric cars from legacy automakers have already made their debuts, but could not usurp the throne. Will the electric Mustang Mach-E be any different?

The Mustang Mach-E will be Ford’s first modern purpose-built electric car (we know the Ford Focus Electric existed, but we don’t count compliance cars). Much to the ire of die-hard Ford and muscle car fans, the Mustang Mach-E takes its name from the legendary Mustang Mach 1, but instead of an imposing muscle car, it’s an electric crossover. Regardless, Ford is using its most iconic name for its new electric crossover shows how much they believe in it and its ability to kickstart a new chapter for Ford. 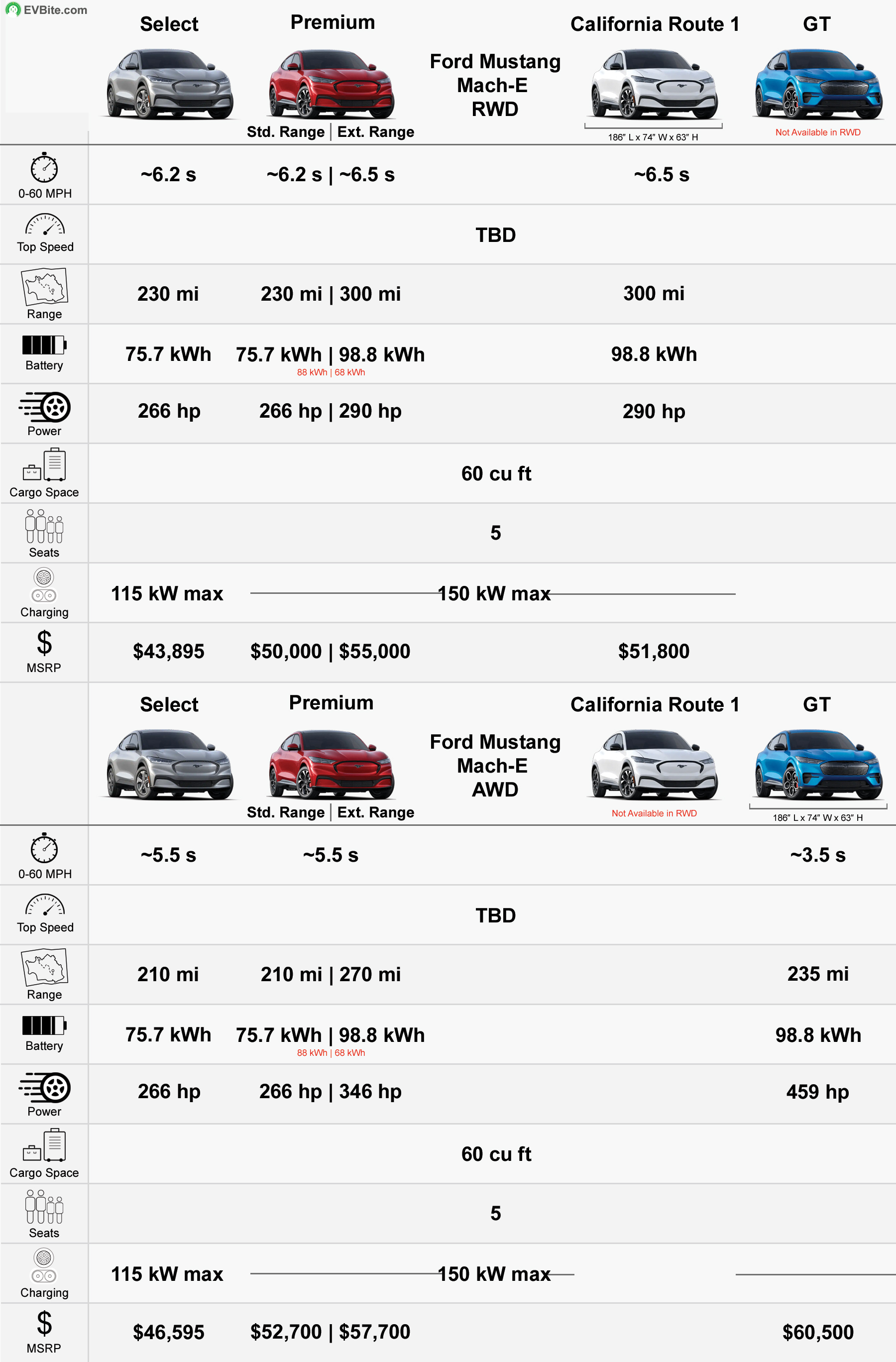 The above specifications are still not 100% set in stone as many of them are “targeted” but we do expect the final specs to fall in line to the targets provided.

If we can assume that Ford will be successful in achieving the above specifications for their production versions, then the Mach-E will end up coming short in a lot of comparisons to its biggest competitor, the Tesla Model Y, but it won’t fall too far off its tail.

Comparing the Ford Mustang Mach-E Premium 4X with the Tesla Model Y Long Range (as they are closest in both price and specs), the Model Y does beat out the Mach-E in many categories, but it’s not a landslide. 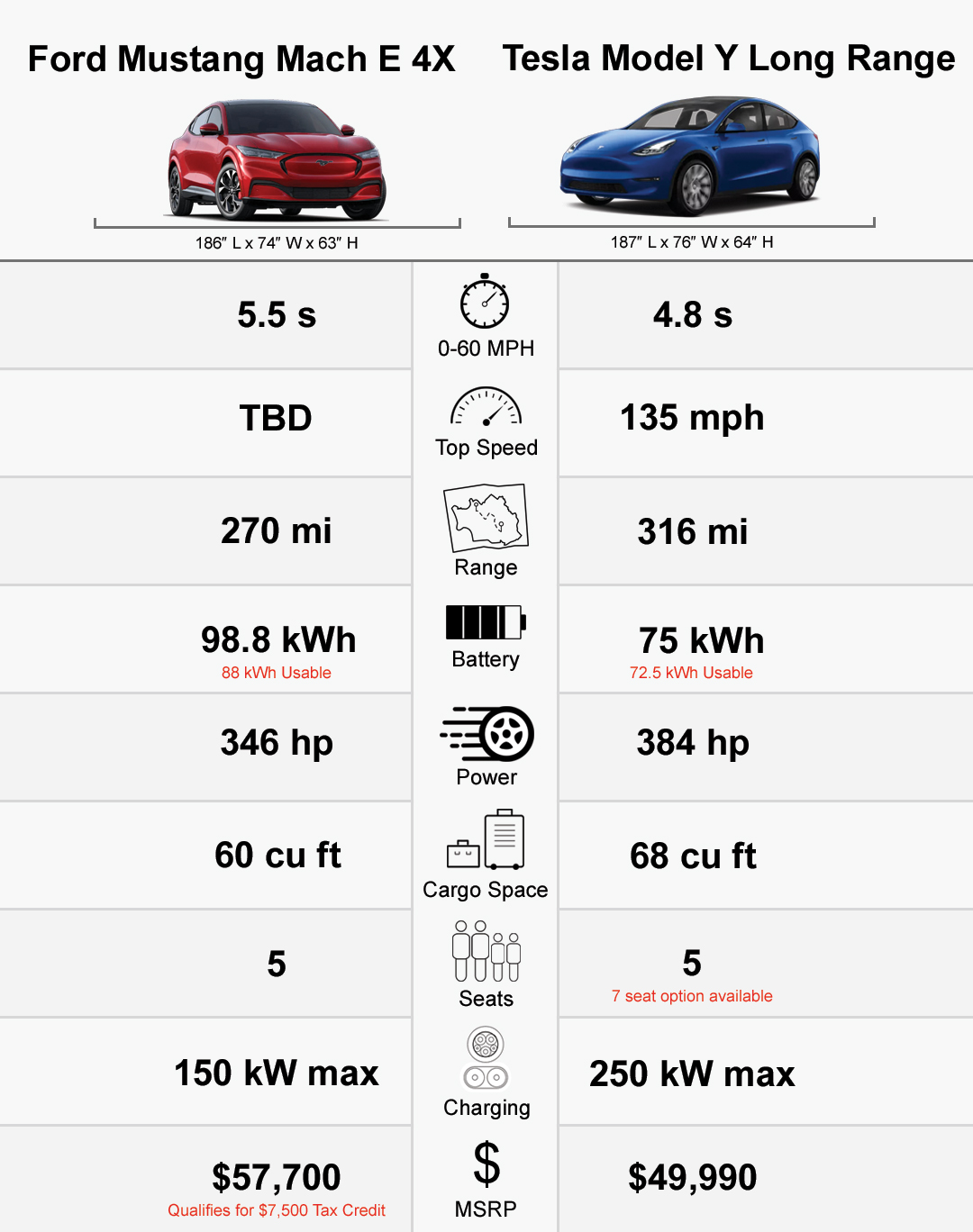 The most important statistic for many people, the range, is in favor of the Model Y. While the Model Y has a range of 316 miles, the Mach-E tops out at 270 miles for the AWD and 300 miles for the RWD version. Most people no doubt want to have as much range as possible however, once you get past 250 miles of range, it should be acceptable for almost anyone’s typical driving pattern.

The Model Y wins out on 0-60 time as well, with it having a 4.8 second time while Ford is targeting a “mid 6 sec.” time for the RWD and “mid 5 sec.” time for the AWD. Again, you’re not going to lay down sick drag race times in either, but the Model Y is that much quicker.

So why would once choose the Mach-E over the Model Y? Well for one, while the prices are in the ballpark of one another. Ford still qualifies for the full $7,500 EV tax credit, while Tesla no longer does. This can end up resulting in the Mach-E’s affordability outweighing whatever small shortcomings its performance has when compared to the Model Y.

Design of course plays an important part in the car buying experience. I am sure that most people would avoid driving a car that they don’t like the look of if they could help it. That’s of course completely subjective, but there will be those who prefer the design of the Mustang to the Model Y, and vice versa.

Earlier this year, Autolist took the Ford Mustang Mach-E vs Tesla Model Y comparisons to the real world. They conducted a publicly held survey to see which direction consumers leaned. The results were a bit interesting.

Those surveyed were just about evenly split between the two vehicles. With 51% preferring the Ford, the Mustang Mach-E seems to have won the hearts of many. The reasoning for preferring the Ford came down to having more trust in the brand, its vast network of dealerships, and its expected reliability. Those in favor of the Mach-E also simply liked the design choices better and were uncertain of Tesla’s future.

Ford has been making strides to take electrification seriously and they are not above implementing certain aspects of Tesla’s proven business strategy to make themselves as competitive as possible.

Ford is still unable/unwilling to move on to a direct to consumer sales method, as found with Tesla. People will still have to go through the hassle of dealing with a traditional dealership. However, efforts to make the process a bit simpler will begin with the introduction of the Mach-E. The Mustang Mach-E will utilize an e-invoice system that will prevent dealers from advertising the new electric car under the MSRP.

Unfortunately, they will not been able to step in once the dealership makes contact with customers and so, dealerships are still free to set whatever prices they want for the Mach-E, which might kill a lot of momentum for the new electric crossover. Still, Ford is taking the first steps to possibly set up a more direct to consumer method of sale.

Ford stated that the change was made for the following reasons:

Second is an established charging network. One of the biggest reasons for Tesla’s success is its readily available and well-spaced out Supercharger Network that allowed for chargers to be available within most of the US population. While Ford has not built up a charging network of its own, it will introduce the FordPass Charging Network. The network will utilize other charging networks such as Electrify America and place them under one umbrella that will culminate to over 12,000 charging stations with more than 35,000 plugs. Ford will also make the first two years of this service free for owners of the Mustang Mach-E.

The company is also planning to collaborate with Amazon for easy installation of the Ford home chargers so that customers’ transition towards electric cars can be as easy as possible. Like other EV’s, every Mustang Mach-E will come standard with a mobile connector and offer a home wall charger for sale alongside.

While Ford has not built up their own charging network, a few months ago a trademark filing from Ford for ‘Fastor Charge‘ was found. No other info is known about it besides its intended use being for “apparatus and instruments for conducting, switching, transforming, accumulating, regulating or controlling electricity, namely, charging stations for electric vehicles; batteries for vehicles; accumulators and chargers for vehicle batteries”. It wouldn’t be too far fetched to think that Ford will start building out a small network starting from their dealerships outwards. After all, all EV certified Ford dealerships are already required to maintain two charge points.

There are many reasons to think that the Ford Mustang Mach-E might become one of the first serious contenders from a legacy automaker to go against Tesla. The impact of cars such as the Jaguar I-Pace and Audi e-tron, while being a good start for these companies, have been minimal, mostly in part to their limited releases. Most automakers will not hit their planned stride for electrification for another few years, but the Mach-E looks to be a mass-market electric car that’s ready right now.

It however can all come crashing down. We are still just basing predictions off of plans. Production holdups could happen, the electric drivetrain might have issues, the dealers might mark them up significantly, and Ford could end up making big changes to its electric plans. We simply don’t know how good the car will be until production starts.

But for the time being, it looks to be pretty solid.

Forgot to mention Teslas huge National and International Supercharger Network vs. Ford’s….. WHat?… Nothing. That’s what swings this whole thing TOTALLY in Tesla’s favor.

Nice comparison. They look really close. What about the torque numbers, how do they compare?

The Tesla Model Y has 376 lb-ft for the Long Range and 497 lb-ft of torque for the Performance.

Take my money…please. I want a Mach e