Welcome to our weekly Tesla news recap, where we discuss and share the latest Tesla news. If you don’t have the time to constantly monitor Tesla and their ever-changing company and products, this is for you. This week, Tesla announced major changes to the Model S and X pricing and naming scheme, rumors are spreading of a new battery cell, and the Q4 earnings call gave us insight into Tesla’s future.

With the announcement of the 75D battery pack coming to an end, we expected some lineup changes. Elon also recently stated they would drop the battery pack size from the naming scheme of the S & X and swap over to a similar system as the Model 3. This week both were taken into effect along with some pricing changes.

Tesla will only be producing a 100 kwh battery pack but will software limit the battery’s range to achieve a lower base price point for the consumer. 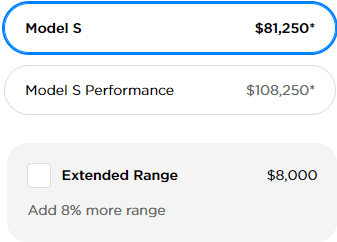 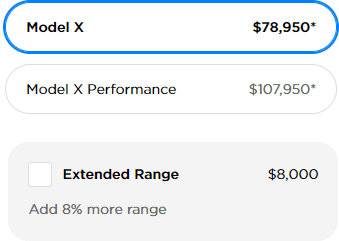 The software limited Model S will now start at $85,000 before incentives and will feature a range of 310 miles, top speed of 155 mph, and 0-60 time of 4.1 seconds. There’s now an $8,000 option to extend the range to 350 miles. The performance version will start at $112,000 before incentives and ludicrous mode is no longer included. Instead, the ludicrous option comes with the ludicrous price tag of $20,000. All other pricing remains the same.

Very similar to the Model S, the software limited Model X will now start at $88,000 before incentives,range of 270 miles, top speed of 155 mph, and 0-60 time of 4.7 seconds. There’s now an $8,000 option to extend the range to 295 miles. The performance version will start at $117,000 before incentives and ludicrous mode is no longer included. Instead, the ludicrous option comes with the ludicrous price tag of $20,000. All other pricing remains the same.

Tesla has dropped battery pack naming schemes all together. Instead of a 75D, 100D, and P100D, we will now just have a Model S/X and a Model S/X Performance. Tesla is no longer producing the 75 kwh battery pack.

For those that don’t have the time to listen to the hour long call, here’s the very quick roundup on Tesla’s future:

These all sound very optimistic and Tesla definitely isn’t known for meeting deadlines but it’s a start.

Tesla opened up Model 3 orders in China just last month. Now we are finally starting to see them be delivered. The Performance model will be the first to arrive and with a higher price tag of ~$83,000 (RMB 560,000) due to tariffs and such. A less expensive Long Ranged rear wheel drive version is expected to arrive in March starting at approximately $64,400 USD (RMB 433,000). This is a significant price increase compared with the U.S version. We will just have to wait and see if Gigafactory 3 will eventually lower costs.

While some took this as a possible upcoming refresh or false statement regarding the cell swap, others considered the possibility of a new and improved cell for the Model S & X. Now a newly filed Tesla patent brings that possibility a bit closer. The new cell will focus on faster charging and discharging, better longevity, and a lower cost. You can read more about the cell and see the patent over at Electrek.

Model Y arrival is way too late and it will fail because of the loss of its govt tax credits and a dozen superior SUVs waiting for it – already the Hyundai Kona EV and Kia Niro have long waiting lists at the bottom price range and Jaguar I Pace has clobbered Model X sales and also has a lengthy waiting list and a $7500 tax credit to undercut the Model Y on the updside. The Model Y is looking like it will be DOA.
Musk is liable for shareholder lawsuit after his silly “insane demand” claim for Model 3 and by implication, Model Y. If Tesla can’t sell 3300 Model 3 cars on lots using incentives, price discounts, etc,and has to go to Europe before he planned to insearch of customers, and has shut down production, he should not have made any silly claims about “insane demand.”