As is common knowledge among EV enthusiasts, Tesla typically performs well on crash test evaluations. The original Model S had perfect marks during the National Highway Traffic Safety Administration crash test and reportedly broke one of their machines as well. While the Model 3 did not break any machines during its European crash testing, it did not disappoint in its safety rating.

The Tesla Model 3 was recently assessed by the Euro NCAP and performed very favorably. 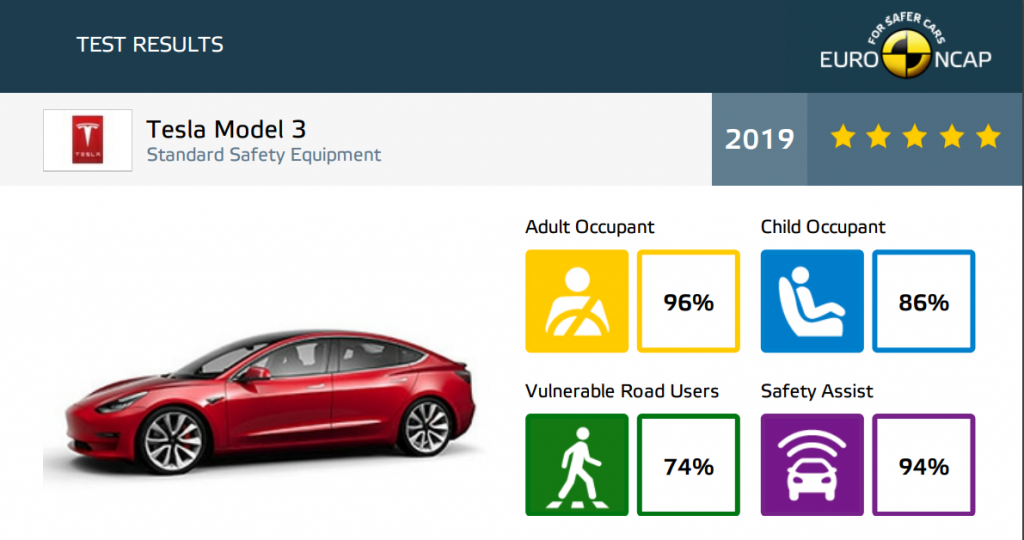 When averaging out the percentages (which may or may not be how the website sorts the start ratings), the Model 3 is the highest scoring car of 2019. Only the Mercedes A-Class tested in 2018 has had a higher average score (88.5% vs. 87.5%). It is important to note that the Euro NCAP had some restructuring and stricter tests. As such they have stated that scores are not really comparable pre- and post-2018. 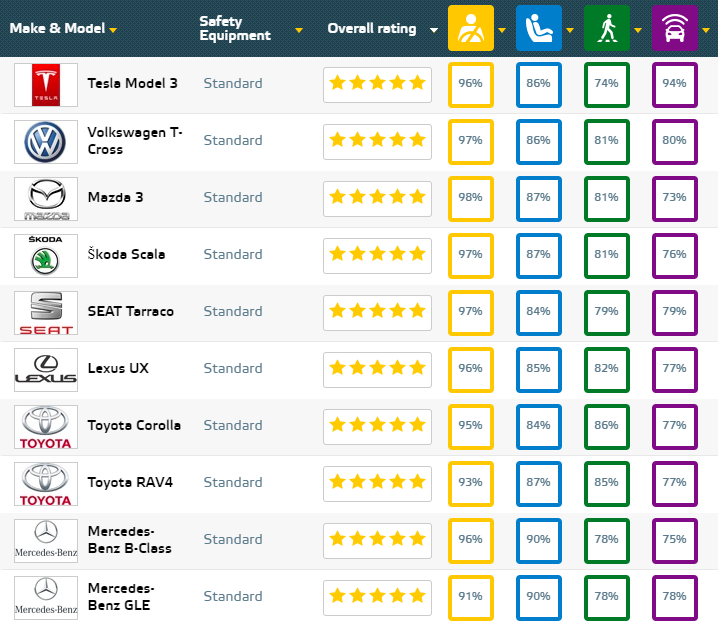 You will notice that the Model 3’s overall score is helped greatly by its Safety Assist grade which is 14% higher than the second place holder and is the highest score the Euro NCAP has recorded since the tests changed in 2018.

Matthew Avery, Director of Research at Thatcham Research, had made a comment regarding the Model 3’s safety systems:

“The Tesla Model 3 achieved one of the highest Safety Assist scores we have seen to date. Its Collision Avoidance Assist system is first class, with its Autonomous Emergency Braking and Forward Collision Warning systems showing high levels of performance.”

Tesla’s Autopilot, however, was not assessed by the agency. They plan to start testing autonomous driving features in 2020, so the Tesla family will most likely be revisited at that time.

Avery had also praised the Model 3 for making the most of the electric car structure which should inherently be better at standing up to collisions:

“Tesla has done a great job of playing the structural benefits of an electric vehicle to its advantage. Impact performance is enhanced by the absence of a mechanical engine and the car’s low centre of gravity. The Tesla Model 3 really benefits from its all electric-architecture.”

The car is not completely bulletproof, however. While the Model 3 excelled, or at the very least, was average within three of the four categories, it seems to have suffered in the Vulnerable Road Users section. The report stated that:

The protection provided by the bonnet to the head of a struck pedestrian was mixed. There were large areas where protection was adequate but poor performance was seen at the base of the windscreen and on the stiff windscreen pillars. However, the protection provided to pedestrians’ legs and pelvis area was good at all test locations. The Tesla 3’s AEB system can detect vulnerable road users like pedestrians and cyclists, as well as other vehicles. In tests of its response to pedestrians, the system performed well. In tests of its response to cyclists the system scored full points.

Here is a video of the Model 3’s crash tests:

What do you guys think of the test results? Let us know down in the comments below.