At long last, Tesla’s longest-tenured vehicle has gotten a much-needed update. While the new Model S refresh doesn’t drastically change the electric sedan, it does breathe some new life into one of Tesla’s premium offerings. With more and more automakers releasing plans for their own electric luxury sedans, it is now more important than ever for Tesla to keep their cars fresh. 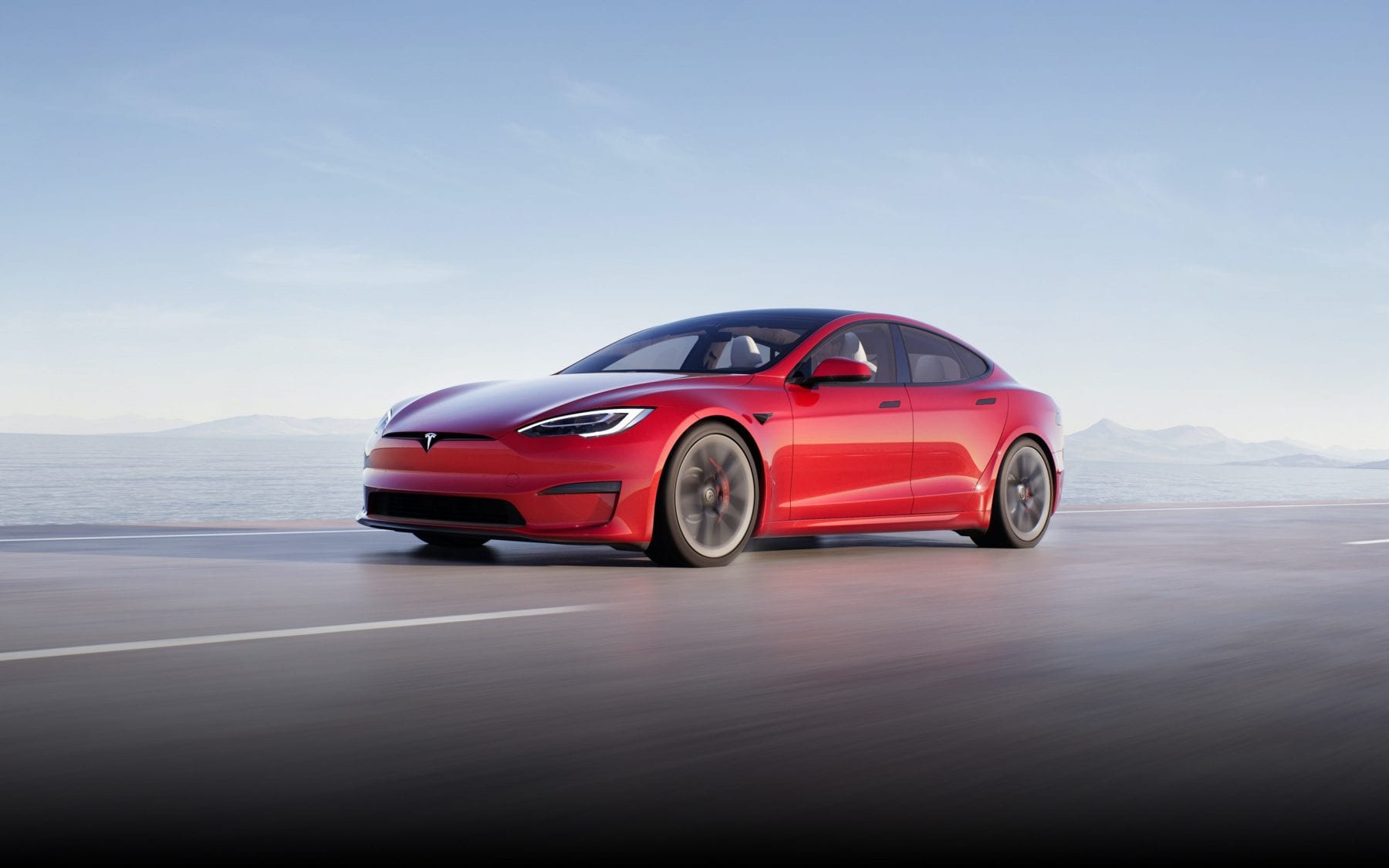 The new Model S refresh comes with quite a bit of changes. While you wouldn’t really be able to tell much of a difference from the outside, the changes made to the interior are actually drastically improved.

The scope of the changes made in the new 2021 Tesla Model S interior refresh was surprising when first unveiled. Starting from the steering wheel, well, it’s missing a whole piece. The new Tesla yoke steering wheel is reminiscent of one found in race cars, invoking a feeling of high-performance. There are also no stalks behind the steering wheel as all of the functions are mapped to buttons found on the steering wheel, similar to what is found in current Ferraris. Without stalks, changing gears in the new Model S is a bit unique from most vehicles on the road.

The center console has also received a big upgrade, ditching the old vertical orientation screen. Rather than sticking out like in the Model 3 and Y, the new horizontal screen is embedded within the dash with a slight tilt mechanism. The new screen is obviously better for media consumption and Tesla has been advertising the center screen as having current-gen gaming console performance.

Other features on the Tesla dashboard include the air vents from the Model 3 and Y. This of course gives the dash a cleaner feel as it lacks the traditional obtrusive vents found in every other vehicle. 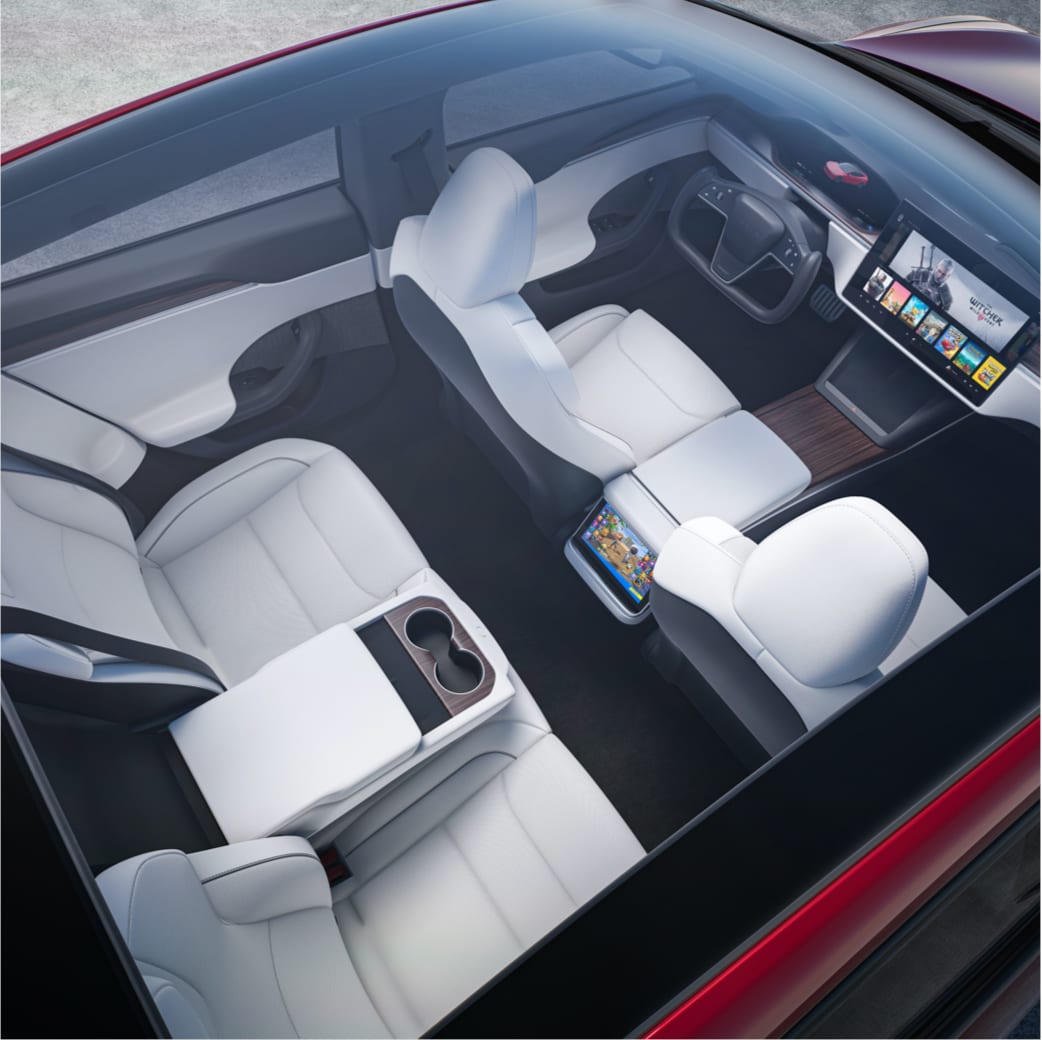 The rear of the cabin also received an update with a new rear console as well as an 8-inch screen. It looks to be as capable as the front screen, but we can’t imagine gaming while looking down at that angle is comfortable. Lastly, there are no more latches on the inside of the Model S doors, buttons only, just like the 3 and Y.

Along with the new Model S’s design changes, performance has also seen an increase. According to Tesla, the battery modules, battery packs, and drive units were updated. Surprisingly, the Model S refresh still appears to be using the old 18650 cell rather than the newest 4680 or even 2170 cells found in the Model 3/Y.

Nonetheless, there appears to be some improvements in chemistry or thermals as the Model S refresh does see a boost in its range. The Long Range Model S will have a range of 412 miles with a top speed of 155mph and a 0-60 time of 3.1 seconds.

The real improvements are seen in the Plaid versions of the Model S refresh. The previous Performance version has gained a third-motor and the ‘Plaid’ name. With this extra motor, the Model S Plaid is able to hit 200mph with a 0-60 time of 1.99 seconds. As a result of this extra performance, the range suffers slightly, going down to 390 miles.

The Plaid+ is a whole other animal yet. The long-rumored Tesla is still a year’s away, but it promises insane performance. While it only slightly beats the regular Plaid in 0-60 time with “<1.99 seconds" and matches its top speed, the Plaid+ will offer over 520 miles of range. As of writing, this will secure it as the quickest production car in the world and highest ranged EV. The Plaid+ will be able to leverage this extra power thanks to the use of Tesla's new 4680 battery cell.

The 2021 Model S refresh is arguably the largest refresh done to any Tesla. For years, Tesla has boasted about making incremental changes and additions to their vehicles as they see fit rather than taking the traditional automaker route of modifying production just once a year. This time however Tesla made a list worthy amount of changes:

Tesla has been working their way up to making their cars competent gaming centers. Over the past years, the brand has built up a Tesla Arcade through its continuous software updates. The games were simple at first, but have progressively been getting more full-featured.

With the new V11 update which we first caught a glimpse in the Tesla electric truck reveal in late 2019, the company looks to continue raising the bar in regards to in-car gaming. The press images for the Model S refresh show the Witcher 3 on the center console, and Musk has stated that the car should be able to run Cyberpunk 2077. Both of those games are a considerable step up from anything Tesla has pushed thus far through their updates.

In an effort to make the cabin of the refreshed Model S more enjoyable, Tesla has updated the sound system. There are 22 speakers located throughout the car as well as new microphones to enable active noise cancellation, blocking out a lot of the road noise. Think of AirPod Pros, but for your car.

With the updated dashboard Tesla did away with visible A/C vents. While this ventless design has been on the 3/Y for a while now, the sleek air conditioning was absent on the Model S and X. The new setup will make it appear like air is coming from the screens in the dashboard, amazing all of your friends who aren’t privy to your car’s secrets.

The system now has three-zones of control and retains its preconditioning functions as well as heated seats.

The refreshed Model S steering wheel has been a topic of controversy for more reasons than one. Aside from its missing a whole side, Tesla has done away with the stalks. As such, the Model S will figure out which gear you need to be in via its camera system and switch to it. Figuring out which gear you need to be in shouldn’t be too difficult for a car that intends to drive you autonomously one day. There will undoubtedly be some hiccups however and so a manual override is offered on the cars display. You can also disable the feature entirely if you prefer living life on the safer side.

As said before, the Model S refresh exterior has not seen much change. In fact, unless you are a seasoned Tesla veteran, you might not be able to tell the difference between a refreshed model and one from last year. The largest visual difference is in the front fender which has gained some extra body creases. There were also small changes made to the secondary lights on the bottom corners. 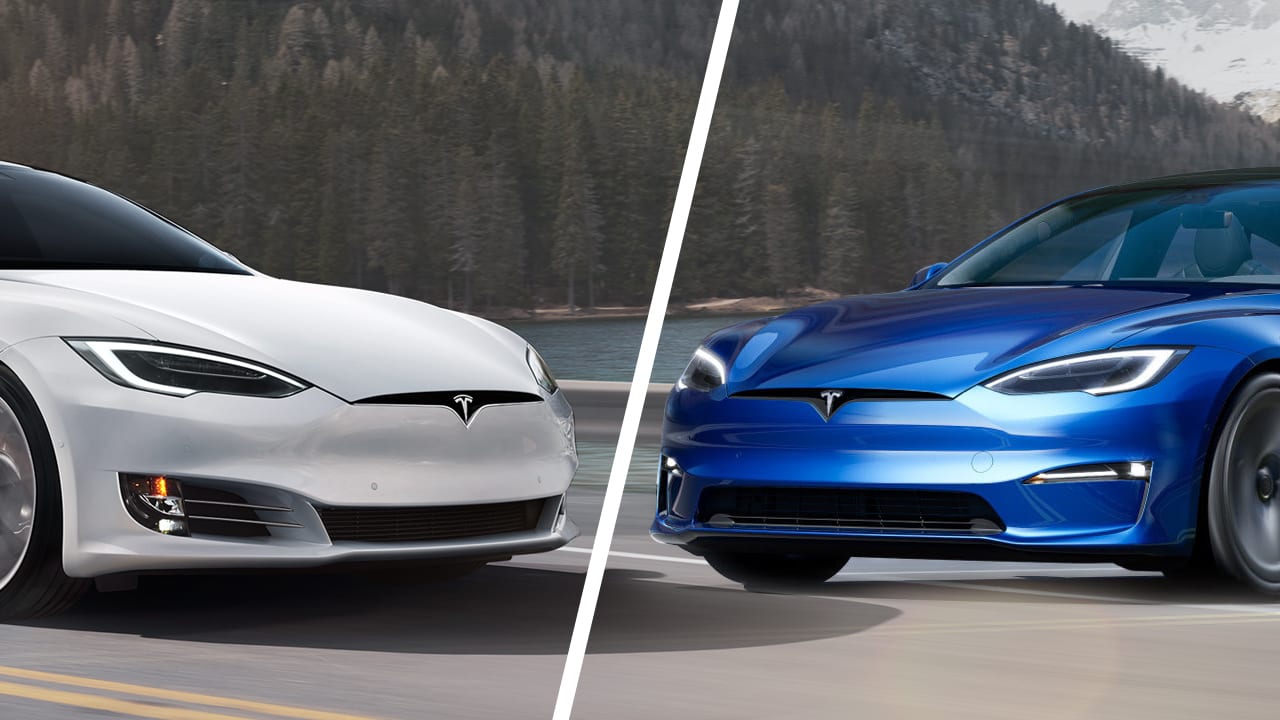 The headlights and taillights also appear to have been updated to be brighter and sleeker. The refreshed Model S (and X) have joined the Model 3 and Y in ditching the chrome trim pieces. You will notice that both the trim around the windows and door handles are blacked out, forgoing that heinous shiny material. (sorry chrome lovers). Also, while not exactly an exterior body panel, the refreshed Model S does offer a different wheel that was not found in the previous version.

So it’s not much of a change, and if you were hoping for a major design shift you are probably disappointed. However, the interior features enough changes that you might be tempted to overlook the minimal changes.

The Model S refresh release date was revealed alongside the car itself during Tesla’s 2020 Q4 earnings call with an estimated timeline of mid-2021. Production lines for the Model S and X were quickly put on hold while the company prepared for the changes. 2021 Model S refresh deliveries have not yet begun but many have already been seen in transit on their way to new owners.

All of these updates did not come for free. The Model S refresh price actually received a substantial increase of about $10,000 from the previous version. Tesla’s earnings show that production capacity of the Model S and X has increased from 90,000 to 100,000 for this year, so it would seem like the company believes that there will be increased demand despite the increase in price. The current base prices are as follows:

The Model S Plaid+ was actually unveiled with a starting price of $139,990 which was later increased an additional $10,000. For those waiting for the Plaid+, your wait is going to be longer as it was also delayed to mid-2022.

A Tesla Model S refresh vs old models is sometimes hard to compare. Unlike other automakers who make annual changes to their vehicles, Tesla opts to make incremental improvements and additions spontaneously throughout the year. Important things like the latest autopilot hardware or MCU were added as singular additions mid-year with no warnings. As such, a 2018 Model S can be found with either MCU1 or MCU2 simply dependent on the month it was purchased.

Throughout the companies history, there has only been three significant enough changes to warrant the “refresh” namesake. The Nosecone, Facelift, and Raven are all variants of the Model S that came before the 2021 refresh.

The Model S’s second notable update occurred in mid-2019, but instead of being a design refresh, it was an engineering one. While the skin of the Model S remained unchanged, a large portion of the powertrain had been updated, codenamed ‘Raven’. Essentially Tesla had taken the more powerful and efficient permanent magnet synchronous reluctance motor found in the Performance Model 3, and replaced the old induction motor found in the front of the Model S. This allowed for a notable increase in power and range for the Tesla Model S Raven. In addition to the powertrain upgrade, the Raven Model S also received a new adaptive suspension which allowed to switch from comfy casual driving, to lowered and stiff performance sprints.

After being on the market for about four years, the Model S received its first real notable update. In 2016 the Model S lost its black nose cone and gained a sleeker appearance that was more in line with the recently launched Model X. To date this has been the largest aesthetic change the Model S has received. Along with the nose change, the Model S had its headlights and its charger upgraded. It also gained a HEPA filter that was first introduced in the Model X, allowing for cleaner air entering the cabin. Additional wood trim options were also offered with the facelifted Model S.