Tesla, now a household name in both the technology and automobile industry, found themselves revolutionizing new cars as a whole with their introduction of OTA (over-the-air) updates. For owners and those in the know, Tesla software updates separate the company from all others. Through WiFi and LTE networks, the company is able to push out updates to cars wirelessly, just like your cell phone. Taking full advantage of this compatibility, Tesla thought it best to focus on software features in order to have a competitive edge against the rest.

New features are consistently added to vehicles making your used Tesla feel new again with each update. Games, Netflix, YouTube, and an on-board Tesla Dashcam are all things just recently introduced via OTA. The full list is seemingly never ending with hundreds of updates introduced over just the last couple years.

For the most part, rather than introducing singular large updates, they are typically scattered throughout the year with new features added as the company develops them. However, once in a while Tesla decides to overhaul their interface resulting in a jump up in version numbers. Presently, all compatible Tesla’s use the companies V10 software.

V10 introduced a new UI and features such as Tesla Theater, Tesla Arcade, Smart Summon, Caraoke, and many more. Additional features like new games were added later throughout the years in smaller updates.

The Tesla V11 update is set to be Tesla’s next big bundle of software changes resulting in an entire UI overhaul and possible new features. 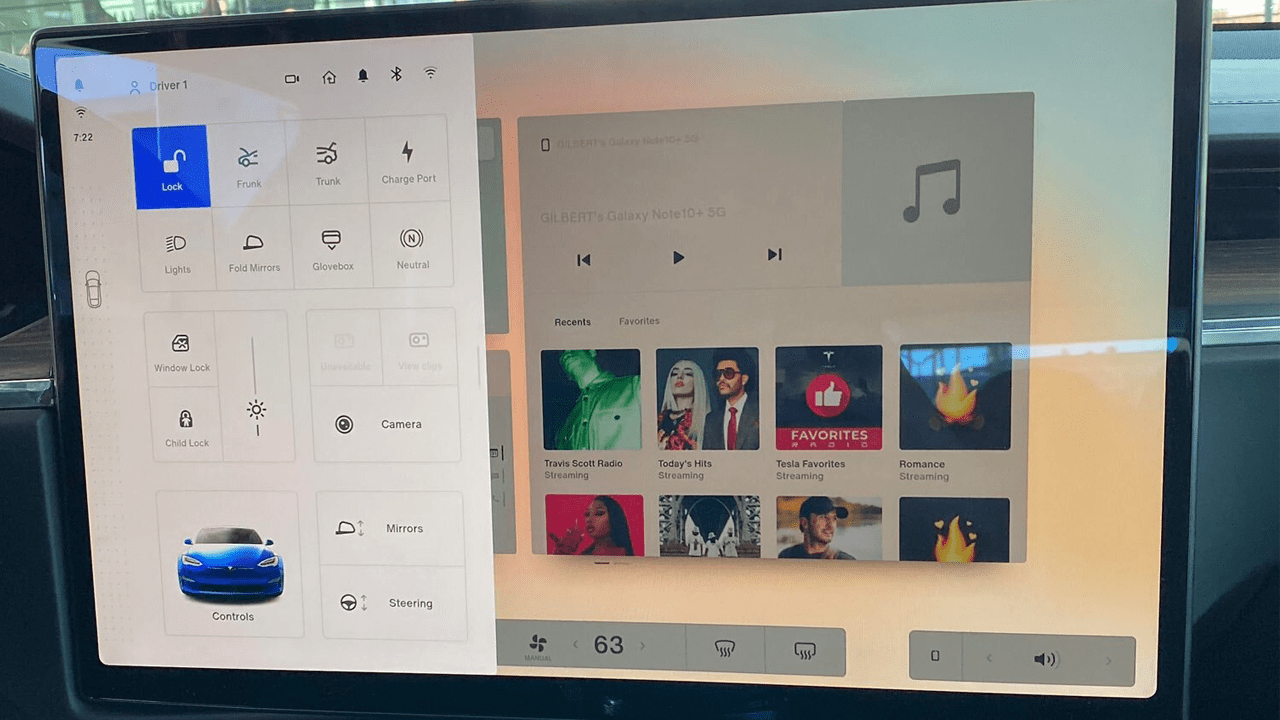 This small glimpse of V11 doesn’t give us the whole picture but we can see a few new features. The first obvious change being the new Tesla UI with an updated modern design. Throughout most of Tesla’s life, the UI focused on maps and navigation. With FSD reportedly around the corner, Tesla is seemingly leaning away from focusing on a large maps display and instead is making entertainment features front and center.

The default screen can also be seen with a section linking your phone. Its calendar, texts, and calls are all front and center in their own block. A/C and heating controls are familiar residing in the same location near the bottom of the display.

The cute column on the left side of the default screen is rumored to be the Model S’s manual gear selector. As we know, the Model S refresh comes with no gear selector and instead will rely on automation to pick which direction it thinks you want to move in. In the settings we can see a new feature dubbed “Smart Shift” and can only assume that is the button needed to enable or disable the automatic gear selection.

Like the Model 3 and Y interface, most basic controls can now be found on the left side, now being swiped out instead of constantly there. 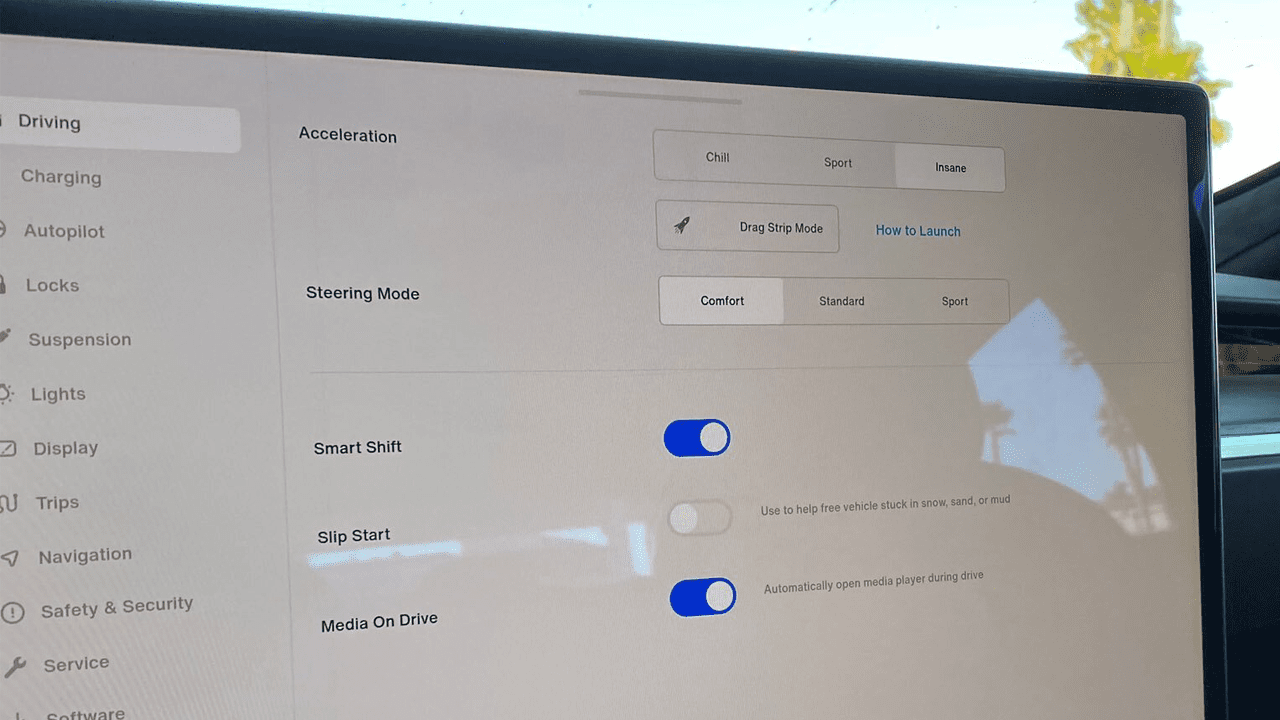 A new acceleration mode of “Insane” can be seen in the leaked images. The car seen is speculated to be a refreshed LR Model S so we assume that will be the new performance option while the Plaid and Plaid+ have the additional Ludicrous Mode, and possibly a fourth Plaid Mode for the track.

During Tesla’s build up to their annual Holiday Update, Elon Musk claimed it would be two Fire Emoji’s worth of fun. After the release, he claimed it was only one Fire Emoji leading owners to believe a part two was to come. Months later, Tesla updates have bin slim with the focus mostly being on small improvements. Could V11 be the part two of Tesla’s Holiday Update?

Elon Musk has also been touting the further expansion of the FSD Beta program with a simple activation button added to compatible cars with the FSD package purchased. That release is now confirmed as delayed until April. It would not be unreasonable for Tesla to group that feature into the V11 Update.

The images of Tesla’s V11 update were gathered via a now deleted post to Reddit showcasing a first glimpse of the refreshed Model S. V11 has been expected by us since the reveal of the new Model S with images on Tesla’s site showcasing the car with a new UI. With that car now on its way to customers, we expect to see V11 on the road in a matter of weeks. However, it should be noted that nothing is confirmed and Tesla could very well ship the refreshed Model S’s with V10, introducing V11 later on.

As for when the rest of the fleet will get this Tesla UI update, nothing is certain. It could very well come alongside the introduction of the new Model S and X or it could also never even be seen outside of Tesla’s premium models. We expect the refreshed Model S/X to be using the more powerful MCU3 eventually leaving some features incompatible to older vehicles, as seen with the transition from MCU1 to MCU2. For example, the new Model S is boasted as having a gaming PC built in with images showcasing the ability to play Witcher 3. Simply out of compatibility, we don’t expect something like that to be received across the whole fleet of used Tesla’s.

With rumors and speculation guiding hope, we expect Tesla V11 to be released sometime in early April.