Many claim Tesla makes some of the most popular cars in the world, but if that were true, why doesn’t anyone want to steal them?

According to the Highway Loss Data Institute, the 2016-2018 Tesla Model S & Model X were among the least stolen vehicles, only beaten by the BMW 3 series. The institute claims that this is due to electric cars typically being stored in garages where they are charged, but that begs the question of where the other electric cars on the top 20 list are if that truly is the case.

Two of the vehicles on the least-stolen list are the Tesla Model S and Model X. Their low theft rate may be related to the fact that, as electric vehicles, they are usually parked in garages or close to a house to be near a power supply. In a separate report last year, HLDI showed that electric vehicles from a variety of manufacturers have lower theft claim rates than comparable vehicles.

The fact is, Tesla themselves have done a substantial amount to earn their position on this list and it does not just fall under another one of those electric car benefits. Even stolen Teslas have an incredible recovery rate. According to the National Insurance Crime Bureau, 112 out of 115 stolen Teslas were recovered from 2011 to May of 2018. In comparison, the overall recovery rate for all vehicles in 2016 was just 58.4%. 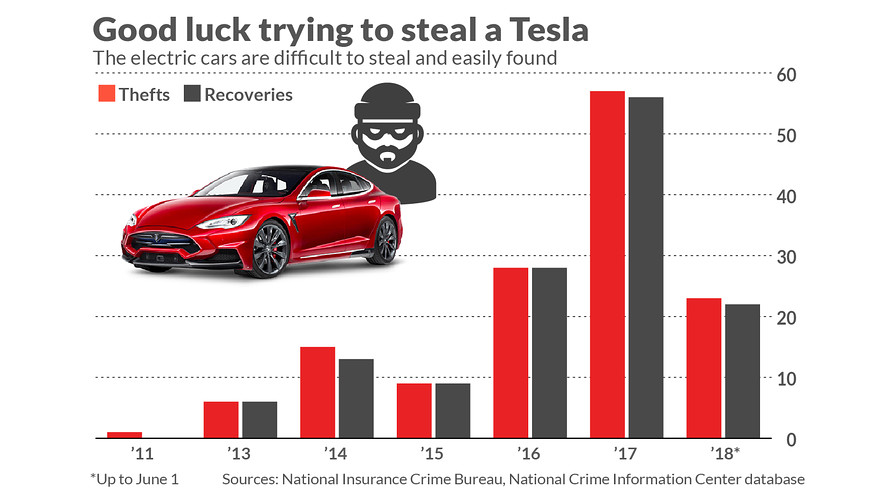 “That’s about as good as it gets. I’m wondering if the thieves’ intellect might have been overwhelmed just sitting in a Tesla, much less figuring out how to operate it for any length of time.”

So why exactly are Tesla thefts so uncommon with recovery rates leading the pack? Well, for starters, there is no true way to “hot-wire” a Tesla or most new cars as they often require highly advanced keys to operate. With proper skills, someone could use a relay attack to bypass that requirement, but there are methods put in place to prevent this that we will get into shortly. While the vast majority of new cars fall under the same category as Tesla, Tesla still outshines in both minimal thefts and recovery rate, and that is due to three important Tesla security features: Sentry Mode, Pin to Drive, and GPS Tracking.

GPS tracking has been a Tesla security feature from almost the beginning. From within your car’s phone app, you receive real-time data on your cars location. If a Tesla is ever stolen, owners can use their phone to tell officers exactly where their car sits. It has happened plenty of times already and most likely accounts for a large portion of the recovered stolen Teslas. The only downside to this feature is that in order to save battery, the car only updates real-time while driving. A knowledgeable thief, in theory, could also remove the cars SIM card to prevent tracking altogether.

Lets back up a bit and look at some of the preventative measures the company has in place to prevent Tesla theft to begin with. Tesla’s Sentry Mode is there to deter thieves away from even the idea of stealing the car. Enabling this feature will leave your Tesla in a monitoring state. The two side cameras, front camera, and sensors will remain active even with the car off. The Tesla sits observing its surroundings ready to notify you and any individual too close to the vehicle in the unlikely event of a theft in progress. The display flashes a “recording in progress” message, and it does just that. For the majority of thieves, this is enough to reconsider, and those who do not simply get caught.

In this example, lets say a knowledgeable and confident thief was able to successfully accomplish a relay attack, ignores the recording in progress, and pulls out the cars SIM to prevent tracking. The thief will still have trouble driving away thanks to the Pin to Drive feature. Recently added to counter relay attacks, this Tesla security feature requires you to enter a pin in order to start your car. The location of the pin-pad even shifts with each startup in order to prevent reading of finger print smudges. The only way to reset the pin is to enter your Tesla account credentials.

Using the owners account credentials is just about the only way to drive away with a stolen Tesla. Fortunately, most petty car thieves lack the mental capability necessary to hack into your Tesla account through either phishing, social engineering, brute force, ect. You are pretty much safe from theft in a Tesla, except…

Most cars are stolen to be disassembled and sold part by part. Thieves do not necessarily need a running car to turn a profit. A more organized group can just tow your car away with little to no issue whatsoever, but Tesla has a solution for this as well. Late last year, the company began offering an aftermarket security feature dubbed Enhanced Anti-theft. For $460, your car will detect movement inside the vehicle, but more importantly, it also senses shifts in the vehicles movement. Basically, if someone tries to tow your car or even enter it without a key, the alarm will sound. The feature is currently only available for the Model S & Model X.

The simple fact of the matter is this: Teslas are some of the most secure cars made today. Features and improvements are constantly being added through over-the-air software updates to keep up with the present day. There is very good reason as to why these cars are not stolen often, and it is definitely not because they are bad. Tesla continues to stand among the best of them, a leader in the industry in just about every category.

If you do not yet own a Tesla or would just like to protect yourself further, we recommend a Faraday bag for your key fob. When stored in the protective sleeve, this will prevent RF signals from reaching the fob, effectively preventing relay attacks. Currently, relay attacks are the most popular way to steal newer cars and a majority of consumers do not have the preventative measures of safety features assigned with Teslas.

$5,000 Canadian Tesla Rebate – Everything You Need to Know