Welcome to our weekly Tesla news recap where we discuss and share the latest Tesla news. If you don’t have the time to constantly monitor Tesla and their ever-changing company and products, this is for you. This week we saw a plan to double Superchargers around the globe, new info and release date on Supercharger V3, a possible Mercedes-Tesla collaboration on a van, and more.

Supercharger Network to Double in 2019

Tesla Supercharger capacity will double by end of next year. Expect to be within range of 95% to 100% of population in all active markets.

We reported back in June when Tesla surpassed 10,000 Superchargers. Since then, the momentum has not slowed down. We currently sit at 11,414 chargers with 1,375 stations. Now Elon has taken to twitter to announce an acceleration of the networks expansion. According to the main man himself, the Supercharger network will double by the end of next year and will reach 95% to 100% of the populations in active Tesla markets. The US Supercharger network already covers 99% of the population so we will just assume that the majority of this expansion will be done overseas in European and Asian markets. This is a pretty ambitious goal especially when they failed to hit all their previous network expansion goals. We were supposed to be at 18,000 stations by the end of this year… We will just have to wait and see if they pick up the pace. 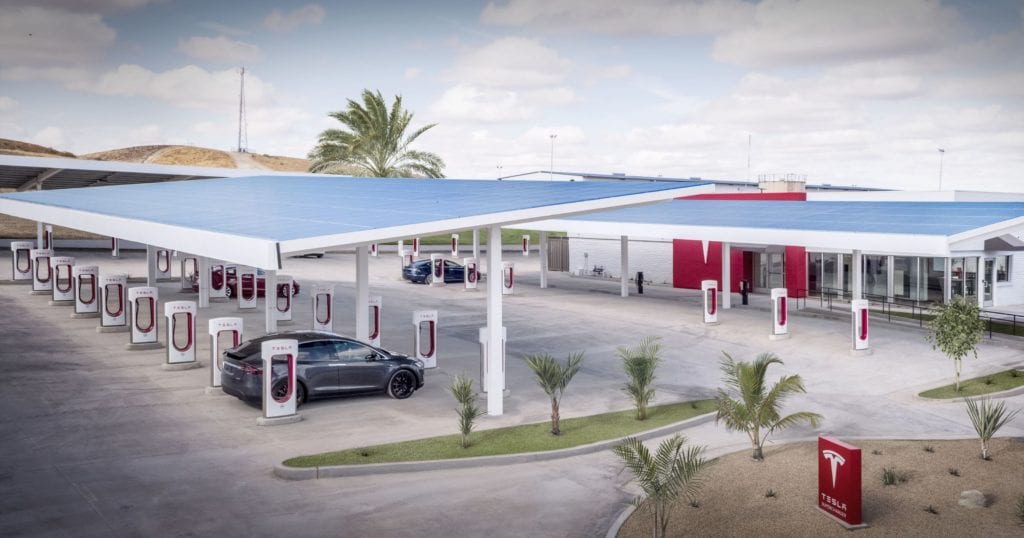 Delay after delay after delay, we finally have a new timeframe for Tesla’s Supercharger V3. First announced as an early Christmas gift almost 2 years ago, Supercharger V3 was set to have a power output of over 350 kW. The twitter crowd cheered but was soon let down once more by Tesla’s early claims. During the ’18 Q1 conference call, Musk backed down on his initial tease.

“The thing about a 350 kW charger is it doesn’t actually make a ton a sense – unless you’ve got a monster battery pack or have like a crazy high C-rate, in which case your energy density is going to be poor.”

The new goal was set at 200 to 250 kW for consumer vehicles. This was also a jab at Porsche who had recently announced their 350 kW stations to expand across their dealer network.

We then received the timeline of “late this summer” from the main man himself. Well summer came and went and we now have a new timeline of “early next year”.

Supercharger V3, which starts rolling out early next year, will also charge much faster

Apart from charging speed, we also know Supercharger V3 will utilize solar power and Tesla Powerpacks to take most stations off-grid. No word on when or if we will see the automated charging arms.

As for Supercharger V4+, Musk sees the tech heading 3 to 4 times faster. The initial charging time goal, set back in 2013 by the Tesla CTO, was 5 to 10 minutes. Supercharger V3 should double our charging speeds but we are still a ways from the initial goal.

“It’s not going to happen in a year from now. It’s going to be hard. But I think we can get down to five to 10 minutes,”

It’s important to note that current Teslas are capped at 120 kW charging so to take advantage of V3 you will most likely have to wait for an update to the model line. I’m hopeful that Tesla will offer an upgrade to current and past vehicles so everyone can take advantage of faster charging.

From helping customers find parts to fully shifting resources from sales, Elon has been on a service spree this week. Teasing a few app updates, many, including I, are excited about. You haven’t been through hell until you’ve waited an hour long for a 30 second call with Tesla customer service. Elon seeks to fix that, at least for some service related inquiries, through an app update. This theoretical update would allow you to request a Tesla Ranger at the touch of a button for certain already defined issues. Basically anything common that doesn’t require a lift. He also went on to state that estimated time frames and service stages are already stored internally and can be pushed to the app. This update can’t come any sooner as hold times have been getting longer and longer with more cars being sold than ever before. You could always just schedule an appointment online through your Tesla account but I’ve had a couple issues that were able to be fixed with just a call. A very long call.

Shifting resources from sales to service for next several days 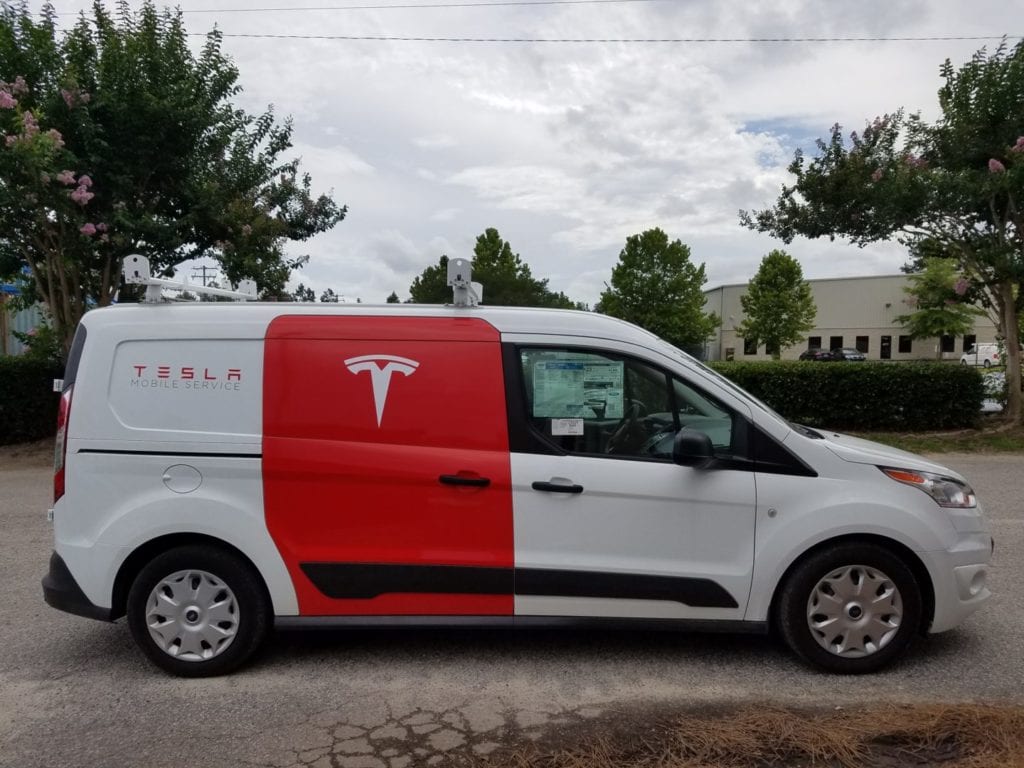 Just a few weeks ago we reported that Daimler CEO, Dieter Zetsche, would be opened to working with Tesla once more. For those that don’t know, Daimler, Mercedes parent company, and Tesla have worked together in the past. They actually owned a 9% stake in Tesla. During that partnership the two collaborated on the Mercedes-Benz A-Class E-Cell, B-Class Electric Drive, and Smart ED. It seems that Elon has responded to working together via twitter.

Maybe interesting to work with Daimler/Mercedes on an electric Sprinter. That’s a great van. We will inquire.

Tesla currently uses gasoline powered vans (EW!) for all their commercial needs (parts and service). Swapping over to electric vans is a must if Musk wants to run a full electric company. Mercedes has yet to respond but a Sprinter van would most likely be just as good if not better than any other Tesla made van. The only problem? Mercedes is already working on an electric Sprinter, the eSprinter. You can read more about this possible venture here.

With V9 the Model S & X got a new UI to match that of the Model 3. Well now the design studio has also been updated to match as well. This new studio shows the base price after incentives and gas savings which I’m sure everyone can agree that it’s a tad bit dishonest. That price is assuming you qualify for the full rebate and are currently driving a Mack truck. They do provide you with a gas savings calculator where you can input your annual miles and price per gallon of fuel but the mpg is locked in at 21. According to Cars.com, the average mpg for the Large Cars segment is 23. Yes, the new design studio is modern and pretty and all but why the upfront dishonesty? 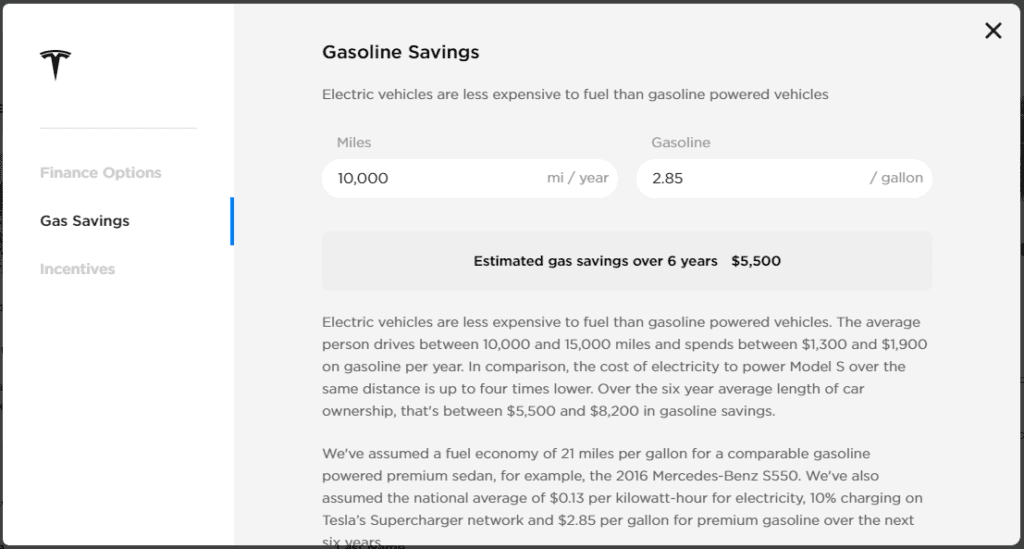