Audi has finally unveiled the 2022 e-tron GT and RS e-tron GT, a performance electric sedan that might be the best looking we’ve seen thus far. The e-tron GT is another step towards Audi’s goal of having 20 fully-electric models by 2025 and has been in the works for a while now. Following the release of the regular e-tron, how good is Audi’s next addition to the lineup?

The Audi e-tron GT is not purely an Audi as it was co-developed with the Porsche Taycan which rides the same J1 platform. While both aim to take provide a desirable electric performance sedan, the e-tron GT was meant to be an option for those that did not want to spend almost $200,000 on the top Porsche Taycan Turbo. That being said, the newly announced Porsche Taycan is actually cheaper than the e-tron GT, so pricing is a bit weird right now.

Regardless, the luxury/performance electric sedan segment is priming to be filled with some absolute heavy hitters in the near future, so do the e-tron GT and RS e-tron GT stand a chance? 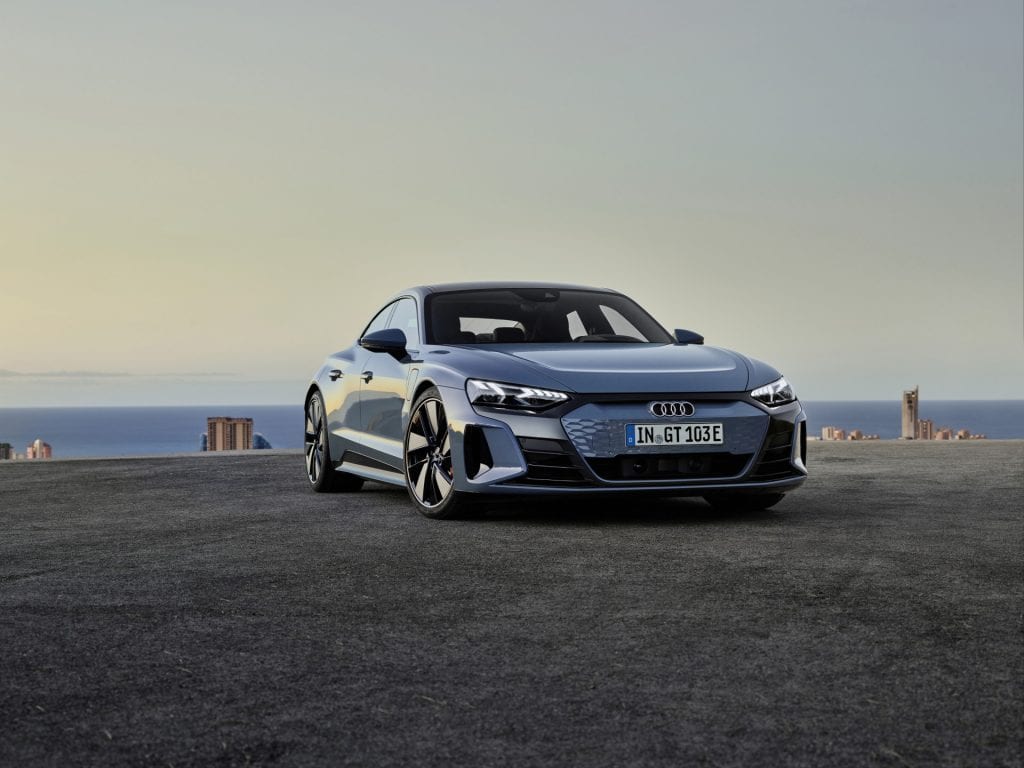 Full disclosure, I have always been a fan of the Audi and its designs since I was a child, so my opinion of the design is probably more biased than the average. That being said, through my quick look at the general opinion of the car, the design definitely seems to be a strong point, so I don’t think I would be out of line for saying that I love the look of the e-tron GT and have loved it since they first showed it years ago. Audi describes the design as such:

The exterior of the Audi e-tron GT is a dynamic work of art. Each surface and each line is harmonious, from the headlights, which are available with Audi laser light upon request, to the large diffuser at the rear. In combination, the details create a sculpture that looks like it was shaped by the wind. The body line is extremely aerodynamic, and the drag coefficient is just 0.24. The interior also corresponds to that of a classic gran turismo: The driver and front passenger seats are installed in a sporty low position and separated by a wide center console, and the rear seats provide sufficient space even for adults. The progressive elegance of the interior design emphasizes the car’s character.

The car looks absolutely mean and has two of my favorite recent design trends: aggressively sloped rooflines and rear lightbars. Along with the slippery body shape, Audi makes use of other popular aerodynamic features such as an adjustable spoiler and adjustable air-inlets to control the airflow better, getting its drag coefficient down to 0.24. 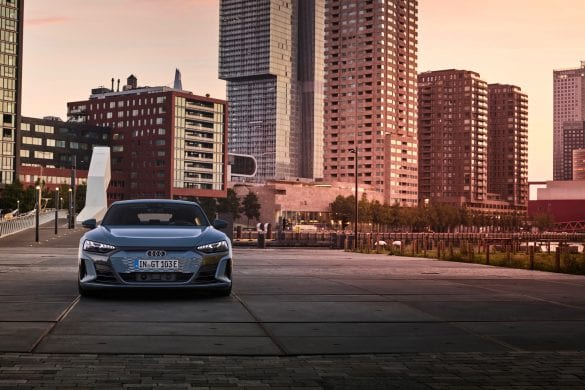 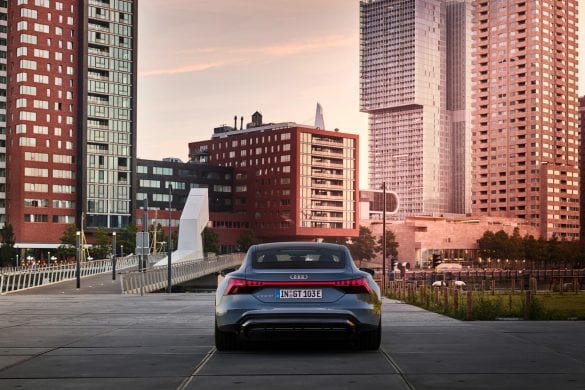 Looking at the interior of the e-tron GT, Audi has continued to rebuke the trend of minimalistic interiors in new electric cars and instead has gone for a familiar amount of buttons and screens as their gasoline-cars. The center console is aggressively tilted towards the driver, once again to emphasize the performance aspects of the car. The interior features a singular 12.3″ screen in the center along with a 10.1″ screen behind the steering wheel as well as a heads-up display. 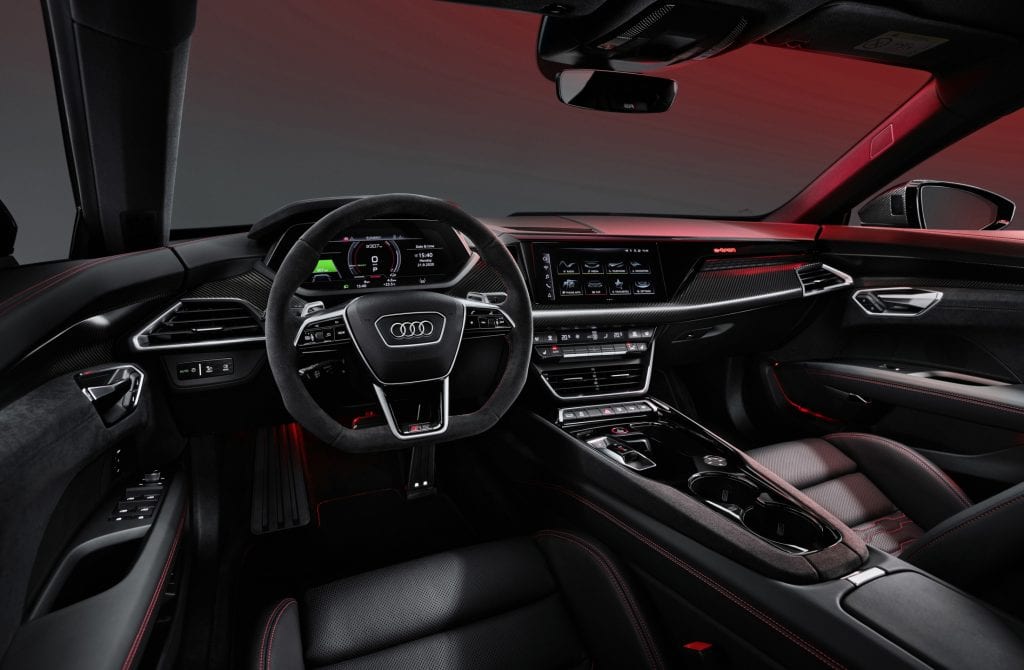 While the overall design of the interior isn’t a significant departure from Audi’s gasoline cars, the e-tron GT offers a leather-free interior option that makes extensive use of artificial and recycled materials.

The sport seats plus with 14-way adjustment are upholstered either with a combination of artificial leather and the Kaskade material or with a mixture of artificial leather and the microfiber material Dinamica. Recycled materials are used in both cases, for example polyester fibers that were made from old plastic bottles, or textiles, or residual fibers from selvages. There are 119 recycled plastic bottles in each Kaskade upholstery set. The Dinamica material is similar to Alcantara, while the Kaskade material, whose seam design is based on the look of the Singleframe, is reminiscent of natural fibers such as wool.

Both the regular e-tron GT and RS e-tron GT use the same 93.4 kWh battery pack with 85 kWh of it being used to account for degradation.  Additionally, they both feature a dual motor setup, but as you can imagine the total output of the two motors is different for both models. While the front motor in both outputs an identical 235 hp, the rear motor in the e-tron GT outputs 429hp while the RS e-tron GT rear motor outputs 450hp. As with the Taycan, there is an over-boost feature that increases the total output past the normal rating of the car for 2.5 seconds. The breakdown is as follows:

The difference in performance looks to justify moving up to the RS if you want more performance, but without making the regular e-tron GT look like a slouch. Just like the Taycan, the e-tron GT forgoes a single-gear transmission and has a two-speed setup. 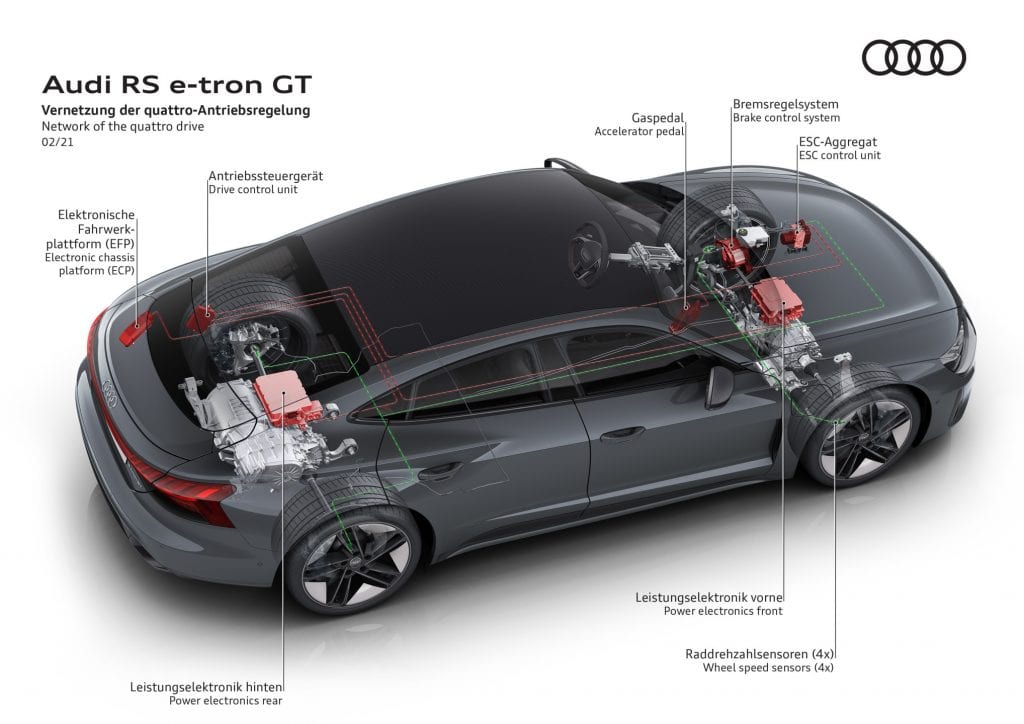 Due to the two-motor setup, the e-tron GT can come in drive all four wheels, which is kinda Audi’s thing. The brand has been advancing its quattro AWD system for decades now and the e-tron GT represents another step in that evolution. As with their mechanically driven system, the car will variably adjust the amount of power that is going to each wheel to compensate for the driving system. According to Audi, these changes in power can now be delivered five times quicker compared to their mechanical drivetrain, allowing for even more precise power delivery.

Range of course is not the best but it looks to be an improvement over what the EPA range of the Taycan is, although it might have not been as bad as we thought. Still, Audi looks to have thought ahead and have tentatively set the EPA estimate range much lower than the WLTP numbers (302 miles for e-tron GT and 293 miles for RS). As always, this will be the biggest contention to anyone who is considering buying this car. While we have made crusaded that the mid-200 mile range is more than adequate (especially if you charge overnight), it’s hard for people not to wonder why they are paying over $20k more for an e-tron GT while the Tesla Model S has almost double the range.

While it isn’t a leader in range, the e-tron GT at least is a leader in the charging, capable of charging at 270 kW, allowing for a 5-80% charge in about 22.5 minutes. 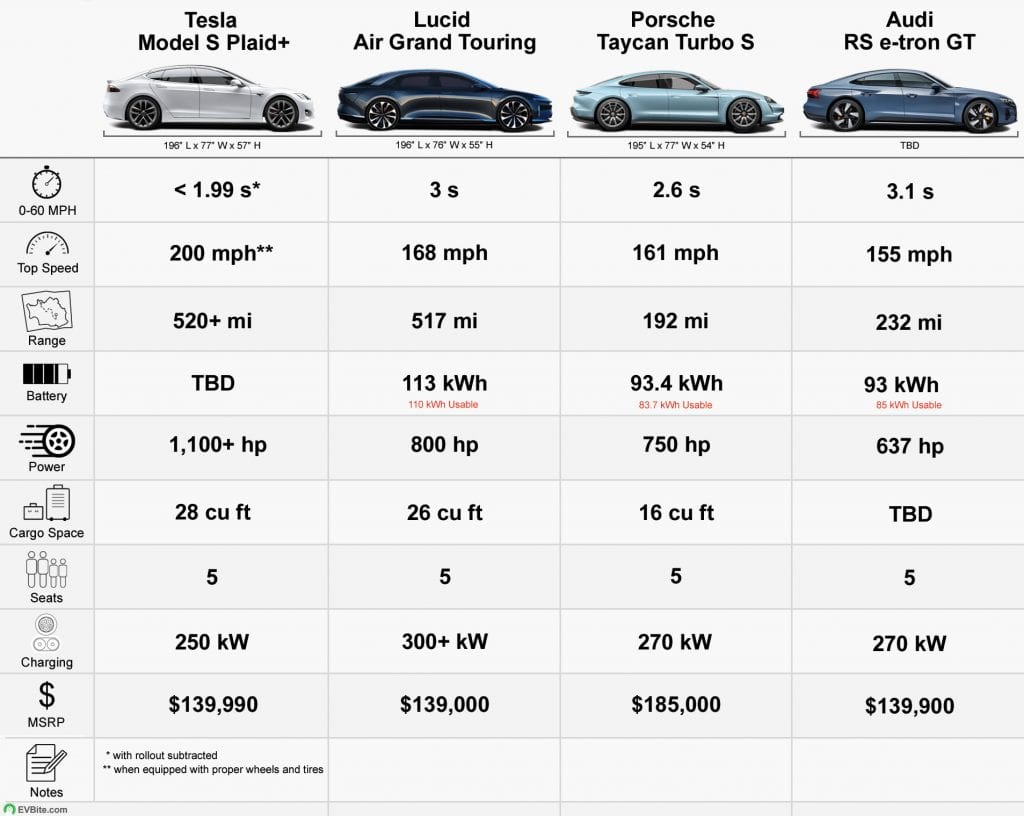 The Audi e-tron GT and RS e-tron GT will start production in the Böllinger Höfe factory where Audi makes their R8 supercar, ensuring their top-tier personal and equipment will be producing the e-tron GT. The small scale factory has been recently expanded out to deal with the fact that there is basically no part sharing between the e-tron GT and R8. The factory uses “100 percent eco-electricity, with a combined heat and power plant fired with biogas providing the necessary heat for the Böllinger Höfe.”

We can expect to see the e-tron GT on US shores this Summer. Pricing of different options will be given closer to release, but for the time being, we have these base prices. Prices do not include any possible rebates.

While the e-tron GT is considerably cheaper than the two top trims of the Porsche Taycan, it isn’t exactly an accessible car in terms of price. Pricing is all out of whack now as the e-tron GT overlaps the Taycan 4S and is more expansive than the new base Taycan. Although, there isn’t much of a performance drop for the Audi, it’s just a different flavor of styling, so it might have been unfair to assume that the Audi would undercut the Porsche by a real significant margin. As Porsche did with the Taycan there is still the option of releasing a single motor e-tron GT, but an Audi without quattro might not even be an Audi at that point.

What do you guys think of the Audi e-tron GT? Let us know down in the comments.