Has the Porsche Taycan Range Been Grossly Understated?

The Porsche Taycan range has been lackluster, to say the least, but is it possible that in reality, it’s not as bad as its 201-mile range EPA certification makes it out to be.

When Porsche announced its intentions to bring an electric car to market with the unveiling of its Mission E concept (which has not turned into the Taycan), both EV and Porsche enthusiasts were excited upon hearing the news. Porsche is a storied company that brings quality and competitiveness in everything they do, surely they would bring one of the most appealing alternatives to the essentially unopposed Tesla Model S.

The range was promised to be in the 250-mile range according to the WLTP, which while would not match the Model S, would still be a comfortable range for almost any driver in the world. But then the EPA testing protocols got their hands on the Taycan, and it was not pretty. It was bestowed a paltry 201-mile range which just seemed unbelievable to anyone following the development of the car.

How could it be possible for a car that starts at $150,000 to have an almost sub-200 mile range, especially when its main competitor is nearing a 400-mile range and is available for a fraction of the price?

Twitter, Reddit, and other random forums were all set ablaze in disbelief with reactions ranging from saying that range shouldn’t be an issue, to pronouncing the Taycan dead on arrival. Was the testing protocol flawed, or does no one aside from Tesla know how to make a battery and efficient motors? Tesla fans were able to chalk another point up for Musk while some Porsche reservation holders were rethinking their purchases.

Point of the matter is that the news has been so unbelievable for a brand such as Porsche that owners have now been conducting their own tests to see if their numbers are in line with what the EPA has provided. Two tests of note come from Autoblog and Nextmove. Both of these tests have pointed towards the conclusion that the real-world Porsche Taycan range might be substantially better than what is currently stated.

The first test we are going to look at was conducted by Dan Edmunds at Autoblog who had a two-tiered range test. To summarize, the first part of the test was done in the following setting:

It’s made up of suburban residential and arterial streets, along with a stretch of the Pacific Coast Highway. Speed limits range between 25 and 60 mph, with much of it in the 35-to-45-mph range. There are no outright freeways, but there are more than 100 potential stoplights and a couple dozen stop signs.

The total length of one “lap” of this course is 104.5 miles, the car was put into Eco-mode and the air conditioning was set at 72 degrees. To Edmunds’ surprise, the Taycan was able to complete two laps with 209.2 miles completed and a projected range of 78 miles, giving the Taycan a total range of 287.2 miles, a substantial increase over its 201-mile rating.

The second portion of the test was a more free-flow endeavor with no strict rules as Edmunds drove through several mountain roads. After this less scientific run (where the car was not in eco mode anymore, but normal) Edmunds had clocked 167.5 miles and was projected to have 86 more miles to go, an effective range of 253.3 miles.

He had the following remarks after completed testing:

For perspective, I have seen several other EVs — but certainly not all — best their rated range on this course by 20 percent or so. This result is significant because this is the first time I’ve seen a car crush it by over 40 percent. The mind boggles further when you consider that this particular Taycan Turbo rolls on massive Michelin Pilot Sport 4 summer tires instead of the workaday all-season rubber you normally see on EVs and hybrids.

It’s true that most EVs can exceed their rated range when driven prudently, but I’ve never seen this much margin on this course. Still, an EV’s published range is conservative by design, the result of lopping 30 percent off the number generated by the EPA test protocol. As it happens, 201 miles is exactly what you get if you take 30 percent off my 287-mile result. I’m not saying that my course mimics the EPA EV test pattern exactly, but maybe this result says something about the by-the-book nature of Porsche’s numbers in the context of the EPA procedure.

Up next are German Youtubers nextmove who compared the Porsche Taycan range with a Tesla Model 3 while driving on the autobahn.

In this scenario, a Taycan and Model 3 were driven on the autobahn for 171 miles with an average speed of 81 mph and a top speed of 93 mph. Long, sustained high-speed drives are a challenge for electric cars so it is understandable if an EV doesn’t reach its stated range in these conditions.

What was surprising was that while neither car reached their stated EPA range, the Model 3 suffered a far larger range loss in terms of percentage than the Taycan did. 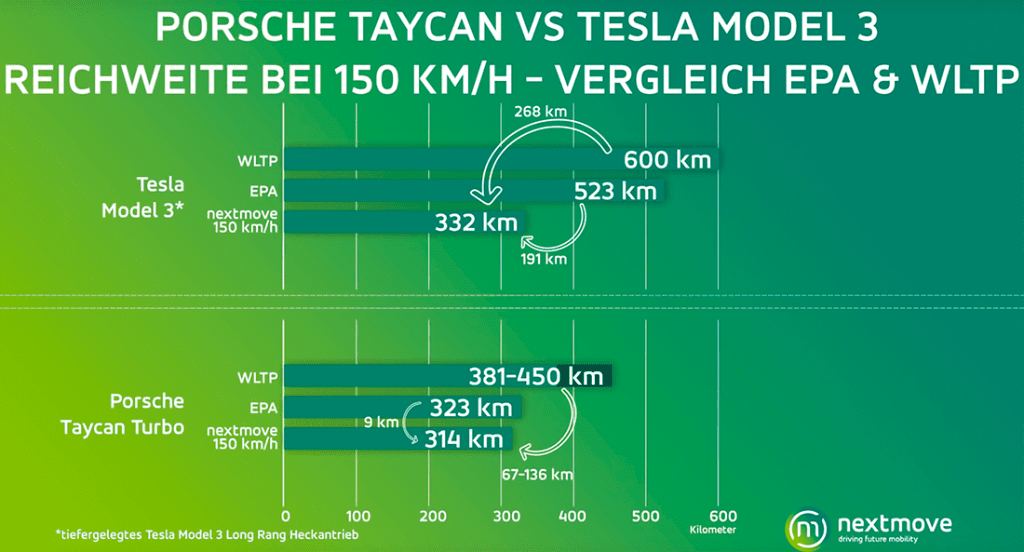 They Taycan only suffered a six-mile loss from its range while the Model 3 had a 119-mile drop in range. Full disclosure, the Model 3 tested was two years old, so about a 5% battery degradation could be accounted for, but its still a 36% drop in range, lending more credence to Porsche’s efforts into making sure the Taycan can perform in high speeds.

The problem, however, is that while these are just a few of the tests that owners have done pointing to a higher range, they continue to just be anecdotes. If the EPA grossly underestimated the Taycan, then maybe other cars have been underestimated. Until someone comes up with some sort of strict testing criteria that they have put multiple EVs through, we won’t really have a clear idea of what the real-world ranges of these electric cars are.

What do you guys think of the Porsche Taycan range? Do you believe that it is much higher than stated? Do you think there should be some sort of new testing criteria for electric car range? Let us know down in the comments below.