We have been following the development of the Sono Sion for quite some time now. The Sion was and still is one of the few cars who are trying to harness a notable amount of energy from the sun to increase the electric car’s range. Recently, the interior design of the Sono Sion was revealed, and yes, they kept the moss.

The fact that almost every body panel is laden with solar panels is not the only interesting quirk of the Sono Sion. During our initial look at the Sion, we noted that the concept interior had moss within the dashboard (which yeah, doesn’t take much of an eagle eye to notice). 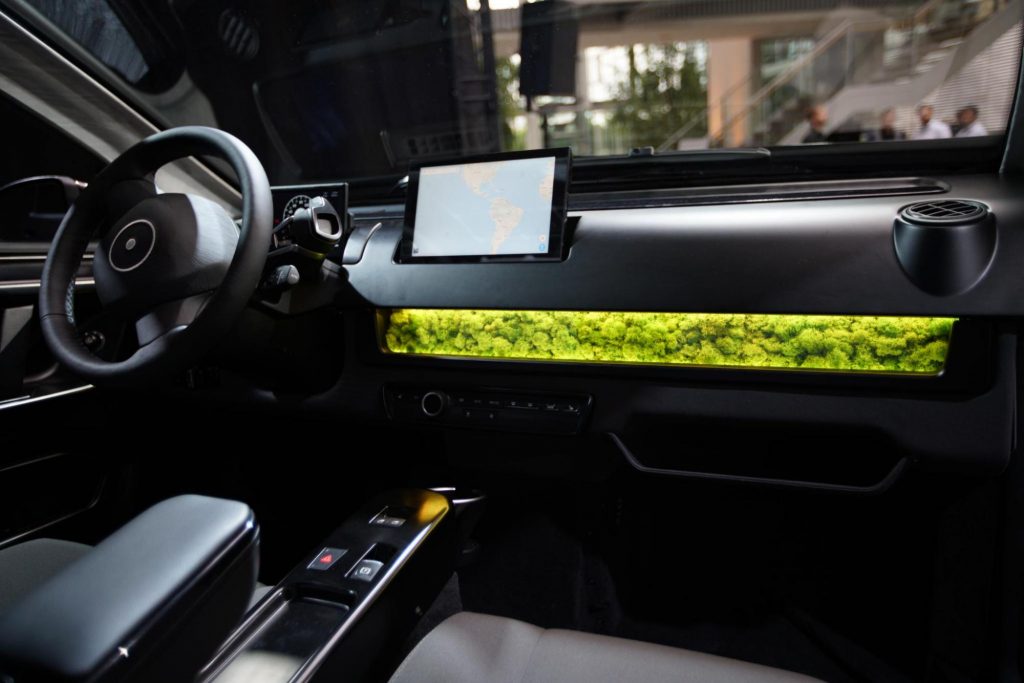 We thought that it was a feature similar to the koi fish swimming through multiple screens in Nissan’s Xmotion Concept, something that was cool for the concept, but wouldn’t make it to the production model. 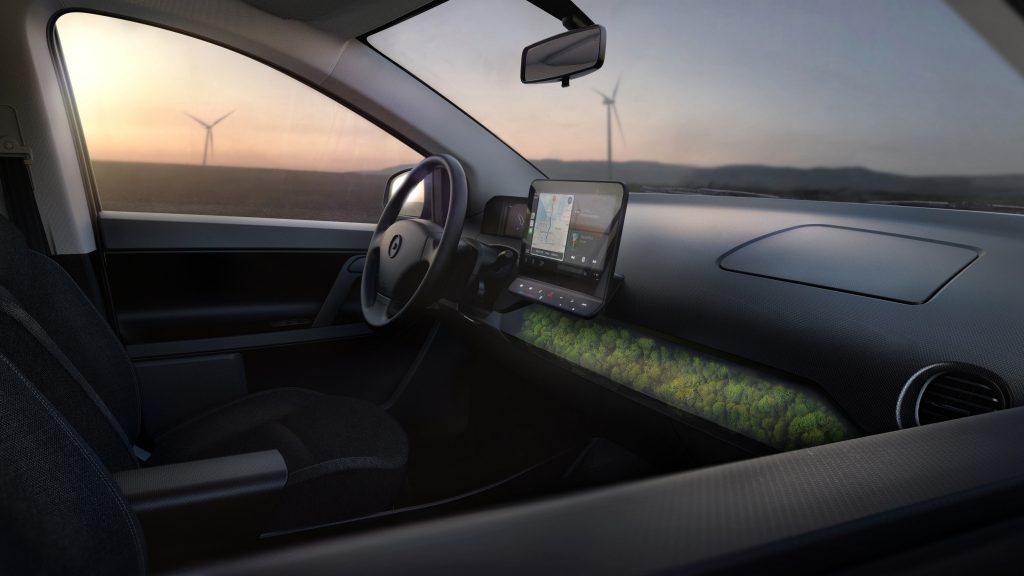 However, it seems that the newest images of the interior still have the moss in place and Sono has dubbed it “breSono”. They explain their reasoning in the FAQ page of their site:

Merely installing an artificial air filter in the Sion wasn’t enough for us, so we developed the breSono system. We’ve integrated moss into the dashboard and center console to complement the artificial air filter. Moss acts as a natural air filter, meaning that it continuously improves the interior air quality while having a positive influence on the car’s interior humidity. When testing the efficiency of the moss, we found that it filters up to 20 percent of particulate matter out of the air. You don’t even need to take any special care of it. Since the moss no longer has an enzymatic reaction when in this condition, it doesn’t have to be watered, fertilised, trimmed or exposed to sunlight. Whether it’s a hot summer day or the middle of winter, the moss in the Sion will remain how it is. The moss is also easy to replace during a regular filter change. We’ve tested the moss over a period of several years and couldn’t find any noticeable changes. Its colour stays highly consistent and retains its natural appearance throughout the years. Thanks to a special bleaching process, water is extracted and the microstructure that acts as a filter and controls humidity stays as is. This process also protects the moss against discolouration from external influences such as mould or bugs. In essence, breSono has the same properties as a sponge that controls humidity in that it either extracts it from the air or adds it to the air, depending on how moist the air is. If the air is dry, the moss provides extra moisture and its consistency becomes a little bit less soft. 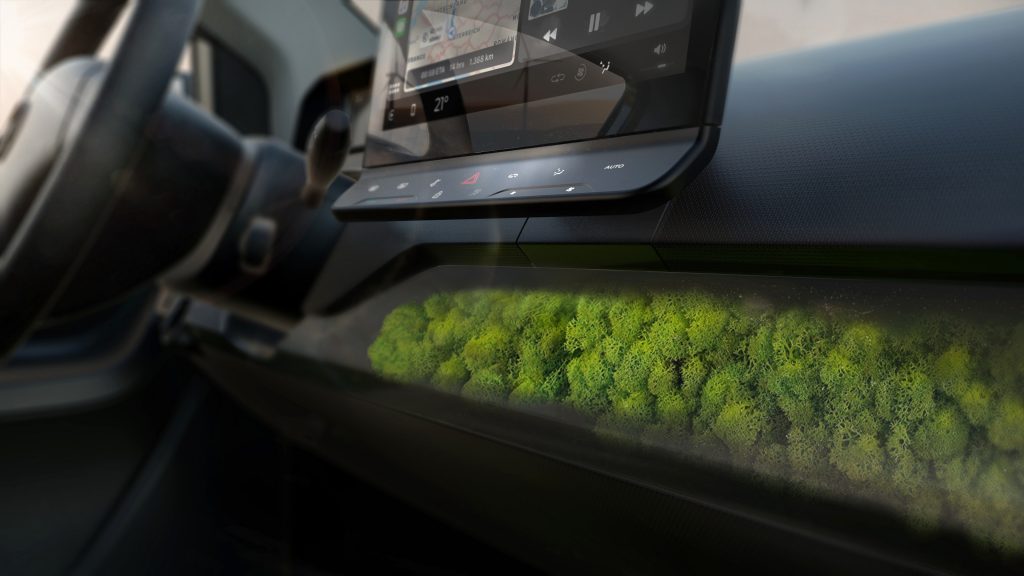 Certainly a very interesting concept and we wonder if other “green cars” will adopt similar features.

Aside from the moss in the dashboard which will probably grab everyone’s attention first, the rest of the interior is minimalist.  All of your controls will be available via a 10-inch display in the middle of the dashboard with more pertinent information being displayed on a 7-inch screen within the gauge cluster. The spartan interior was a conscious decision by Sono, as Sono CTO Roberto Diesel puts it:

“The avoidance of redundant luxury in the interior equipment and the cost savings through sharing favor the willingness to share the Sion. Thus the vehicle owners and sharing users actively contribute to the improvement of our climate.”

The Sono Sion will look to start production in the second half of 2020 in conjunction with NEVS in Trollhättan, Sweden. Sono is prepared to produce 260,000 vehicles, all of which will be produced with 100% of the energy being derived from renewable sources. The base price of the Sion is 16,000 euros with the battery available to either be purchased outright or leased. The cost of the battery is expected to be 9.500 euros, bringing the total price of the Sion to 25,500 euros. 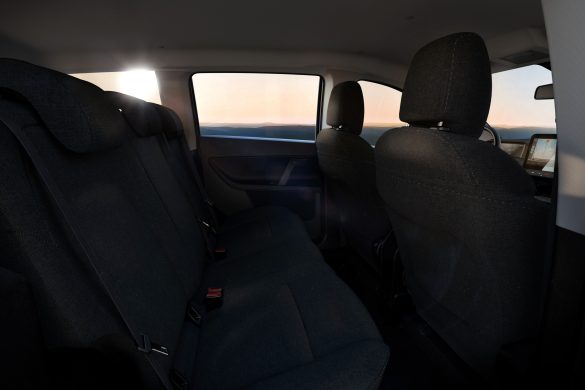 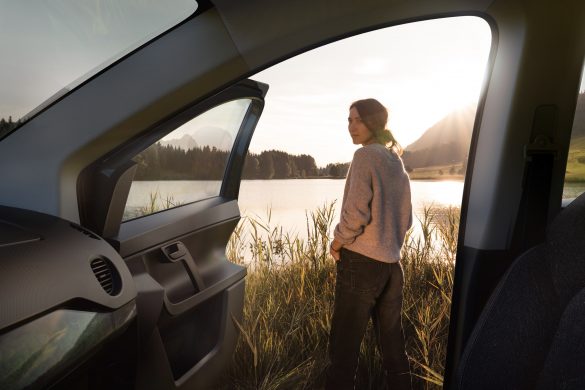 What do you guys think of the Sono Sion interior and of the car as a whole? Let us know down in the comments below.