The BYD Yuan EV360 will reportedly be getting an updated version in the near future. The new BYD electric car has since been named the Yuan EV500, and will allegedly be able to boost a range of nearly 500 km (roughly 310 miles).

Chinese automaker BYD has seen a lot of success with their current Yuan EV360 model which released back in May of this year. The automaker reportedly sold 21,490 units during the vehicle’s first five months on the market, with a record 5,803 units being sold in the month of October alone. By the end of October, over 4,000 orders were placed for the BYD electric car. 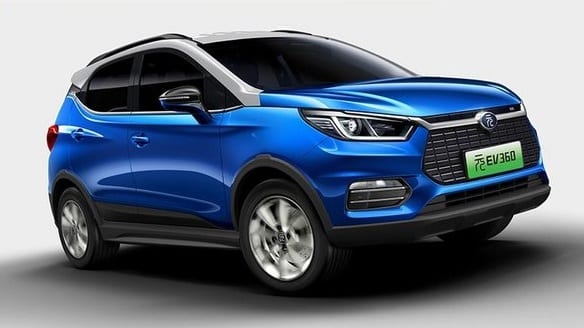 The upcoming BYD electric car, the Yuan EV500, has been estimated to have a staggering 500 km (310 mile) range. While information regarding the Yuan EV500’s specifications are scarce at the moment, we suspect that the new Yuan model will support its massive range by implementing a much larger battery.  According to a report from Gasgoo, the Yuan EV500 will sport a design that looks almost identical to the previous EV360 with a few minor variations.

“Retaining the exterior design of the existing model, the Yuan EV 500 still adopts the latest design language of the “Dragon Face”. At the front face, a chrome trim, with a logo of Chinese character “元” in the middle, runs through the intake grille and extends to both sides. Headlights embedded with L-shaped daytime running lights look rather exquisite. As to the bumper design, the smarter aerodynamics is used to create sporty atmosphere.”

The new BYD electric car is also said to feature an upgraded motor output of 120kW thanks to the inclusion of a permanent magnet synchronous generator, a massive improvement when compared to the 70kW output of the previous Yuan model.

A release window for the Yuan EV500 has yet to be announced at this time, and there has been no word on whether or not the vehicle will be sold internationally.