The first of VW’s MEB based electric cars will be built in Zwickau, Germany. However,  VW plans for this new factory being built in Anting, Shanghai to be its first factory to be built from the ground up for electric vehicles.

Earlier yesterday, members from both VW and SAIC attending a ground breaking ceremony for their EV factory.

Dr. Herbert Diess, CEO Volkswagen Group considered it an important milestone for the company and said:

“By building the first factory specifically designed for MEB production, we are opening a new chapter for the Chinese car industry together with our joint venture partner SAIC VOLKSWAGEN. We are strengthening our activities in China’s fast growing e-mobility market.”

As stated previously, the MEB platform will first be produced in Germany first. As far as the plans for this factory go, it will start production in 2020 and “will produce various new pure electric vehicles of SAIC VOLKSWAGEN, including medium- and large-sized pure electric SUVs, as well as battery systems”. The first vehicle will be an MEB-based SUV. Possibly the I.D. Crozz?

VW is also happy to tout their high-tech “industry 4.0” features that will be inside the new facility:

SAIC VOLKSWAGEN’s new factory, located in Anting, Shanghai, adopts a production network based on Industry 4.0 and increases automation rates and efficiency. The facility comes equipped with over 1400 Industry 4.0 standard robots, as well as a range of technologies including AI, AR and VR, delivering an intelligent and digitalized production plant. Covering 610,000 square meters, the plant for new energy vehicles (NEV) includes a variety of different function areas such as pressing equipment and battery assembly workshops, in addition to an elevated stereoscopicwarehouse, a proving road and more. Meanwhile, it utilizes 27 types of environmentally-friendly technologies with a special focus on water preservation, energy saving and the reduction of carbon dioxide. 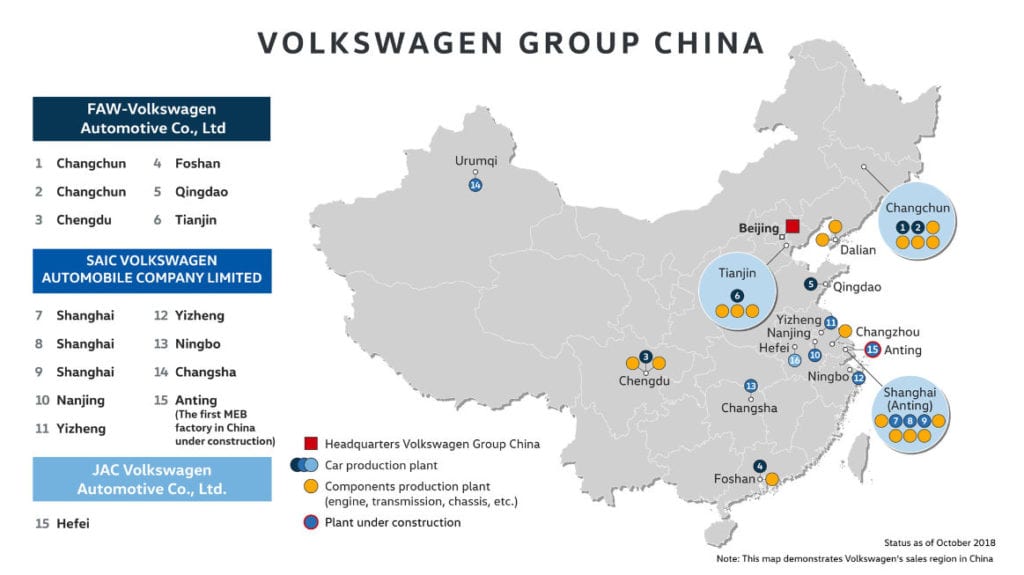 This may be one of 16 factories that VW has in China, but it might be the most important. We all know the pressure that China is putting on automakers to produce zero emissions vehicles. This factory makes it easier for VW to reach one of the most EV-hungry markets in the world.

This factory is very important in its Roadmap E plan. The plan calls for “By 2025, 50 purely electric vehicles will be on the market worldwide, with one in four new vehicles to be powered by electricity only”. Certainly a factory that can produce 300,000 MEB-based vehicles will help achieve this goal.

Volkswagen’s stance on EVs has been weird for the past week. On one hand, they have very aggressive EV plans like this, and are putting money into expanding infrastructure. On the other hand, just last the week the CEO spoke out against tighten EU emission regulations. And yes, its easy to label comments like his as being “anti-EV” and “anti-environment” as a knee-jerk reaction. Perhaps his comments are due to his concern for the health of the auto-industry and he doesn’t hate the environment. Who knows honestly?  Maybe this is all for show and VW is going through the motions. VW seems to be doing all the prep work, but the real commitment will be shown in the actual numbers of EVs built.

What do you guys think? Let u know down in the comments below.

Skoda Vision E to Debut as a Coupe and an SUV