Mercedes-Benz has released an environmental report regarding its first electric car, the EQC. The report allows us to see the current sustainability levels that electric vehicles are at, particularly the EQC electric SUV. The analysis was performed by TÜV Süd, a German testing certification firm to help prevent some bias in the numbers.

Reports like this are important to keep fans of electric cars grounded as there is still a lot of CO2 being released during the lifecycle of an electric car, particularly during the production.

In the case of electric vehicles, and mainly owing to the complexity of battery production, approx. 51 percent of the entire lifecycle CO2 emissions occur during the production phase. Another 49 percent or so is accounted for in the operating phase, therefore it is decisive where the energy is sourced when using EU power both in the production and use phase.

Given that the production phase produces marginally more CO2 emissions than the operating phase of the vehicle (defined as 200,000 km or about 124,000 miles), Mercedes has made it a priority to procure CO2-neutral energy for production. They plan to achieve this by 2022, particularly through the use of wind farms.

In regards to decreasing the CO2 emissions during the operating phase of the vehicle, Mercedes says that recharging the battery through renewable means (energy obtained through wind farms, solar panels, etc.) drastically decreases the emissions over the entire lifespan of the vehicle.

At present, 16.4 tonnes of CO2 are emitted during its production. If its batteries are charged from the EU power mix, this adds a further 16 tonnes. All in all, the emitted quantity of CO2 is then 32.4 tonnes. However, if the power for recharging is obtained from renewable sources, only an additional 0.7 tonnes of CO2 is emitted over the lifecycle (car production, energy consumption in operation, end of life). The overall CO2 emissions are then 17.1 tonnes of CO2: by using clean energy to charge the batteries, the CO2 footprint of the EQC can be practically halved. 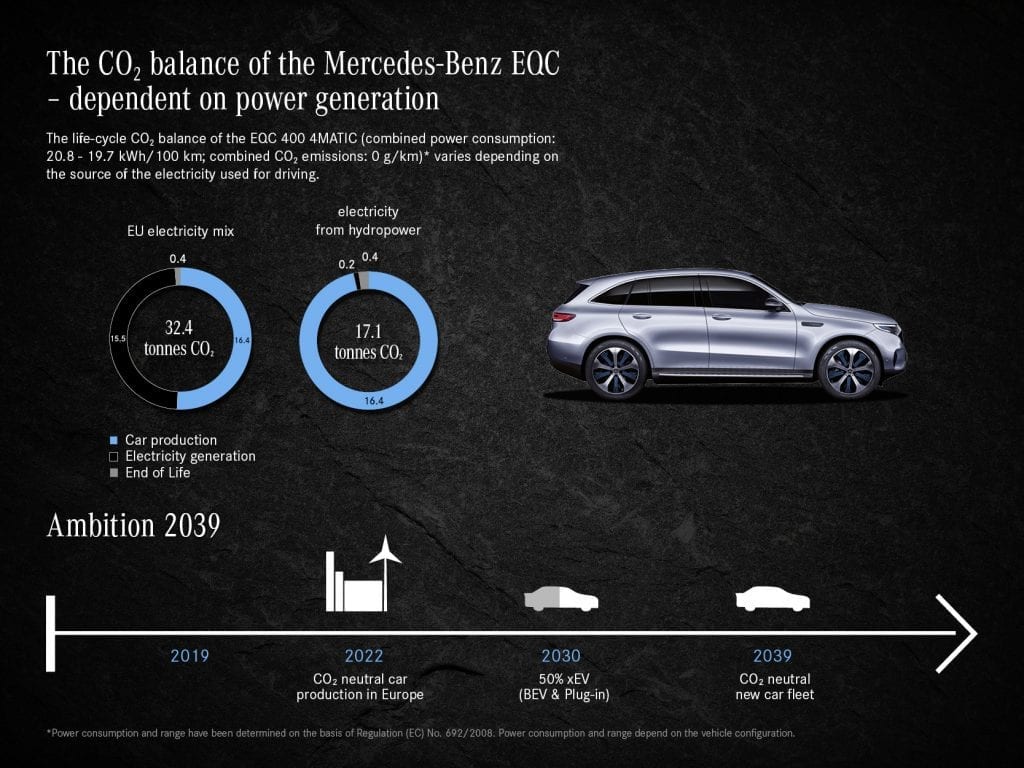 With that in mind, Mercedes states that the EQC’s CO2 emissions would be 70% less when compared to the emissions of a combustion engine vehicle.

Additionally, Mercedes is looking to decrease the overall amount of energy the EQC looks throughout its lifespan. They project a decrease from 722 to 478 gigajoule, a decrease of 34%. 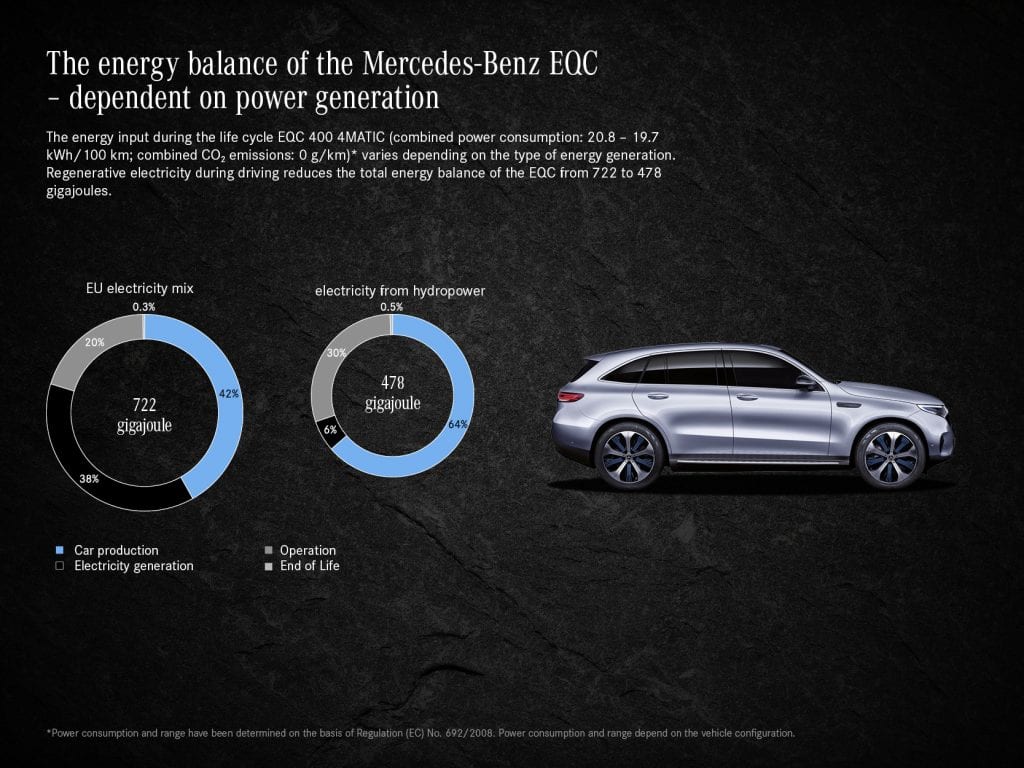 Apart from CO2 emissions, Mercedes is also looking to reduce the overall amount of materials being used on the vehicles. They plan to use materials such as recycled plastic and renewable raw materials such as hemp, kenaf, wool, and paper. Overall, Mercedes plans to “reduce the use of primary resources in the powertrain and battery technology by 40 percent by 2030”. 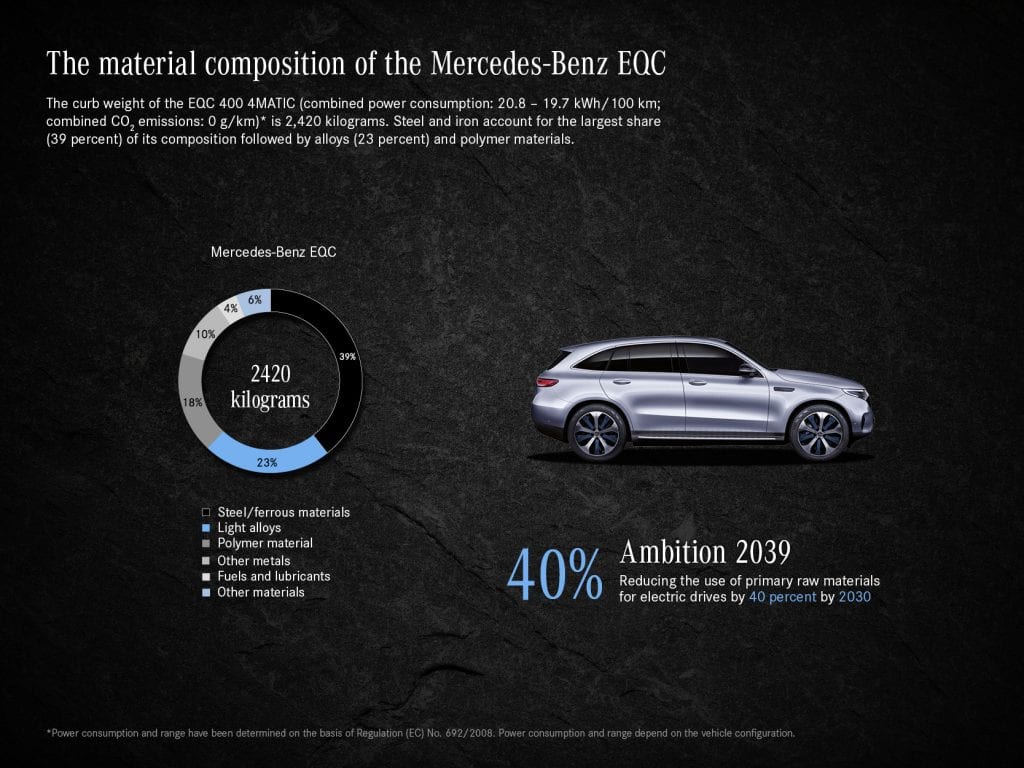 Lastly, the question of what to do with depleted batteries is always asked when talking about the future of electric cars. The most prominent options seem to be reusing batteries as stationary energy storage devices, but Mercedes has outlined other pathways for their electric car batteries.

Mercedes Benz intends to have a fully carbon-neutral fleet by 2039 and reports like these really highlight the importance of investing into renewable energy infrastructure. There is still a way to go before our vehicles can be fully carbon neutral.

We in the States will still have to wait until 2020 to get our hands on the EQC electric SUV, but the vehicle has already launched in Europe.

What do you guys think of the report and the EQC electric SUV? Let us know down in the comments below.