Lucid Motors continues to impress us as they drip-feed more information regarding their upcoming luxury electric car, the Lucid Air, which is looking to become the most serious competitor to the Tesla Model S thus far. This week Lucid gave us a look at the size of the battery that would be powering their 517-mile car, and it’s pretty unexpected.

When Lucid dropped the bombshell that their upcoming Air would achieve 517 miles of range and blow past the current range leader, the Tesla Model S, many had started to question what the size of the battery would be. Sure 517 miles of range is impressive, but if it took shoving 200 kWh of battery in there then you have sacrificed on cost, weight, and space. While the range would still be impressive, it wouldn’t have come due to improvements made to battery or powertrain technology, rather just added cost.

Instead, they developed a 113kWh with 517 miles of range.

Lucid seems to have some major strides during the development of the Air, and didn’t simply decide to shove as many batteries as possible into the car, something that CEO and CTO Peter Rawlinson calls “dumb range”.

“By pursuing this ‘smart range’ approach, Lucid shall not only be able to offer the Air with this unprecedented absolute range, but also offer future models that achieve competitive range from proportionately smaller battery packs, thereby saving cost, weight, and space. Lucid’s breakthrough is not merely just a few percent; we are talking about a significant improvement, which I shall cover further on September 9th. This represents a true breakthrough and what excites me the most for the future and for Lucid’s role in advancing electrification and sustainable mobility,”

With only 13% more battery than what is offered in the Model S, Lucid is promising a 28% higher range. Lucid has chosen LG as their battery supplier, so unless LG made some sort of leap in energy densities in the past few months, a lot of this efficiency can also be attributed to efficient motors and great aerodynamics.

Coinciding with the announcement of their battery size, Lucid had also decided to tout how much space the car has thanks to the (relatively) small battery, particularly the frunk which they claim is the largest of any production EV.

…with a capacity of over 280 liters, which is 89 percent larger than the current leader in the Lucid Air’s vehicle class and 40 percent larger than the current EV leader in the SUV class. In combination with its trunk, the Lucid Air offers a total of 739 liters of luggage space, best in class for both electric and internal combustion engine vehicles by some margin.

I’m pretty sure we all know who the current leader in the Air’s class is, so not only has the range crown been taken but so too has the frunk space crown. If you have an absolute need for having as much space as possible in your next EV, then Lucid has got you covered. 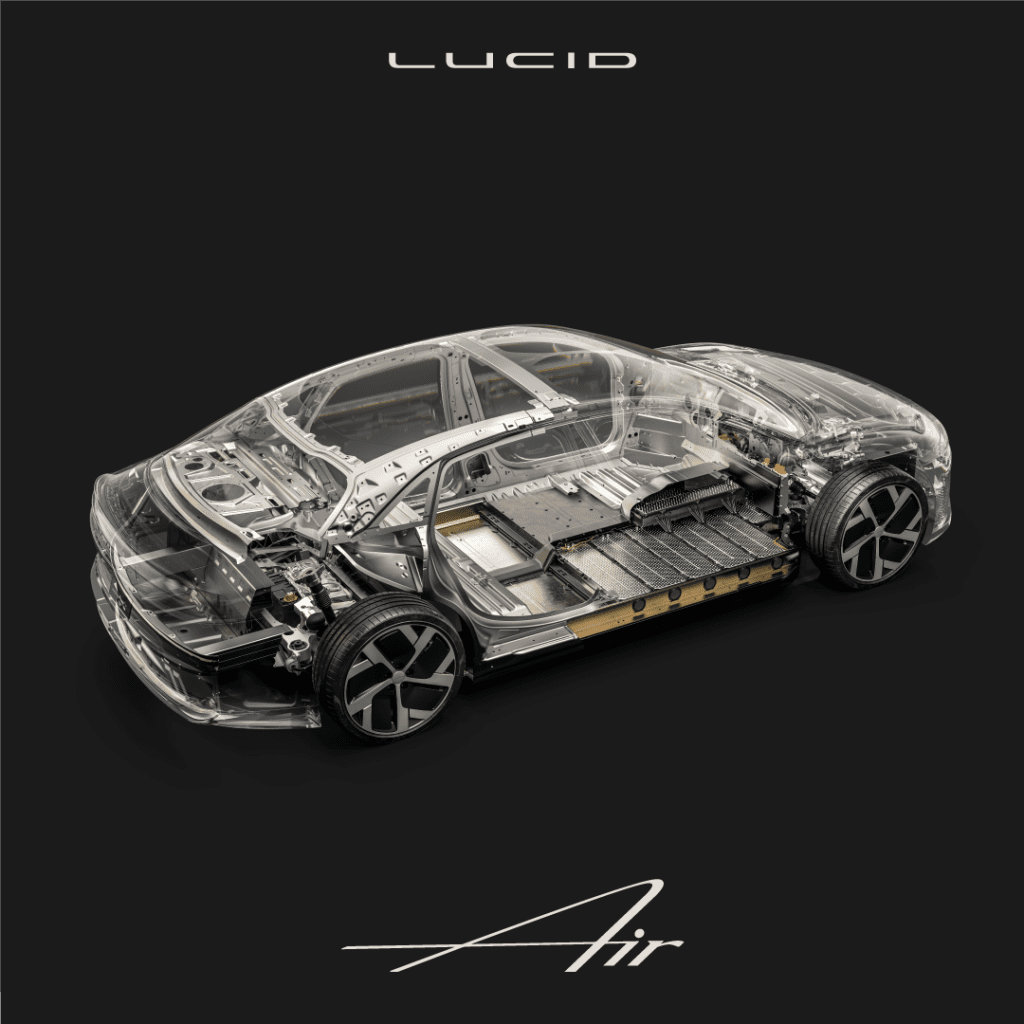 That brings us to the last number that is on everyone’s mind, the price. The assumption would be that the battery is much smaller, so the price of the Lucid Air should go down given the battery is one of the most expensive component within an electric car. But due to undefined territory, we’ll have to wait for an official number. We don’t know this new dense packs price per kWh nor its R&D expenses.

We still have to speculate that given how well equipped the Air looks, that the top-end model will still be considerably more expensive than the Tesla Model S. The Tesla Model S Performance begins just under $100,000 with the next car in line, the Porsche Taycan, starting significantly higher. Lucid has always had the intention of competing directly with Tesla so we imagine it will come close to the former, or the upcoming Model S Plaid.

However, what is more important for Lucid is what they can achieve with a low tier model. When the Air was first announced, Lucid had targeted a $60,000 price. With what we now know of the efficiency of the Air and it’s (hopeful) cost savings by being able to use smaller batteries, it would be possible for a $60,000-$70,000 Air with a smaller battery to still deliver a highly competitive range in the mid-300 miles, becoming not only a cheaper alternative to the Model S, but also a possible attainable upgrade from the Model 3/Y.

Tesla still holds a lot of attention with their full self-driving suite which will hold an advantage to what Lucid can deliver out the gates, but Lucid also plans to progress their own autonomy system, so who knows how long that advantage will hold.

Many will point to Tesla’s upcoming Battery Day as a chance for Tesla to stifle any momentum that Lucid is building. And people could be right, Elon Musk could come on stage next month and reveal a 1,000-mile battery or something else ridiculous. Tesla has constantly been innovating and having a viable competitor will only just make them try harder. Also while Lucid is not some sort of far-flung concept car to be made in three years, production of Air is expected in early 2021, the car has still not been mass-produced and there are still possibilities that issues will arise and maybe the Air will be too good to be true.

But as of right now, with all the information as we have in this present moment, the Air looks to be the toughest competitor the Model S has seen in its entire eight years of existence, and we should be happy that there is finally some competition building.

What do you guys think of the news? Is the Lucid Air deserving of the hype? Let us know down in the comments below.

Lucid Air to Be Fully Revealed on September 9th