Not even a month following the reveal of the Porsche Taycan, legendary auto tuning company Hennessey has chosen the Taycan as their entrance into the EV modification scene.

A big part of car culture is being able to modify your car to your heart’s desire. Whether you stick to strictly cosmetic modifications or completely swap out your engine for a different one, there is always a way to make your car yours. Given the abundance of different parts found within an internal combustion engine, there was always a lot of room for performance modification (turbos, exhausts, boring cylinders, etc.).

Given the simplicity in terms of how much less parts there are in an electric powertrain compared to a gasoline powertrain, there is much less room for motor modifications. While anyone even slightly interested in cars would be able to purchase a turbo and learn how to install it, being able to mess with battery cells is a whole ‘other ball game. 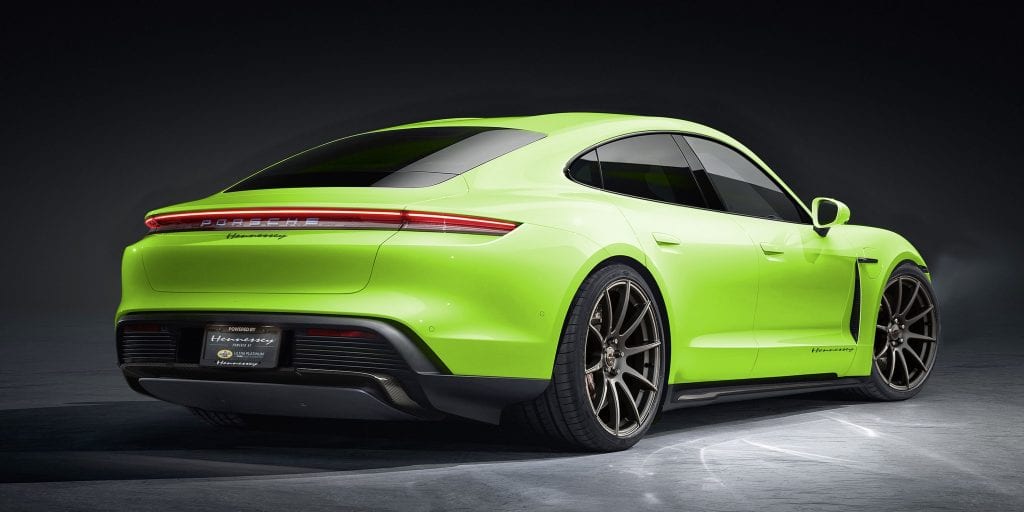 Thankfully, legendary tuning company Hennessey has taken an interest in trying their hand at EVs and may eventually lead to more opportunities in EV modifications. For those that are unfamiliar, Hennessey was founded in 1991 by John Hennessey and specializes in making “fast cars faster”. Their most notable car is the Venom GT which is based on the Lotus Elise and was able to reach a top speed on 270.49 mph. It’s the successor, the Venom F5, is expected to come out this year and is gunning to hit a top speed of 301 mph.

With all the being said, Hennessey is now looking into dipping its toes into the EV modification world with the Porsche Taycan. In the press release, John Hennessey stated that:

“We’ve been planning to do something with electrified vehicles for a while now. We felt that the new Porsche Taycan was the right platform from which to modify our first EV. Initially, we will start with simple modifications such as wheels, tires and interior upgrades as well as exterior modifications such as more aggressive front and rear bumpers. After that we will see what might be possible in terms of adding more power.”

Unfortunately, the initial modifications will be entirely cosmetic, but the company will look to see how much is possible regarding getting more power out of the vehicle. My guess is that we will have to wait a substantial time to see any sort of physical alterations that might increase power. For the time being, I believe the messing around with software and allowing the motors to use more power (at the cost of range) will be the only way we will see performance increases for the time being.

We will continue to keep a close eye on the project next year to see what kind of tinkering can be done with the Taycan.

What do you guys think? Will we ever be able to see as much powertrain modifications on EVs as we did on gasoline cars? Let us know down in the comments below.