In an effort to combat the deterioration of our air quality, many are swapping to all-electric cars. Overall, they’re better cars offering everything from technology to better performance at the next level. Electric vehicles are growing on consumers as sales continue at a rapid inline. We are even starting to now see some electric police cars.

What we tend to ignore are other industries and how they’re transitioning towards sustainable vehicles. We read about commercial trucks and private transportation going electric all the time but what about law enforcement?

Our #FremontPDTesla is now officially deployed for service. The EV rolled out our front gate shortly after swing shift briefing and has already responded to a couple calls for service this afternoon.

One Police department in Fremont, CA, has decided to begin their shift to all-electric early. They purchased a 2014 Tesla Model S 85 well over a year ago and began the conversion process. With a full list of required modifications, this Tesla is officially an electric police car for the Fremont PD.

The police department paid $61,478.50 to buy the electric car directly from Tesla’s CPO program in order to replace a 2007 Dodge Charger. The city of Fremont actually requested that the department look into an all-electric vehicle and Tesla, at the time, was the only one who could fit their requirements.

“The Tesla is the only electric vehicle that met specifications for size, performance, battery range, and safety, all required for a fully deployable patrol vehicle. Tesla electric vehicles are manufactured locally in Fremont.”

With the conversion included, the out the door cost on this electric police car would be around $100,000. It is a bit high for a police car, but the Fremont PD looked at it from a gas savings perspective. They estimated “approximately $35,000 in gas savings and an estimated $15,000 in maintenance” over the lifespan of the vehicle. The Tesla will be partially charged through solar panels adding to the savings. Tesla also prides themselves in having a lower maintenance cost compared with the traditional ICE.

“The electric patrol vehicle pilot program is an extension of the City’s clean technology and smart city initiatives to help make Fremont a more sustainable community. Given that Fremont Police vehicle fleet is responsible for a total of 980 metric tons of carbon dioxide emissions annually, this program has the potential to eliminate 10 percent of all municipal greenhouse gas emissions.”

Going electric this early in the technology does have some downsides, and the department acknowledges them. The Model S is a luxury vehicle, not one built for police use. The Tesla has limited space for police equipment and will require at least one hour of charging in between shifts. The pros should outweigh the cons but this is a trial after all. 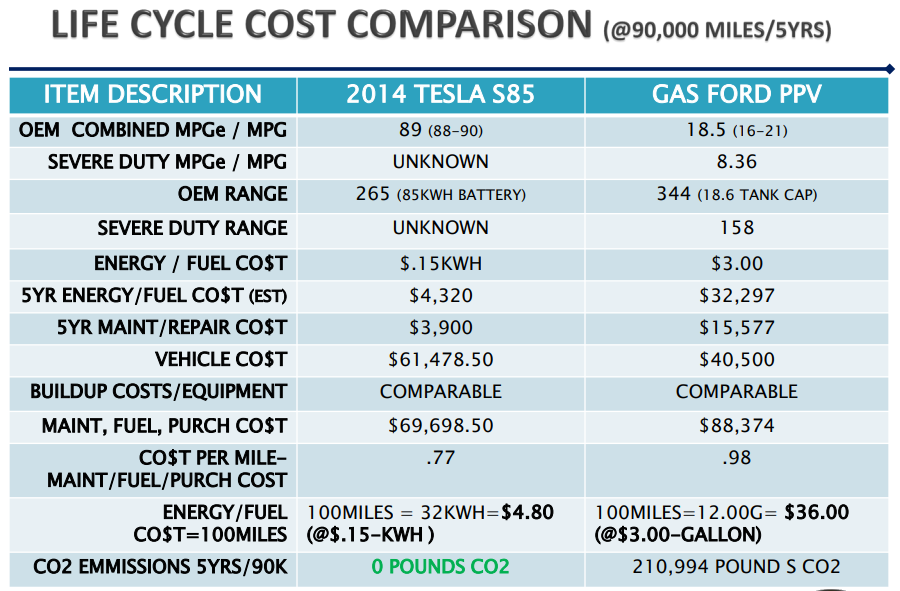 The Fremont PD is not the first to add electric police cars to their fleet. Many are used around the globe today. As EV sales continue to rise, so will the use of them in each and every industry, public or private. Some might not be aware that the first police car was actually already electric.

Tesla Gigafactory 4 to Be Somewhere in the ‘Berlin Area’

How to Use Tesla Full Self-Driving Without Crashing