In general, one of the first questions asked by someone inquiring about an electric vehicle is, “how long does it take to charge a Tesla car?” Range anxiety is one of the largest concerns when it comes to transitioning towards an electric vehicle. While other electric car manufacturers are trying their hardest to resolve these concerns, Tesla has held a competitive advantage in the case of charging and range for nearly a decade.

How Do You Charge A Tesla?

Charging a Tesla is just like charging your iPhone. You plug it in, leave it alone, and do not ask questions. Many would like to imagine it’s more complicated than that, but it doesn’t have to be. There are more details for the technologically savvy, but the consensus is that the typical consumer simply does not care. Do you know your iPhone’s charge rate and power consumption? As long as it’s fast, convenient, and easy, it really should not matter to you. We will go into detail regardless, but if you are seriously considering an electric car and these numbers scare you, just know the car goes fast, drives far, and charges quickly. The time to charge a Tesla is minuscule and irrelevant to most as you’ll wake up every morning with a full “tank” but I digress.

Where Do You Charge A Tesla?

You can charge a Tesla right at home. This is the easiest and most used scenario. While we have gotten in the habit of having to visit some sort of “convenience” station to fill up our cars, with electric cars you can charge from the comfort of your own home. I have to say, I don’t think there’s anything more convenient than charging a Tesla as you sleep. Tesla charging at home will however differ in the sense of speed but we’ll get to that.

If you are on a trip, Tesla also provides their own network of chargers, the Supercharger Network. A vast group of hotels and general destinations have installed Tesla destination chargers or just “Tesla chargers”, for simplicity. With an adapter, available from Tesla, you can also use most 3rd party charging networks as well. Tesla Supercharging is however the fastest of the bunch.

How Long Does It Take To Charge A Tesla At Home?

In most cases, the Tesla charge time is irrelevant as the car will reach optimal battery life over night. The speed at which your Tesla will charge at home will be dependent on your outlet. For the bulk of owners, installing an outlet outside or in your garage is the first step in buying a Tesla or electric car in general. When speaking with an electrician, let them know that Tesla recommends a NEMA 14-50. That is a 240V outlet on a 50 AMP circuit breaker. This will leave a Tesla Model 3 charge time of 30 miles per hour. If you already have a 240V plug installed nearby, Tesla sells adapters for the majority of outlets.

Tesla charging at home is self explanatory but the less known, fastest method, is by using a Tesla Wall Connector. This is a hardwired Tesla charger capable of speeds up to 44 miles per hour depending on the vehicle and amperage. This is not necessary, as the difference in the Tesla charging speed is almost unrecognizable as you will have a full charge by the time you wake up the next morning regardless. For the most part, this is just used for aesthetics. 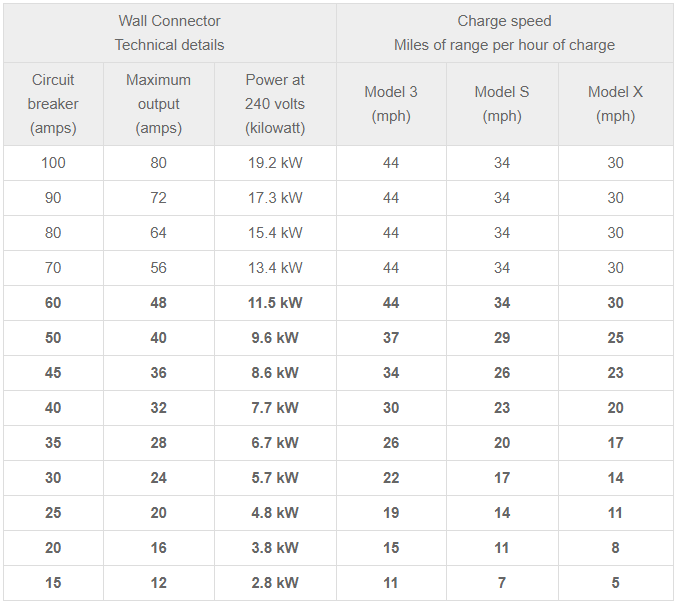 Albeit a bit redundant, if you are ever in a jam, your Tesla comes with an adapter for a standard 110V outlet. The same one your phone uses. Charging through one of these is extremely slow as they simply do not provide enough power. Tesla 110v charging time can be as low as 3 miles of charge per hour. Charge loss is a factor in all of your charging options but if you are just plugging in nightly, this is the only one you would personally see affected.

How Long Does it Take to Supercharge a Tesla

For those that do not know, Tesla has their own charging network dubbed the Tesla Supercharger Network. With over 1,600 Tesla charging stations, it stretches the entirety of the United States as well as other countries around the globe. You can travel just about anywhere with a Tesla at ease. This is a bit different from charging a Tesla at home as its super quick. 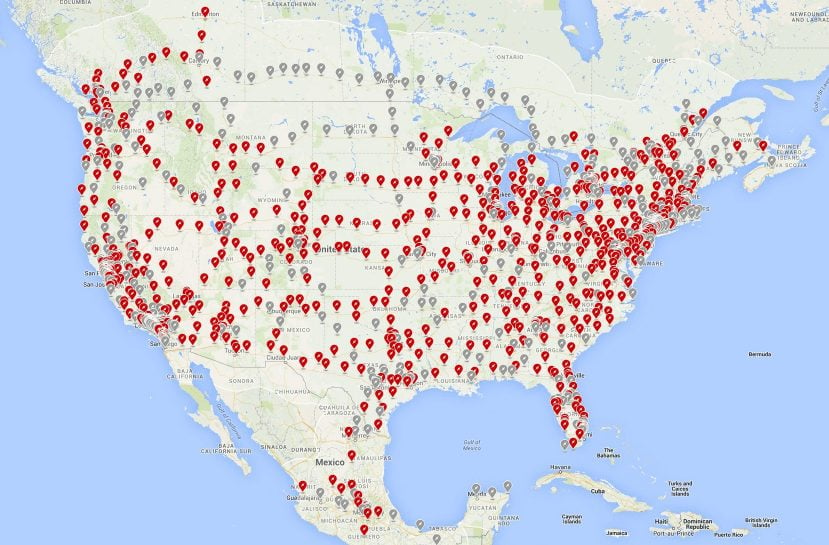 Tesla Supercharger times are dependent on a few factors. In general, you can expect an 80% charge in approximately 30 minutes. If someone is parked next to you, this time is doubled as they will share your same circuit. These Superchargers charge at a 120 kW rate and are sprinkled alongside highways.

The company’s solution to city charging is their Tesla Urban Supercharger. These are slightly smaller and charge at a 72 kW rate. These chargers are not split if someone is beside you and results in an approximately 45 minute charge time.

More recently, Tesla announced an upgrade to their Supercharger Network, Supercharger V3. This upgraded version charges at a 250 kW rate with no charge splitting. All Model 3’s can fully take advantage of these charge speeds but the new Raven motor equipped Model S/X can only reach a charge rate of 200 kW. In short, the Tesla Model S charge time is lower than that of the Tesla Model 3. Supercharger V3 is beginning to roll out and will replace all current Superchargers, eventually. With this new Tesla charger, a Tesla Model 3 charge time is lowered to 5 minutes for an astonishing 75 miles of range. 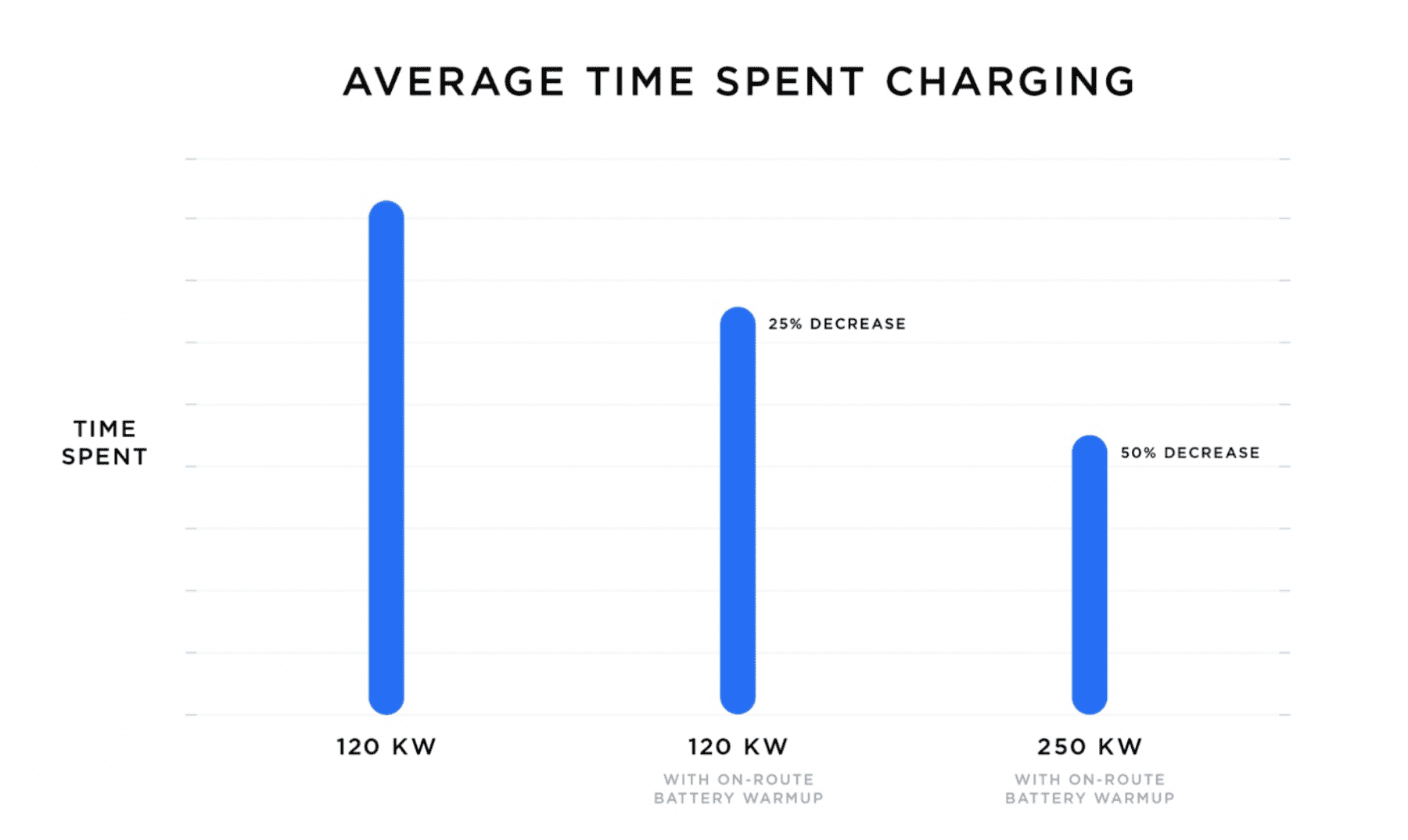 With this upgrade, Tesla also released an update to all of their vehicles which will, in simple terms, prepare your car for charging. When you have your destination set in your car, the “On-Route Battery Warm-Up” feature will start to heat up to be at the optimum temperature for the peak charging rate. Tesla states that this will decrease charging times by 25% for all cars with a 50% decrease for V3 compatible charging.

Traveling with a Tesla is not a guessing game. Although there are online route planners, they are not necessary. Your Tesla’s built-in navigation is aware of your battery life and will route you towards chargers automatically when needed. In most areas, there is no lack of Superchargers and traveling great distances is never a worry. You can also always use a destination charger or a 3rd party charger instead of a Tesla Supercharger.

How Often Do You Have To Charge A Tesla?

For the majority, you will just plug your car in overnight daily. But the answer to this question is fully dependent on a few choices. In the United States, the average person only drives 37 miles a day. If you fit this or below, you might not want to go through the “hassle” of plugging your car in nightly. Some people who live in apartments or have no access to convenient charging will simply plug their cars elsewhere once a week or so.

How Much Does It Cost To Charge A Tesla

The overall agreement is that charging an electric car is less costly than filling up the average gas car, but just exactly how much does it cost to charge a Tesla? That will be highly dependent on your state and location as each has different pricing for electricity. The range is anywhere from 9.66 cents to 32.45 cents per kWh but the national average sits at 13.34 cents per kWh. Using this handy Tesla charging cost calculator you can get a pretty accurate estimate. Assuming a perfect charge efficiency, it would take $13.34 to charge a Tesla P100D to 315 miles of range. In comparison, a Mercedes S Class costs about $70 today to fill up its approximately 450-mile range. Obviously, numbers start to come closer as you compare hybrids to the standard range Model 3, but that’s no fun.

So how long does it take to charge a Tesla? Well, as you can see above, it depends. There are many factors such as where you’re choosing to charge and how much range you need. The question “how long does it take to fully charge a Tesla?” is misleading as you’ll never need a “full” charge. In reality, you’ll just need to gain back your daily usage which can take anywhere from minutes to overnight from within your own home. Overall, the time to charge a Tesla and Tesla charging speed is unnecessary knowledge unless on a lengthy road trip. If you happen to find yourself on one, no worries, Tesla charge locations are spread thick and conveniently placed with Supercharge times clocking in almost equivalent to the standard restroom stop.

Crowd Sourced Data Shows Cybertruck Reservations Are Over One Million

IONITY goal is to have 400 stations by 2020. Tesla currently has 1,636 stations. While it’s a good start, and commendable effort, CCS is still woefully behind.

Who would ever have the time to stop every 300 miles and charge for 75 minutes when on a long trip? If you can afford to buy 2 cars then you’d need on electric and one with a combustion engine..

That’s not very accurate. It would be extremely inefficient to charge for 75 minutes at a time due to the charge ramp. The first half of charging is basically twice as fast as the second half. You’re looking more at 30 minute stops. I just drove from NYC to Miami in an ICE. It took 23 hours on the road with gas and food stops. I estimate that same trip in a Tesla would have taken 24 hours on the road. Unless you’re eating gas station food, you’ll have to separate your gas and food stops. Meanwhile, Tesla Superchargers are conveniently located off highways next to food. You can also charge to full overnight at your hotel. according to Tesla’s online route planner, you’d have 7 stops plus the hotel charge. Where as in this ICE trip I just took, I stopped 5 times for gas and 3 times for food. So yea, a 1,300 mile trip might take 1 or 2 hours longer in a Tesla, but I would have also saved ~$200 in gas.

Tesla’s Superchargers are falling way behind the capabilities of the CCS world-wide charging standard which is used by practically every automaker except Tesla. They currently top the newest Supercharger by providing 350KW charging (Porsche Taycan) and also have upgraded their max to 450KW, almost twice as fast as the newest Superchargers, as demoed by BMW, et al. The Supercharger netwrok is being expanded at a snail’s pace – less than 10% promised by Tesla and at present one can only say that most Americans are within 150 miles(!!!!) of a Supercharger. Tesla is equipping their European Model 3 cars with adapters for CCS chargers but cannot charge any faster than 250KW.