The Lucid Air is unquestionably one of the electric cars that we are most looking forward to in the next year. The startup has been showing promising signs of delivering a highly competitive luxury EV that not only can match the Tesla Model S, but also outdo it in certain regards.

While deliveries are still months away with a target of Spring 2021, Lucid has already begun opening studios throughout the country and hopes to have 20 open by the end of next year. Last week the company opened one of these studies at Brickell City Centre, an outdoor Miami mall. While in the area, we were invited to stop by and see what it was all about.

The idea of relatively small showrooms over bustling traditional dealers is still in its infancy. While Tesla has shown new possibilities, not many others have joined them in revolutionizing the way we make first contact with new cars. A widespread standard of expectations has yet to be established, leaving any newcomers to put their own spin on what the future car buying experience should look like.

Peter Rawlinson, CEO and CTO of Lucid Motors described the purpose of the Lucid Studios as such:

“Just as the Lucid Air is meticulously designed and engineered to be a new benchmark in the luxury electric car segment, we designed Lucid Studios to be engaging, to start conversations and to help educate people about the performance and efficiency benchmarks possible in an electric vehicle. A Lucid Studio is a place for people to learn about our unique brand while supporting every facet of the customer journey.”

The Lucid Studio we went to is found in Brickell City Centre, a semi-outdoor high-end shopping center near downtown Miami. The retail space occupies a first-floor corner spot allowing for sightlines from the street along with high foot traffic with an Apple store being directly above it. The large windows attract any wandering eyes from patrons as both a Lucid Air and the exposed platform it rides on are prominently displayed. During our time at the Studio there was not a single person that didn’t walk by without an extended gaze inside.

Of course, it would be difficult to give my impressions of the studio without drawing comparisons to a standard Tesla store. From a strictly visual standpoint, the two are pretty different and will appeal to different eyes. Tesla has adopted a very minimalistic design to many of their cars, both inside and out, and this design philosophy extends to its stores. Tesla stores feature minimal fixtures, are bright white, and try to emulate a futuristic space interior. While many have taken a liking to this type of design, others might find it too spartan or sterile. 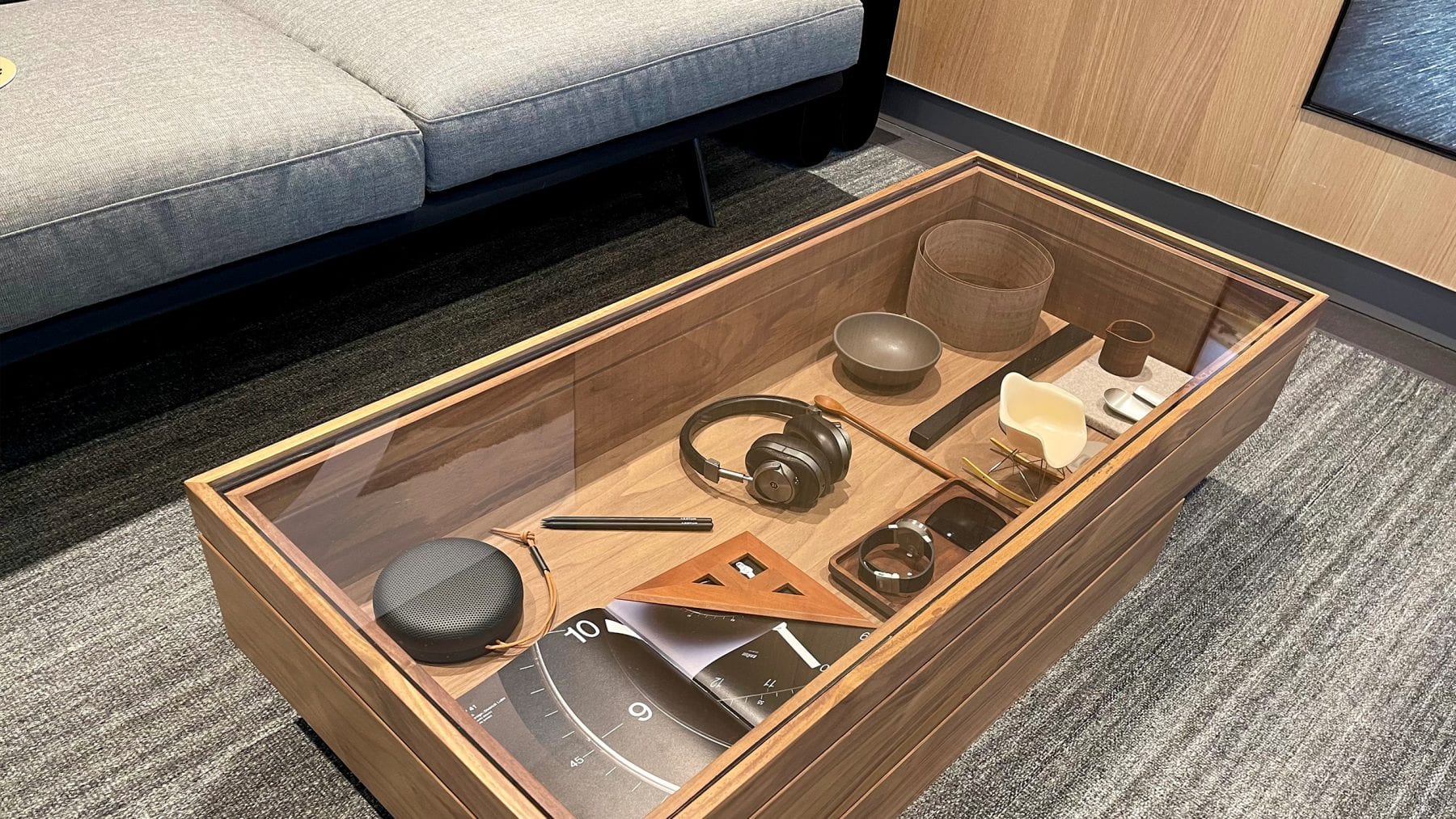 This contrasts with what I would call a high-end coffee shop vibe (minus the coffee smell) that the Lucid Studio has. Once again, this is not to say that one is better than the other, but Lucid is positioning itself as a luxury brand and the Studio interior fits the bill. A couple of comfy couches, attractive wood paneling, and soft lighting is a stark departure from your traditional showroom.

The Lucid Studio is loosely divided into three sections. One section has the Lucid Air (which we got to see for the first time in person), another with a section displaying the different interiors and paints configurations, complete with virtual reality (which we will get to later), and a section with the Lucid’s platform exposed and their battery technology on prominent display.

That last section fulfills two major purposes. The first is getting eyes into the store because I mean come on, how often do you see a car without its body? Its second purpose however might prove to be more valuable, and it has to do with consumer education, something our guide was persistent on expressing the importance of. As we know and continue to learn, the traditional dealership’s largest flaw in the transition towards EV customers is their lack of EV education and the staff’s aversiveness to learn. With Lucid, as far as we’ve been told, a primary focus is placed on keeping representatives up to date on their EV facts and comparisons. 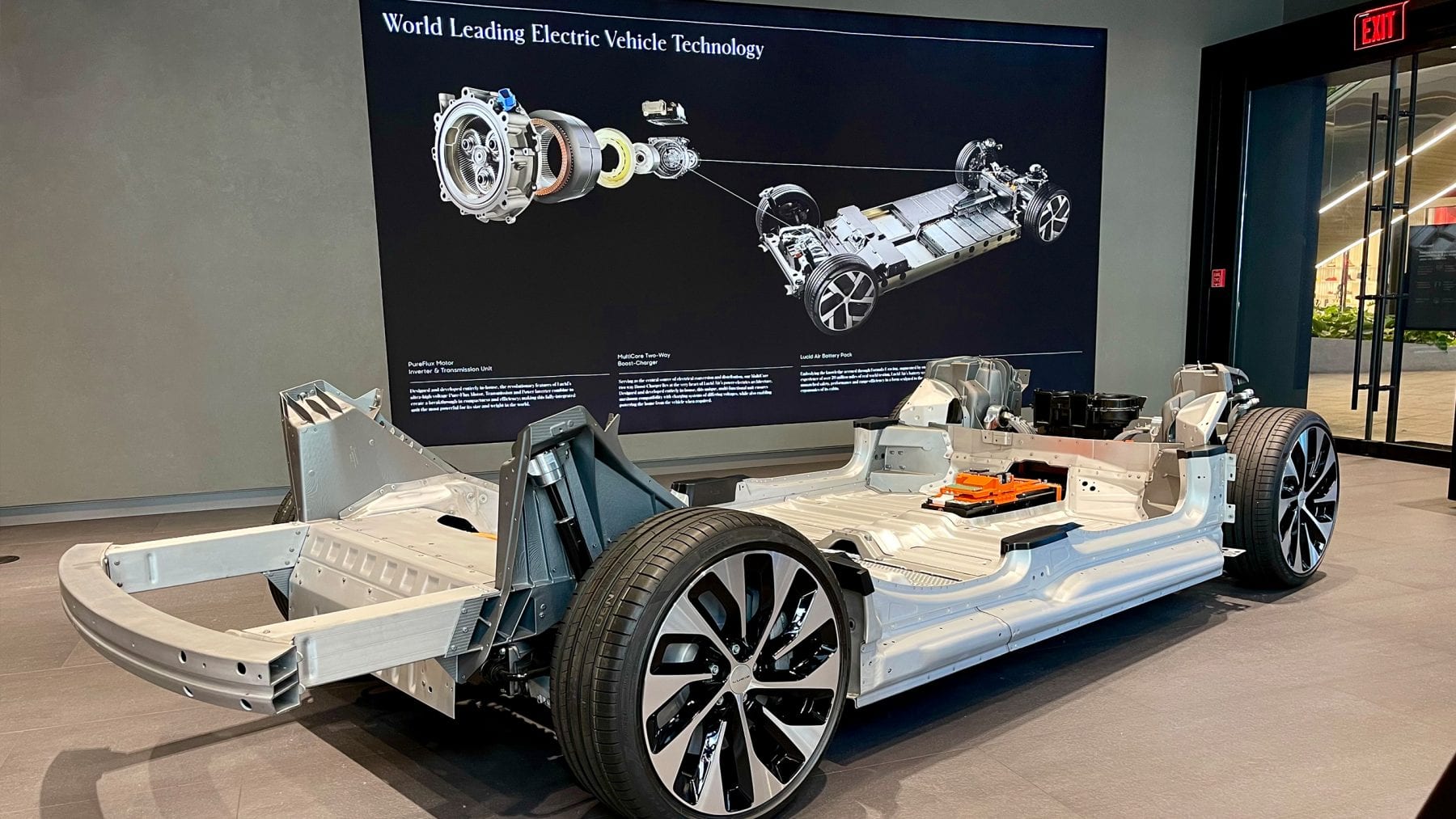 As we all know, no matter how good an electric car may be, it means nothing if the clientele is either misinformed or just generally unknowledgeable about electric cars. While being a nice centerpiece, the exposed platform along with standalone batteries and motors allow potential customers to gain a better grasp of how an electric car works and opens the door for further discussion. This benefit was echoed by our guide who talked about how the platform provided a nice visual aid for those that wanted to learn more about how an electric car works.

During our experience, we learned much about how Lucid handles the training for their sales associates in order for them to not only provide a luxurious experience but an educational one. Potential associates go through multiple rounds of interviews along with a few weeks of training to be able to convey any answers that a potential customer might be looking for. During this training, the associates are instructed to go into Tesla stores to see how their sales staff handle customers. They are also instructed to visit high-end retail stores such as Burberry or Gucci to have a better idea of what a luxury customer service should look like. We were unable to test the staff out ourselves but from what we were told, and the small interactions we caught the sales staff have with other customers while we were there, we are confident that Lucid will be able to handle even the most jaded anti-EV customer. 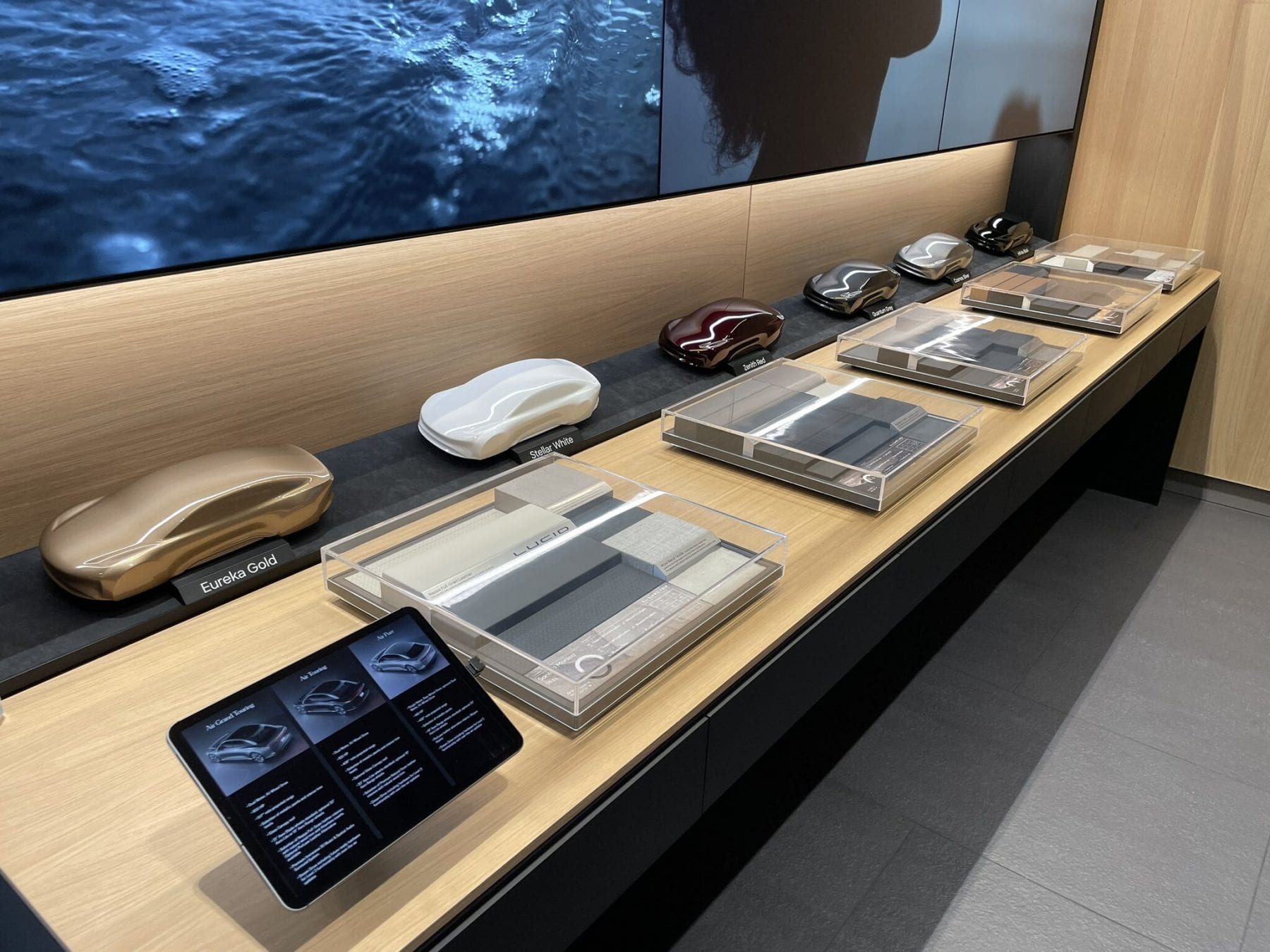 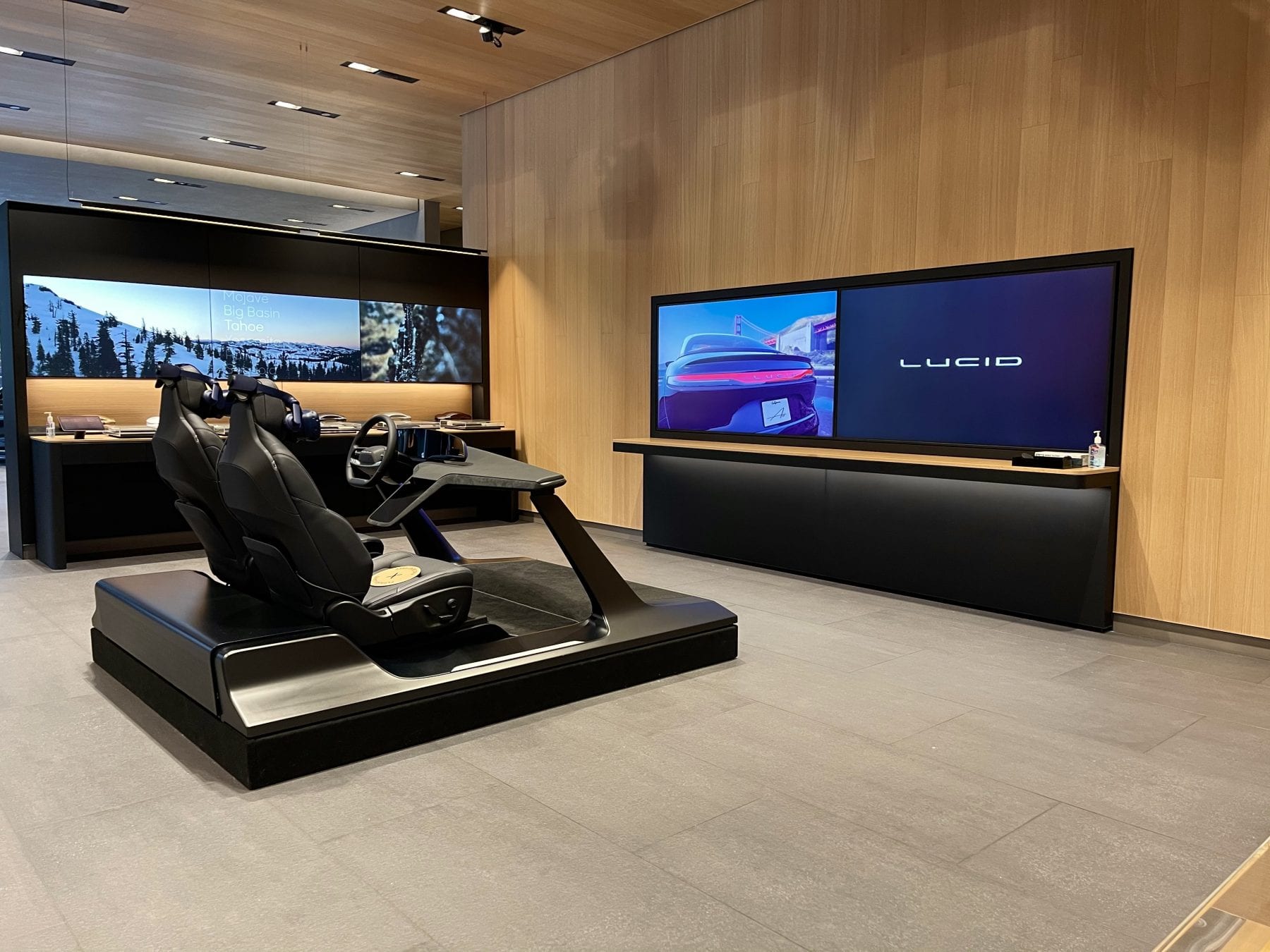 Our visit was capped off with a tour of the various interior and exterior options laid next to the Studio’s VR setup. The setup features a cut-out of the front seats and dashboard along with two HTC VIVEs. Since Lucid doesn’t have the ability to keep a 30 car inventory in the middle of downtown Miami, this was the next best thing in terms of presenting different car options to potential customers. You strap on the VR headset and a sales associate will go through different color combinations with you in different light settings so that you can see how the paint reacts in different environments. You are also free to sit in the virtual car to better decide on what interior color you want. Nothing will beat having the real car in front of you, but this is probably the best compromise at this point. If nothing else, this novel way of presenting your car configuration will probably aid in spreading Lucid through word of mouth as people describe themselves configuring a car in VR to their friends.

Lucid has seemingly been doing everything right so far and their sales experience doesn’t look like it will disappoint. All that’s left for them is to provide a product that will make good on all their questionably impressive promises. 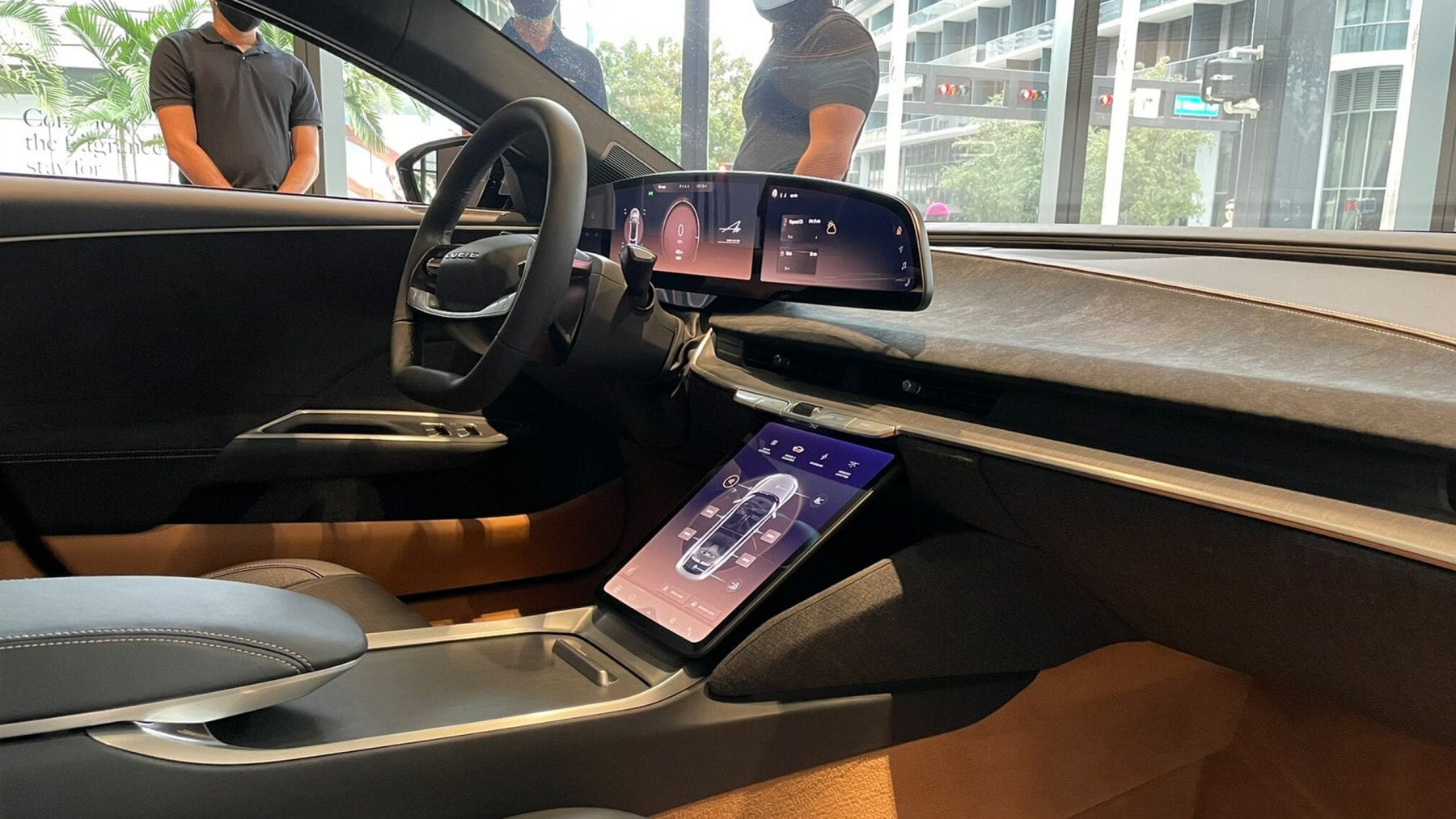 We must emphasize that our experience was unnatural and this is not an assessment of the buying process or sales staff EV knowledgebase. Previously we’ve put dealerships to the test but were unable to do so this time around with our arrival expected and prepared for. Instead, this is just an impression of the studio and sharing some of the insight that our guide, Guy, was able to give us. Hopefully, someday we will be able to go back in with fake mustaches and put the staff to a real test.

Buying a car might be one of the most unpleasant experiences imaginable. Fast-talking salespeople, price discrepancies, and hours of paperwork can drive basically anyone to wit’s end. But that was yesterday’s status quo. Now that we are seeing a fundamental shift in vehicle architecture it is as good a time as ever to modernize the car buying experience alongside it. We are seeing new routes be taken with almost every startup. Forgoing the traditional dealership route and going with small storefronts as Tesla has seems to be the preferred path for a direct sales model. While this is most likely primarily done to save on overhead costs, it also accomplishes a more personal and relaxed experience for the modern car buyer.

The Lucid experience is similar to Tesla with a luxury twist. The company seeks to embed themselves as a brand as much as an automaker. These showrooms are meant to act as an initial point of contact or visual aid, not much more. Locations will offer test drives but the entire ordering process will be done online. With smaller locations sitting on prime real estate, deliveries are a logistical nightmare. Instead, Lucid Motors will have other locations nearby dedicated to deliveries and possibly service as well.

I however am not oblivious to the fact that even in the traditional dealership model, the treatment is better the higher up the price bracket you go. You are allotted more attention at a Porsche dealer than you are at a Toyota or Kia dealership. The same can be said here with Lucid dominating the luxury feel. A lot of these other startups are positioning themselves as luxury brands as well, at least initially, so large volumes and thin margins aren’t there to pressure the sales team. But will all these niceties disappear when they begin to shift to sub-$30,000 cars and volume becomes the focus? Will this setup only work for luxury vehicles and brands? Tesla has shown that the setup works with sub-$40,000 models, but will it continue to work when they release their planned $25,000 car?

Regardless of this structure becoming the dominant car buying experience or not, in the next few decades we are going to see more of these auto showrooms pop up. It will be hard for legacy automakers to ignore this shift away from the traditional dealership network and will be interesting to see potential experiments from them done in the future. We’ve already seen legacy automakers cater to the new EV audience with an internet approach, are showrooms next?