Byton officially unveiled their M-Byte electric SUV. The M-Byte’s claim to fame is its absurdly large 48-inch screen that spans the entire width of the dashboard. Originally thought to be a feature that was just put in the concept version as a cool idea, Byton was steadfast in keeping the feature and has actually managed to fit it in the production version. However, that is not the only screen as there is a seven-inch screen placed within the actual steering wheel and an eight-inch tablet in the the center console that the passenger can use. It is truly amazing to see how much screen real estate is packed in this car. Moving on to its performance, there are two versions of the M-Byte, a single rear motor version making 268 hp with a 72 kWh battery giving a WLTP estimated range of 224 miles. The second is a two motor version making 402 hp and has a WLTP estimated range of 270 miles. The entry level version comes in at an attractive €45,000 (excluding VAT) ($50,000) with no word of the starting price of the top variant. Byton states that they currently have over 50,000 reservations for the M-Byte. They plan to start production in 2020 and deliver the cars to their Chinese customers in mid 2020 and anticipate entering both the European and American market in 2021.
Read More Via Byton

Another vehicle shown off during the Frankfurt Motor Show was the Hyundai 45 EV Concept. The 45 acts as an homage to Hyundai’s first car, the Pony, which was produced 45 years ago. The 45 also carries a double meaning as there are multiple 45 degree design lines on the car’s interior. Hyundai considers the 45 as a foreshadow towards “a new era of Hyundai’s automotive design focused on electrification, autonomous technologies and intelligent design”. SangYup Lee, Senior Vice President and the Head of Hyundai Design Center stated that:

“As an icon of Hyundai, the 45 clearly reveals how Hyundai heads towards the future through heritage. Through the 45 built upon our design language ‘Sensuous Sportiness’, Hyundai wants to present our vision on how we want to reshape people’s in-car lifestyle in the era of electrification and autonomous driving.”

The 45 mainly serves as an indication towards Hyundai’s future styling as there was no mention of a hypothetical powertrain for the EV concept. Of course anything based on the 45 will be toned down for production. But who knows, maybe we’ll see some 45 degree angles adorn future Hyundai EV models?
Read More Via Hyundai 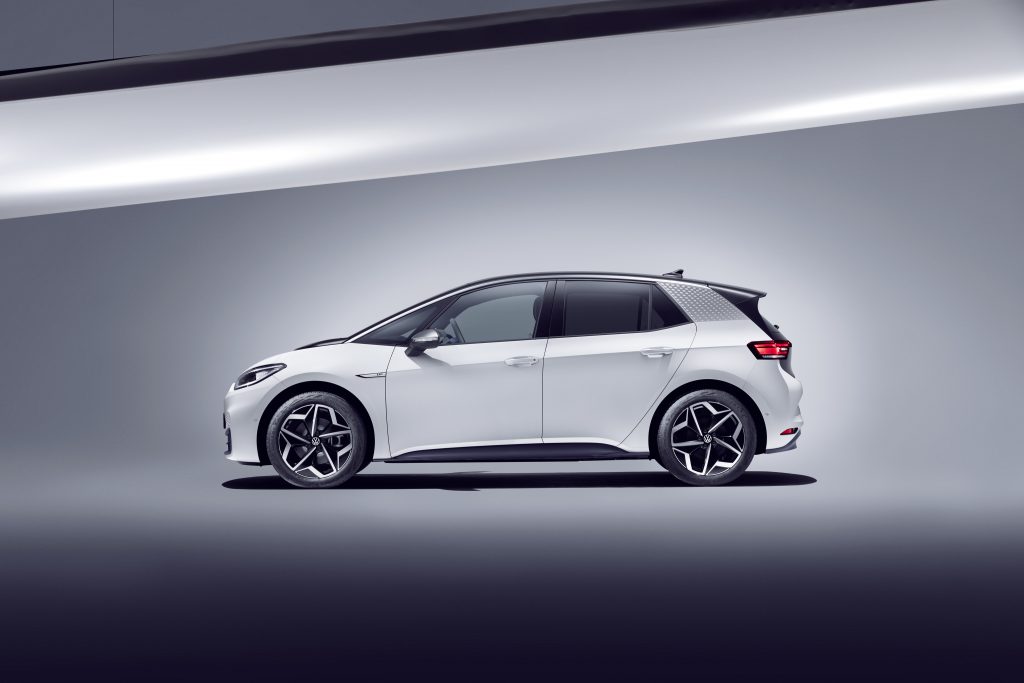 With the recent announcement of the Volkswagen ID.3, it’s only customary that we would ask if there will be a performance-oriented version of the electric hatchback. After all, Volkswagen does have an ‘R’ moniker that it sticks on its performance models. And while it makes sense the Volkswagen would be focusing on just delivering an electric car that would be loved by many, it has some long term plans to appeal those of us who crave fast 0-60 times and good driving dynamics. Jurgen Stackmann, VW’s head of sales, told Autocar:

“If there is a future for R it must be electric, it’s very simple. It won’t be next year, because we need to define what R is in the electric world.”
…
“We should be able to deliver something meaningful in under five years but it takes a team of developers, and it’s tough without a lot of expertise at the moment. We have to start that journey.”

Five years out is quite a long time that leaves a lot of room for changed plans, but Stackmann does state that the hypothetical R model would be all-wheel drive and have performance oriented e-motor. With technology moving at the pace that it currently is, there is no point in trying to predict what a 2024 ID.3 R would be like in terms of specifications. All we can do is wait and hope that an ‘R’ model becomes a reality.
Read More Via Autocar

About a year ago, Renault showed off the KZ-E an electric car that was emphasized for its affordability. With the announced specifications being fairly lackluster, we wondered how cheap the KZ-E could possibly be. Well it recently made its debut in China, and it is in fact, pretty cheap. The starting price of the KZ-E is only $8,684. Now while that is an absurd number for us living in America to think a new car could cost less than $10,000, there are a notable amount of gas-powered cars in China that are in this price bracket, so it will still have competition. With such a low price, the powertrain is nothing fantastic. There is a single front-mounted electric motor making a measly 44 hp that give the KZ-E a top speed of only 65 mph. A 26.8 kWh battery provides the electric crossover with an NEDC rated range of 168 miles, meaning the real world mileage will be somewhere in the low 100s. Even for such a low price, it does manage to fit in a decent sized screen in the center console for the infotainment system. While the KZ-E is far from exciting, it will definitely help with EV adoption by providing an option for those people that can’t afford the majority of electric cars out right now.
Read More Via Paultan