Chevrolet and GM still have a long road ahead of them to get 30 new EVs out globally by 2025 and today they added onto their electric family with the new 2022 Bolt EUV along with a refresh of the existing Chevy Bolt.

Even though the original Chevy Bolt has sold over 100,000 cars since its inception in 2017, there was certainly room to grow into other vehicle segments, particularly the crossover segment. While the regular Bolt might have flaunted its fifth door as evidence of a crossover heritage, it was definitely on the smaller side. In comes the Bolt EUV, which flings out the ‘S’ in SUV and replaces it with a shiny ‘E’, giving us the electric utility vehicle. The crossover market might be the most saturated of them all, but with the supreme popularity of the vehicle size, it is in every automaker’s interest to have some representation in the group.

With this addition in a popular segment, GM hopes to have more customers make their way towards Chevy electric cars as Steve Hill, vice president of Chevrolet stated:

“The new Bolt EUV is the best of the Bolt EV packaged in an SUV-like vehicle with more technology and features, giving customers more choices and reasons to switch to electric. This is an opportunity for Chevy to capitalize on the success we’ve built with the Bolt EV and bring new customers into the Chevy family.”

Of course, the regular Chevy Bolt also got a refresh for those that don’t need the extra space of the Bolt EUV.

So what has Chevrolet brought us with their new addition to their electric family?

While the Bolt EV and EUV share the same platform and look very similar to one another, Chevy states that the two cars do not share a single piece of sheet metal with each other. So how much of a size difference is there between the two on the exterior?

So we see that the Bolt EUV has about 3 inches longer wheelbase, 6 inches longer length, and essentially the same width and height. When looking at the numbers like this is interesting to see if the difference in size is actually noticeable in real life and why Chevy didn’t try to make the size gap a little higher in an effort to further distinguish the two vehicles. 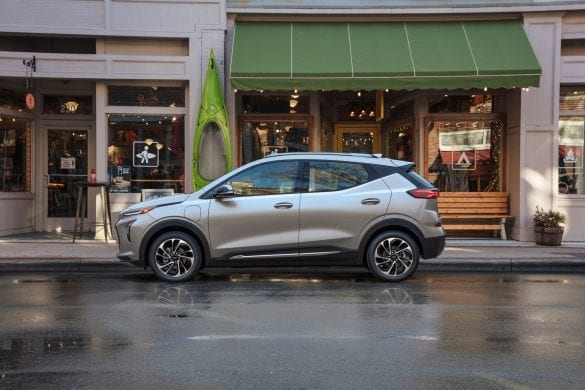 Given their similar size and shape it would be pretty difficult to differentiate the two at a quick glance.  Chevy has followed the industry trend of aggressively thin LED headlights and have incorporated them high up on both the Bolt EV and EUV with headlights underneath. The grille has also been updated from the current generation Bolt and also features more aggressive stylings. This new grille is actually one of the few exterior ways to tell the difference between the two as the EUV has a taller black trim on the lower part of the front. Other tells include chrome trim on the bottom of the doors on the EUV, taillights that make more of a ‘Y’ shape in their lighting, and a contrasting colored rear diffuser.  As you can see, the two are really similar to one another. 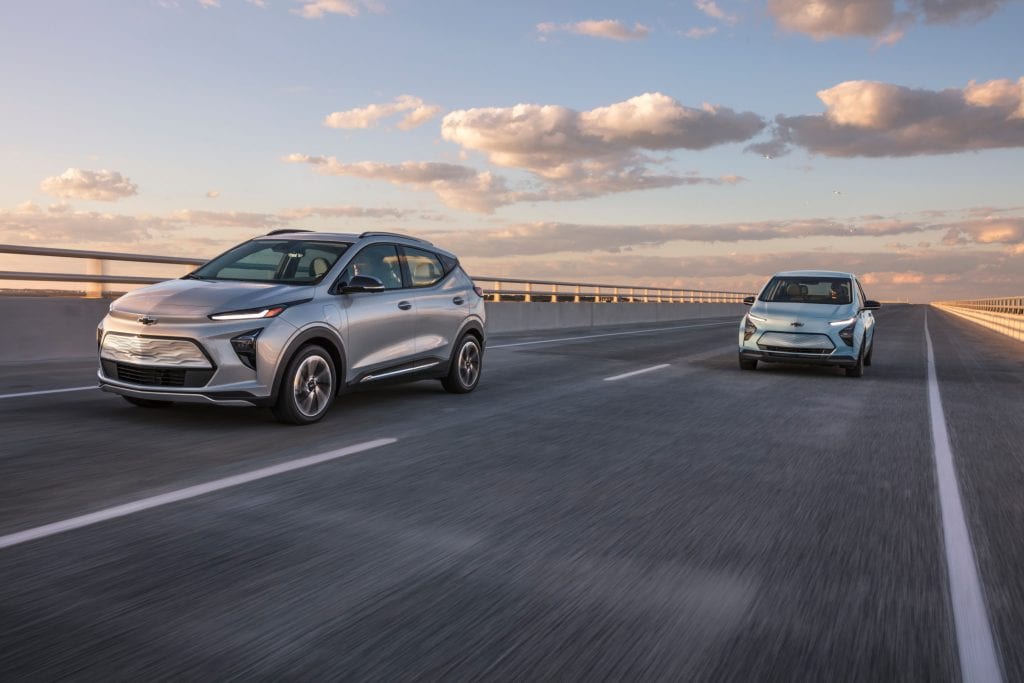 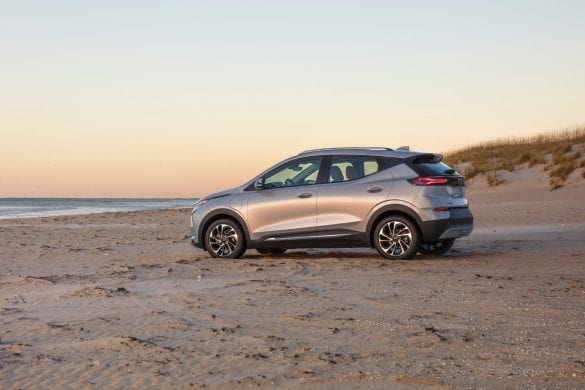 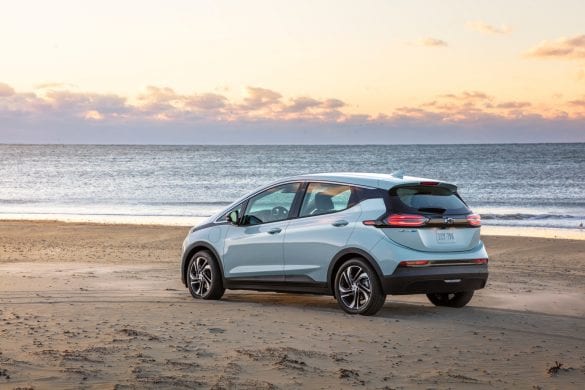 As with everything in design, not everything appeals to everyone. In terms of the exterior stylings, I am always a fan of more aggressive stylings, even if the Bolt is far from the fastest car on the streets. Long and thin strips of LEDs might eventually overstay their welcome and feel played out, but for the time being, I still enjoy seeing them. 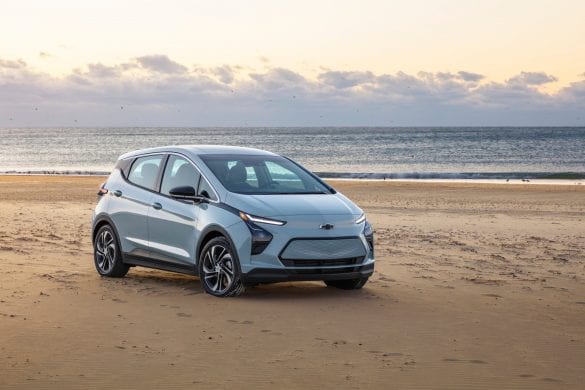 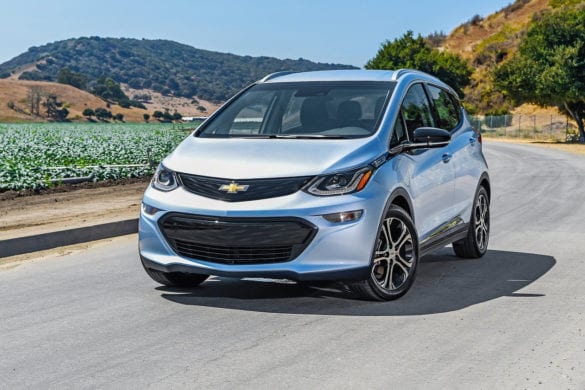 While the exterior did not share any sheet metal between the Bolt EV and EUV, the interior remains the same for both of the models. Starting from the screens, we have a 10.2-inch screen in the center console with an 8-inch display behind the steering wheel. 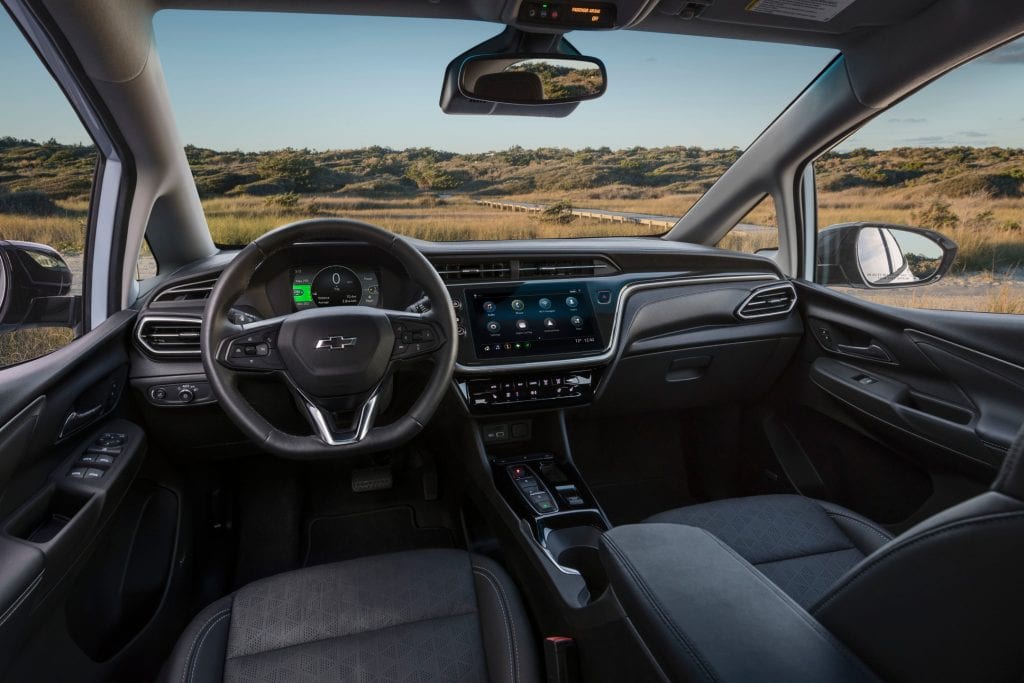 The interior overall looks like it has seen a significant upgrade to the materials from the current Bolt. We can’t tell for sure since we haven’t felt the car, but at the very least it looks like the seats of higher quality materials and more comfortable, addressing one of the complaints of the current Bolt. Additionally, Chevy has ditched the gear lever in favor of five buttons. Along with the usual PRND, the fifth button at the bottom of the line is a green button that enables the Bolt to be driven in one-pedal mode.

Overall the interior is a much-needed step up from the current interior and is probably the more important portion of this refresh compared to the exterior. 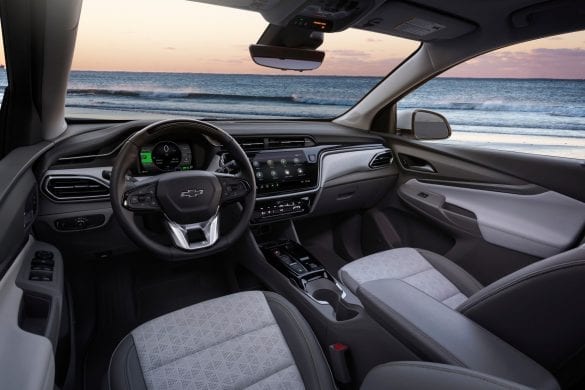 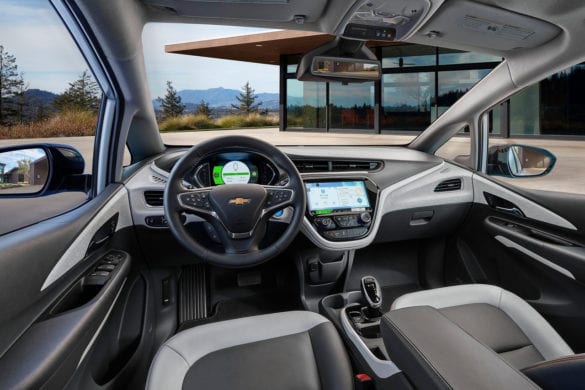 Is the EUV more spacious on the inside? Well only really in one aspect, and that’s the rear passenger legroom which sees a 3-inch increase from the EV. Headroom, shoulder room, and hip room are essentially the same across both models for the front and rear occupants. Even more interesting is that the cargo space does not see an increase in the EUV (and even sees a minuscule decrease according to the spec sheet). One of the biggest draws towards crossovers is their utility in having more space to haul things, but it seems that Chevy thinks the Bolt has an adequate amount of room.

As I’ve stated before, the Bolt is not the fastest car on the streets, but it doesn’t have to be. Neither the 2022 Bolt or Bolt EUV use GM’s newly announced Ultium batteries and instead build on the technology of the current Bolt. Both of the models use a 65 kWh battery with a single 200 horsepower (150 kW) and 266 lb-ft (360 Nm) motor. Due to the increased size of the EUV, its range will suffer slightly. Chevy estimates an EPA range of 259 miles for the Bolt and a 250-mile range for the EUV.

For some, this sideways movement in the performance might be disappointing, but we feel like the performance is adequate for the average driver, especially after accounting for the fact that there is a price drop compared to the current Bolt.

While the current performance and range might be suitable for most people, the 55 kW charge rate sticks out like a sore thumb as most new EVs are coming out with 100 kW charging at the minimum. According to Chevy, this should get you 100 miles in 30 min. in a Bolt and 95 miles in a Bolt EUV. It certainly would on the lower end of my list of current EVs that I would like to take on a road trip.

That being said, everything that Chevy is doing in regards to charging outside of the actual charge rate is great. The automaker has teamed up with EVgo to triple the number of fast chargers, adding more than 2,700 chargers by 2025. Chevy owners will also be able to access over 80,000 chargers nationwide through their myChevrolet app.

To help with the ease of charging the Bolt EUV will come standard with a Dual Level Charge Cord which comes with a changeable plug that will allow owners to charge using both a 120V and 240V outlet. The charge cord is also optional on the regular Bolt. Even more surprising is the Chevy is saying that it will cover the standard installation of a Level 2 charger with the purchase or lease of a 2022 Bolt or Bolt EUV. The service is being done in collaboration with Qmerit and will certainly go a long way into normalizing electric car ownership.

Autonomous driving and electric cars have started going hand in hand and so GM has placed their Super Cruise technology, which was previously only found in their Cadillac lineup, into the upcoming Bolt EUV. Super Cruise is the only system out right now that currently allows for the driver to take their hands off the wheel for an extended period of time. It however will not be the Enhanced Super Cruise found in the Cadillac that allows for lane changes.

This technology comes with the caveat that you must be traveling on the over 200,000 miles of mapped out roads in the US and Canada which look to predominantly be interstates. So if you happen to be on an unmapped road, you won’t be able to take full advantage of the system. However when you are on one of the mapped roads, you will be able to take your hands off the wheel and a small camera will track your eyes to make sure that you are still vigilant of the road, otherwise, it will send you alerts to return your attention.

The usefulness of the system is limited to how quickly GM can map out more roads, but it seems like they have been going at a decent pace.

The center console comes with your option of either Apple CarPlay or Android Auto as well as wireless phone charging (optional on Bolt) and a wifi hotspot. The center console also has car apps such as Spotify, Amazon Alexa, and the Weather Channel that you can download and use.

Most surprisingly of all is that both the 2022 Bolt and Bolt EUV are cheaper than the outgoing Bolt model despite keeping the same performance and upgrading the design and materials. The base prices (including destination fee) is as follows:

The refreshed Bolt slashes the price of the current Bolt by over $5,000 which is an outstanding move by Chevy and gives some credibility to their intentions of getting everyone into an electric car.

As always, you can’t have a car launch without some sort of special first edition and the Bolt EUV will be no exception. A Bolt EUV Launch Edition will be offered with Super Cruise, sunroof, unique wheels, special badging, and an illuminated charge port for $43,495 (including destination).

It is important to remember that GM is no longer eligible for an EV tax credit, at least at the time of this writing, but even without it, the price is very good for what you are getting and will be even better if there is some sort of update to the EV tax credit rules.

Both models will go into production this Spring and will be available this Summer.

What do you guys think of the two new models? Let us know down in the comments below.