Audi’s e-tron is growing larger and larger as time goes on. This time Audi showed off a Q4 e-tron electric SUV concept that will make its way to production lines by the end of 2020.

The small SUV/crossover market is one of the most popular segments in the world currently. So it is no wonder that many manufacturers are opting for an electric SUV as their first outing. With the Audi e-tron only just now starting deliveries, Audi is wasting no time on announcing another electric car to fill a segment that is in demand.

Unsurprisingly the Q4 e-tron shares a strong resemblance to it’s older brother, the e-tron. So if you were a fan of that design, then good news. If you weren’t, then I’m sorry you will have to look elsewhere. 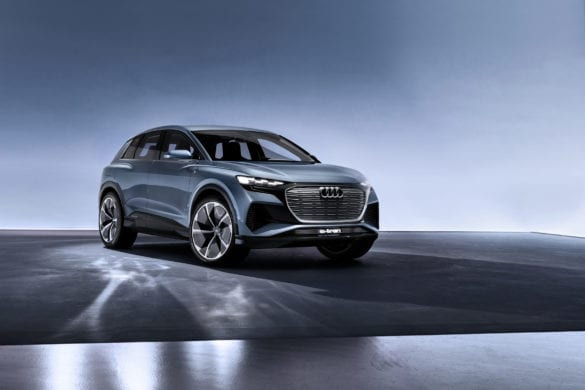 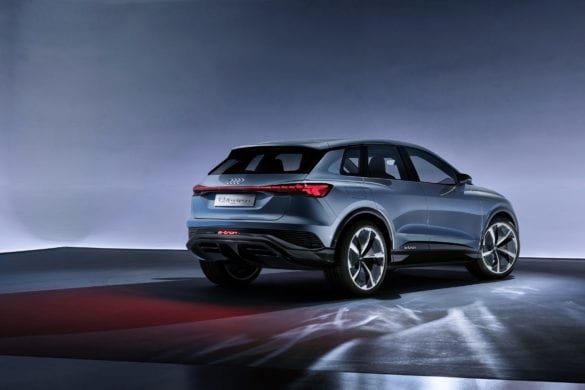 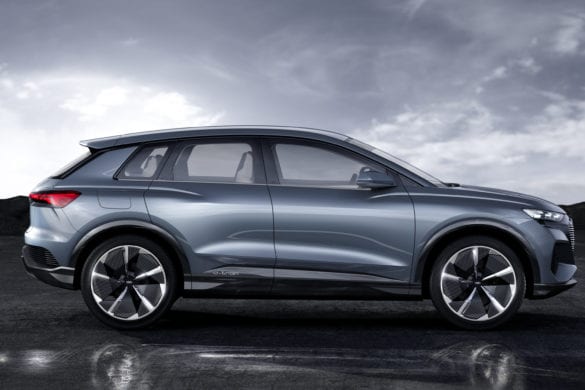 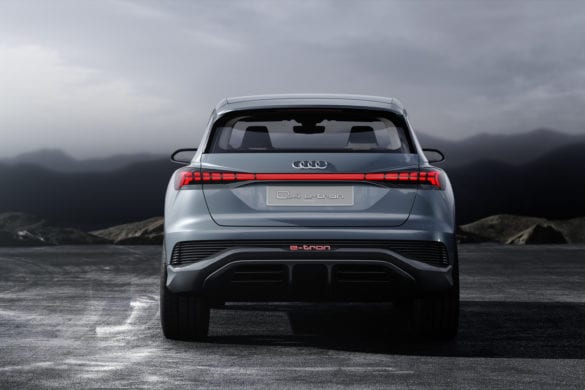 Audi describes the look as such.

The Q4 e-tron concept is identifiable as an Audi at first glance by the Singleframe with the brand logo, the four rings. And it will take no more than two glances to see that this is an electric Audi e-tron: Like the first production Audi with electric drive, the new concept vehicle also features a structured closed surface within a broad, almost upright octagonal frame in place of a traditional radiator grille. Air is supplied via large inlets that extend from below the two matrix LED headlights all the way down to the front apron.

Additionally the Q4 e-tron has had paint specifically made for it. Due to its composition it allegedly is able to reflect light and heat away from the car better.

Finally, the body paint in “Solar Sky,” a shade of blue that changes depending on the angle of the light, is a sustainable innovation in two senses: The paint, which was developed specifically for the Audi Q4 e-tron concept and produced under environmentally friendly conditions, effectively reflects a short-wave fraction of sunlight, near the infrared spectrum. This reduces the build-up of heat on the surface of the body and the interior significantly. This benefits the subjective well-being of the occupants while at the same time reducing the energy input required for the air conditioning, which is then not needed as much to cool the vehicle interior on warm days. This, in turn, improves the range and the global carbon footprint of the Q4 e-tron concept.

I am unsure if this is done by other automakers, but regardless it’s a pretty novel idea that I hope sees some use if its actually useful. 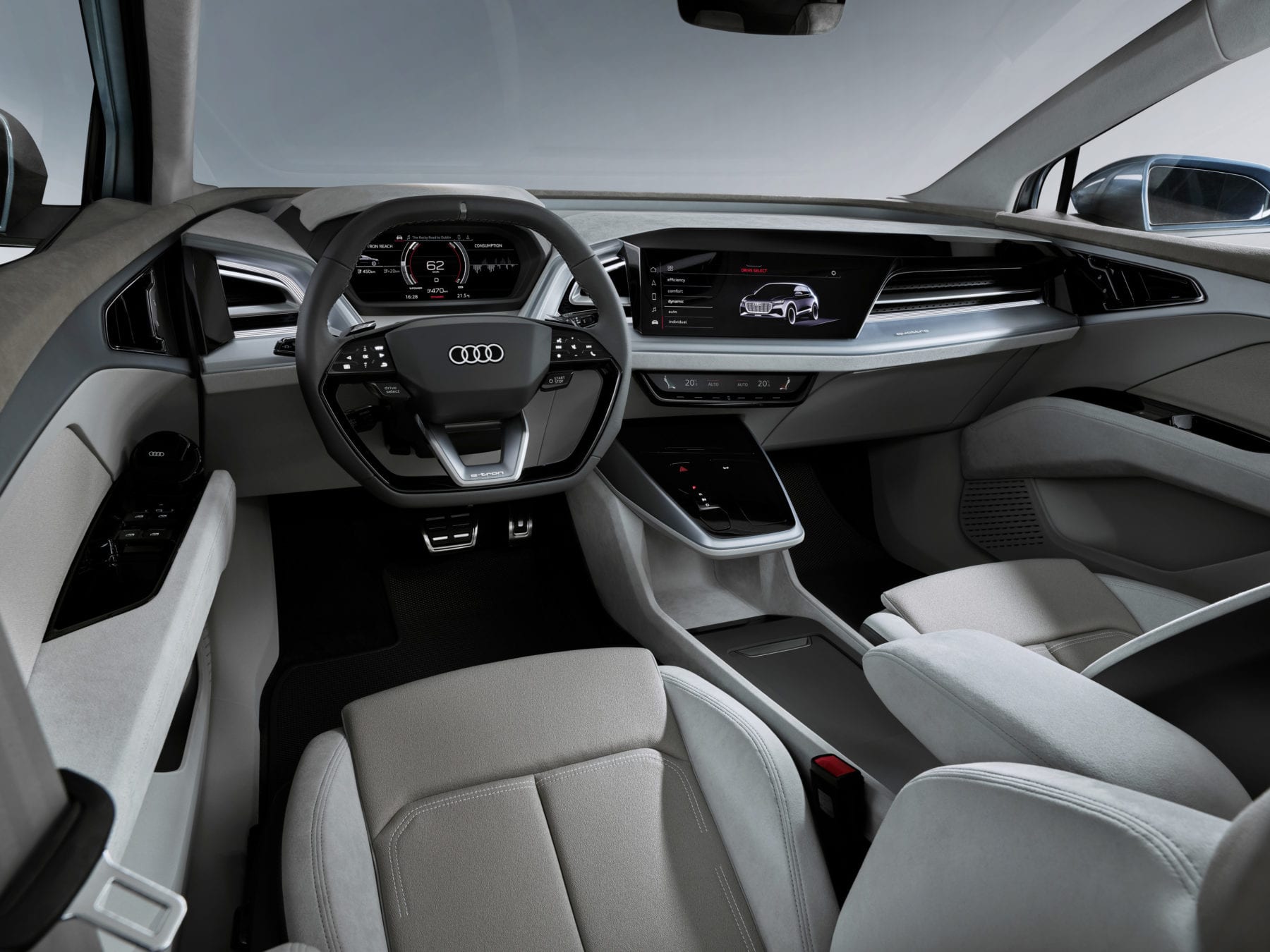 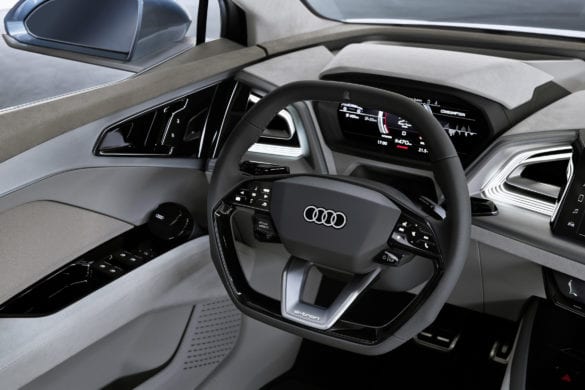 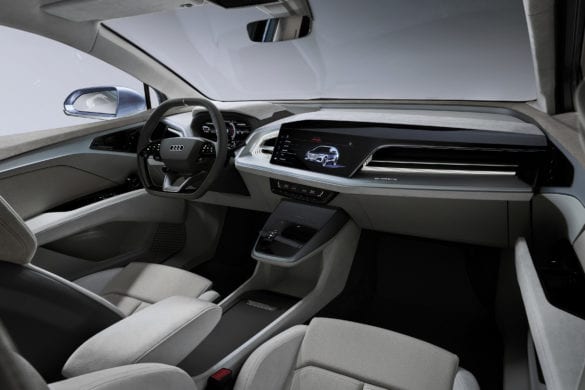 One of the benefits that this small electric SUV has over its larger counterpart is its range. While the Q4 e-tron is significantly smaller than the e-tron, the battery is not much smaller. Audi has decided to cram an 84 kWh battery into the Q4  e-tron. As such, Audi is saying that the Q4 e-tron will have a WLTP tested range of 450 km (279 miles).

With the Tesla Model Y being revealed on the 14th, there will no doubt be comparisons about which is the better electric SUV.

While the Q4 e-tron is not due for another almost two years, Audi seems to really be pushing electrification. Its one thing to read about a company’s plan for electrification. It is another thing to be able see some of cars materialize. The Q4 e-tron is now the fifth out of twelve electric cars that Audi plans to release by 2025. The other 4 being: the already released e-tron, e-tron Sportback (to be shown later this year), Q2L e-tron (Chinese market), and e-tron GT. Before the end of 2020, Audi plans to have 5 electric models on the road.

Obviously with the release date so far away, there is no word on pricing yet. But given its size and two additional years of streamlining, this should be Audi’s cheapest electric offering.