The I.D. BUZZ CARGO’s unique form factor draws clear inspiration from Volkswagen’s own I.D. BUZZ, but has been redesigned for commercial use. The electric van will be able to take up to 800 kg of cargo and travel over 550 km (342 miles) under WLTP cycle if equipped with a 111 kWh battery. Interestingly enough, the I.D. BUZZ CARGO will also be fitted with a solar roof, allowing for to 15 km of additional range each day. With a recommended battery size of 48 kWh, the electric work van would be able to fast charge up to 80% in just 15 minutes at 150 kW of power. The I.D. BUZZ CARGO will also be able to supply power to high-performance work tools thanks to its built-in 230V electrical sockets (16A) via the battery.

In a recent press release, Volkswagen extrapolated more on details regarding the I.D. BUZZ CARGO’s size:

This concept vehicle shows how Volkswagen Commercial Vehicles is launching into the new era of electric mobility. Back in August, the company already presented the brand’s first all-electric van with the world premiere of the new e-Crafter. While the e-Crafter launched as a panel van with an overall length of 5,986 mm and a maximum payload of 1.75 tonnes, the I.D. BUZZ CARGO concept is positioned in the size class beneath the Crafter. The payload (maximum load) of the concept vehicle is 800 kg; the I.D. BUZZ CARGO is 5,048 mm long, 1,976 mm wide and 1,963 mm tall. Its wheelbase measures 3,300 mm. By the way, the rear overhang was extended by 106 mm, making the cargo version of the I.D. BUZZ significantly longer than the van shown in Detroit. 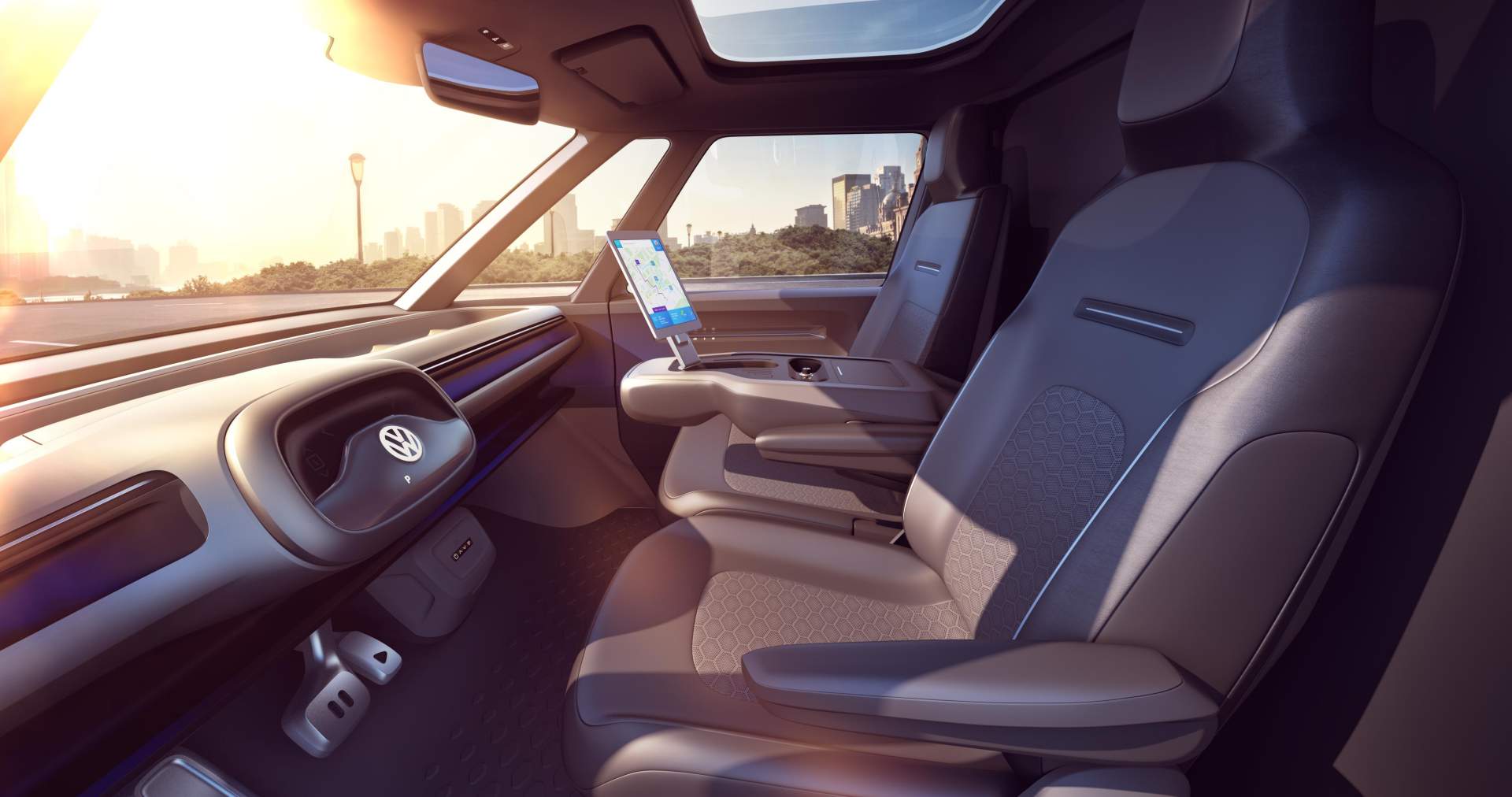 Interior with three seats in the front and computer workstation
The interior has also been tailored for commercial use – down to the smallest detail. From the driver’s cab to the rear, the I.D. BUZZ CARGO exhibits an entirely independent concept. Instead of two single seats, the concept vehicle is equipped with the driver’s seat and a double bench-seat on the front passenger side – a typical commercial vehicle solution. The middle seat can be folded down. This opens up a workplace, at which the driver can take care of organisational matters via an integrated laptop. In the automated “I.D. Pilot” mode this can even be done on the move. The driver activates the autonomous mode at level 4 of the corresponding VDA classification (VDA = German Automotive Industry Association) by simply pushing on the steering wheel for a few seconds. It then retracts into the redesigned instrument panel. Thereafter the driver’s seat can be turned 15 degrees to the right in order to enable the on-board computer to be operated from the ideal ergonomic position.

There is no cockpit in the conventional sense in the I.D. BUZZ CARGO. Instead, key information is projected onto the road in 3D via its AR head-up display. This positions the information precisely in the driver’s line-of-sight, allowing the driver to concentrate fully on road traffic. AR stands for augmented reality, a technology that shows electronically generated images in real space. Other information is displayed on a tablet; features such as infotainment and climate control functions are also operated via this portable tablet. The main controls for driving, meanwhile, are located on the steering wheel. Its inner section is not fitted with spokes and buttons – as is normal today – rather it has a touchpad with a variety of fields. The conventional steering wheel becomes a multifunctional steering wheel. Rear view mirrors are also a thing of the past in the I.D. BUZZ CARGO, with cameras projecting images onto small screens in the cab. Some elements are not changes: like in the T6 Transporter, there are numerous storage options in the dash panel, because the I.D. BUZZ CARGO was primarily designed to simplify working in the vehicle. 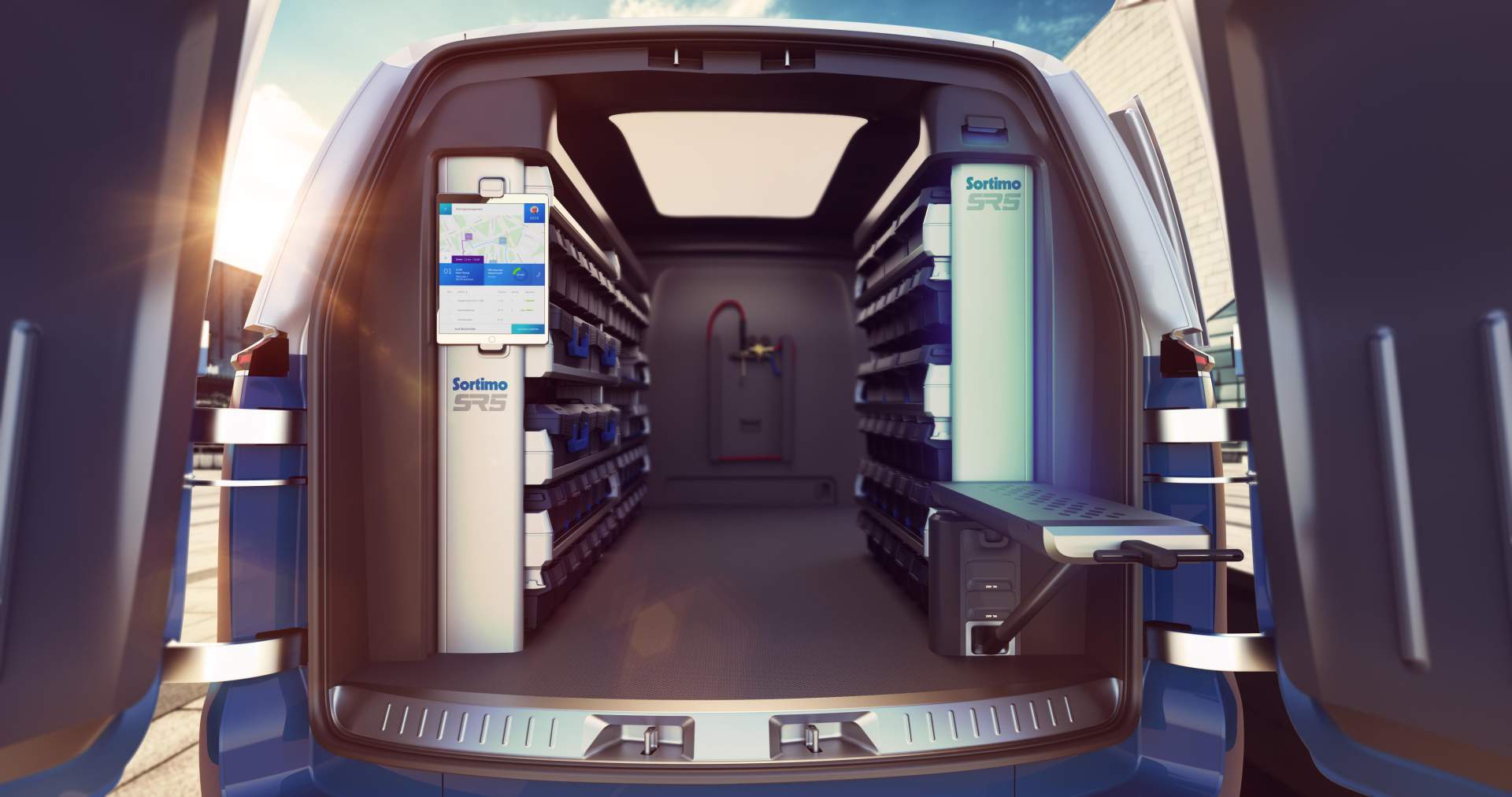 While the I.D. BUZZ CARGO has yet to go on sale, Volkswagen has since stated that the electric work van “could be launched into the market as early as 2021.”