While other manufactures have been tinkering with lackluster plug-in hybrids, Tesla went out and made the worlds best electric car. It has won award after award even being labeled as the car of the year for 2019. At 322 miles of range it is years ahead of the competition. However, some people think there’s room for improvement.

One of the biggest hurdles with wrapping your mind around switching to an electric car is its limitations. Traditional vehicles achieve over 500 miles of range and offer 5 minute refueling times at just about any street corner. Sure, the 322 miles of electric range that the Model 3 offers is a lot, but it’s just not enough for everyone’s driving habits. Even with Tesla’s industry leading Superchargers rapidly expanding, you’ll still have to wait significantly longer to charge an electric car when compared with filling up a gasoline powered vehicle.

Of course for most people this worry is nonexistent. The average American drives under 40 miles per day which is just a fraction of a Tesla’s battery capacity. Unlike traditional cars, with home charging you wake up every single morning with a full “tank”. Most EV owners will never even visit a charging station. But again, this is not suitable for 100% of consumer scenarios. That’s where a plug-in hybrid comes to play.

In Austria, Obrist Powertrain has developed something that is sure to anger Tesla fanatics, a gas powered Tesla Model 3. 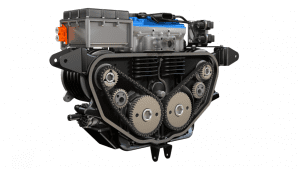 Rather than using the standard 74 kWh battery found in a Long Range Tesla Model 3, Obrist uses a two-cylinder gas powered engine with a much smaller 17.3 kWh battery. Swapping the battery drastically cuts the vehicles weight and cost making it both more efficient and economical.

With seven years in development, the hybrid Model 3 is a bit different from other plug-in hybrids on the road today. Using a “HyperHybrid” system, the combustion engine doesn’t just turn on when the short electric range dies out. Rather, when driving at speeds over 40 mph (60 km/h), the motor kicks in as a generator used to gradually charge the battery. The electric car is still solely driven on battery power. According to Obrist, this system of constant and gradual charging slows down the range degradation seen in EVs.

To keep the new-age EV feel, the company developed the “Zero Vibration Generator” to run smoothly and silently with acoustic and thermal insulation. The generator is tightly fit into Tesla’s iconic front trunk.

Image by Thorsten Rixmann and courtesy of Edison

At the going rate of $200 per kWh, a Tesla Model 3 battery can cost nearly $15,000. The cost of the Obrist hybrid generator is just ~$1,335 (€1,200) with the battery at ~$2,230 (€2,000). This means that a hybrid Tesla conversion would actually cost almost half as much as the standard one made available by Tesla. That alone is enough to justify the purpose of this vehicles existence.

Using the hybrid system, the Model 3 is able to achieve a ridiculously high range of 620 miles (1,000 km). Calculating gas consumption leads to an efficiency rate of 120 miles per gallon. A hybrid Tesla Model 3 is the no-compromise vehicle of today.

Tesla Arcade – 14 Tesla Games – Everything You Need to Know

not a prius prime . . . .more like an i3 …. which was cut from BMW’s production for lack of interest. At least buyers are more interested in the Prime. 😉

You just invented the Prius Prime.