The Tesla Q1 2020 Earnings Report was released yesterday, and to the surprise of many, Tesla was able to report a marginal profit for the first quarter.

Tesla had announced revenue of  $5.958 billion and a marginal $16 million profit which equates to about $0.09 per share profit (GAAP). This is a surprising result as many analysts predicted a small loss for the company this quarter due to the current events.

Tesla has now been able to continue its streak of profitable quarters to three, and it was their best first quarter in terms of production and deliveries, and the first time they achieved a positive GAAP. The company wrote that it was very happy with the strength of their deliveries prior to operations being interrupted in March:

Despite the expiration of various government incentives at the end of the last year, Q1 was paving to be the strongest quarter of deliveries until our operations were interrupted in March. As a result, we remain confident the growing global production capacity as quickly as possible. We are continuing to significantly invest in our product roadmap, including improvements in technology, as well as localizing production in Shanghai and Berlin.

This quarter saw an expansion of the Tesla lineup with the Model Y making its debut significantly ahead of schedule. With the Model Y having made its debut, Tesla is looking to tackle the large crossover market and hope to have the same success the Model 3 had in the sedan market. 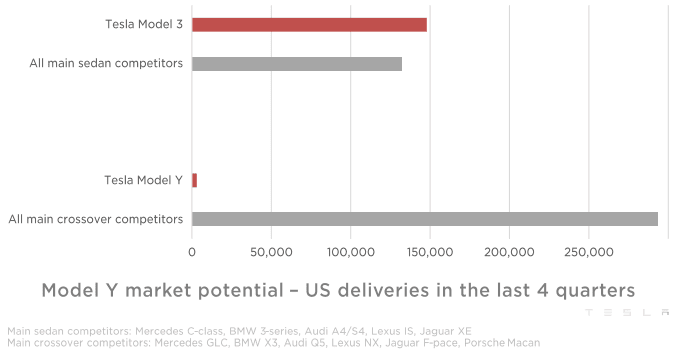 The final count for deliveries for Q1 are as follows with the production number in parenthesis:

No doubt a big help in achieving profitability this quarter was the increase in automotive gross profit margin that Tesla saw this quarter. While for the past two quarters it was hovering at around 22%, this quarter they were able to achieve a margin of 25.5%. This increase in margin, however, was slightly balanced out by the average selling price (ASP) continuing to decline as less Model S/X are being sold and more people are opting for the Model 3/Y.

The production spread of Tesla’s upcoming cars has been updated:

In regards to their other factories, Tesla stated that they believe that Model 3 production in Shanghai will be able to ramp up to about 4,000/week (about 200,000/year run rate) by the middle of this year. In regards to Berlin, they are very close to breaking ground and hope to see Model Y deliveries start from the factory next year. Finally, in the earnings call, it was stated that the Cybertruck factory in the United States can be announced as soon as next month, and will absolutely be announced within three months.

Also announced in the earnings call was that Tesla’s Battery Day will take place around the third week of May. Additionally, a subscription service structure for full self-driving features was also announced to hopefully be implemented prior to the end of the year.

Aside from cars, Tesla has also been increasing its energy storage deployment along with Superchargers which now sit at 1,917 stations, an increase of 29% since last year.

If there was one sore point in regards to this quarter, it was the negative cash flow that Tesla incurred due to overproducing and not being able to deliver about 15,000 cars. This, however, can be made up for in the next quarter unless Tesla sees a drastic drop in the number of deliveries it has.

Speaking of the next quarter, there is obviously a lot of uncertainty in the world and what to expect from the company in the near future. As such Tesla has resorted to keeping a lot of their forward-looking statements vague and will look to reevaluate next quarter.

So once again, the Tesla Semi faces another delay, pushing it back two years from its intended release date.

While Tesla was able to escape from a loss this quarter, it will be very hard for them to achieve profitability for Q2 given the fact that Freemont has been closed for a little over a month now. If other automakers are any indicator, the next quarter will not be pretty, Ford posted a $2 billion loss this quarter and says to expect upwards of $5 billion loss for Q2. Of course, this situation is outside the control of Tesla, so it won’t be surprising if they do not post a profit, but it will hurt them by stalling the momentum they found the past couple of quarters.