With the Tesla Model Y unveiling approaching, we thought it would be best to recap everything we currently know about Tesla’s next mysterious vehicle. It’s not much, as Tesla keeps most projects tightly under wraps, but this car has been floating around for a few years, so rumors and leaks have slowly compiled. We should have a general understanding of what to expect come March 14th.

Since the beginning, Tesla has had their first four mass produced vehicles pre-named. The S, E, X, and Y collectively spell … well, I’m sure you can figure that one out. The Model E ended up becoming the Model 3 after Ford claimed trademark status over the name. The Model Y name is just about officially confirmed as it’s been referenced as such by Elon Musk and Tesla numerous times. But don’t expect this naming scheme to continue, as we expect the Tesla Model Y to be the last vehicle to utilize the alphabet.

Tesla currently has a large sedan, mid sized sedan, and an SUV. They previously produced a sports car, the Roadster, and have plans to revive it. They’re also working on a pickup truck and there are rumors floating around about a van or bus. The Model Y will be one of the final pieces of the puzzle — a crossover.

Crossovers were actually the fastest growing vehicle segment before becoming the largest in the U.S. They account for nearly 40% of all passenger cars sold. Some are even saying that number could increase to 50% by 2020. So while the Model 3 made major sales throughout the world and continues to do so, the Model Y is expected to surpass that while being labeled under the most popular vehicle class. 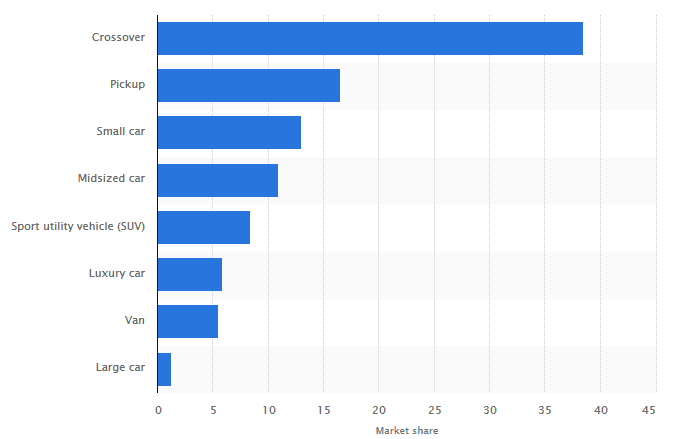 Gigafactory 3 is currently under construction in Shanghai, China. It is set to produce the “affordable” versions of the Model 3 and Model Y. Those cars will be shipped across the globe. The higher tiered models of the 3 and Y will be produced at Gigafactory 1, in the U.S. All Model Ss and Xs will be produced in the U.S. even after the completion of Gigafatory 3.

Shanghai Giga will produce affordable versions of 3/Y for greater China. All Model S/X & higher cost versions of Model 3/Y will still be built in US for WW market, incl China.

“Additionally, this year we will start tooling for Model Y to achieve volume production by the end of 2020, most likely at Gigafactory 1.”

There have been many rumors floating around about the design of the Tesla Model Y but very little has been confirmed. We’re going to have to wait until the reveal to see exactly how this car holds up to the competition. What we do know is that it will resemble the Model 3 and will share 76% of its components. It is set to be about 10% larger than the Model 3. It has been confirmed that the Y will not have Falcon Wing doors and instead will come with the standard.

“This is in contrast to Model S versus Model X where the theory was – I think Model X, we just – it’s sort of Model X to be like the sort of the Fabergé egg of cars. It’s an incredible vehicle and probably one – probably nothing like it will ever be made again, and maybe it shouldn’t. But it is a work of art. It’s a special work of art.
But the commonality with the Model S is limited. It was only about maybe 30% in common with the Model S, whereas Model Y is, I think, 76% was what it got in common with the Model 3. And we’re most likely going to put Model Y production right next to – in fact, it’s part of our main Gigafactory in Nevada.
So it will just be right there. Batteries and powertrains will come out and go straight into the vehicle. So that also reduces our risk of execution and reduces the cost of having to transfer parts from California to Nevada. It’s not a for sure thing, but it’s quite likely, and it’s our default plan.
I would expect Model Y will probably be – the [indiscernible] Model Y will be maybe 50% higher than Model 3, could be even double. The – as I understand it, the midsized SUV segment is the – worldwide is the most popular type of vehicle. So we’ll probably see a higher volume of Y than 3.”

In some leaked documents, Tesla mentioned the use of a 3rd row. Tesla stated that these documents were outdated so we cannot take them as fact. At just 10% larger than the Model 3, there doesn’t seem to be much room for a comfortable 3rd row.

The Tesla Model Y is not yet unveiled so we can only make assumptions on its specifications. With it’s release date and Tesla’s track record of staying ahead of the curve, I wouldn’t be surprised with a 400 mile range. Elon Musk mentioned that the Model Y will have slightly less range per kWh than the Model 3 due to its size and aerodynamics.

We 100% expect the Model Y to, at minimum, have the ability to charge at 250 kW in order to compare with the Model 3 and to fully take advantage of the new Supercharger V3.

The Model Y will be officially unveiled on March 14th at Tesla’s LA Design Studio. Those who earned enough referrals through Tesla’s referral program have already received their invitations to join the event. The event is closed to the public but will be live streamed on Tesla’s site at 8pm PDT. If you’d like to read rather than watch the event, we will be covering it live right here on EVBite.

Take a Walkthrough of the New Tesla Model Y