Mercedes EQS Revealed, Bringing the S-Class Into the Electric Age

Mercedes-Benz has added another model to its growing EQ lineup of electric cars. This time around, the German automaker is bringing its legendary S-Class into the electric age with the upcoming EQS.

Mercedes has been amassing a lineup of electric cars covering various vehicle segments and has committed to having eight different EQ models being produced by 2022. The S-Class for many has been the Mercedes, so it exciting to finally see the company’s most popular model getting an electric version.

If you liked the EQS concept that Mercedes showed off a few years ago, then you’ll probably enjoy what the production EQS looks like. While it made some changes from the concept to be more practical such as the headlights and taillights, I would say that Mercedes did well in carrying the design into the production version. 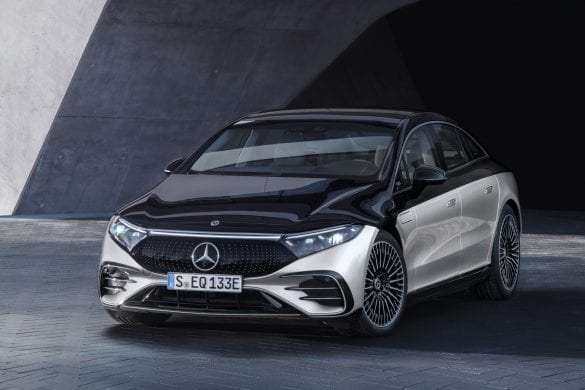 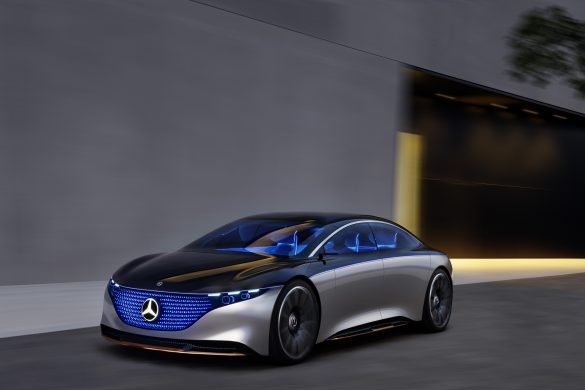 From a practical standpoint, the exterior of the EQS is as slippery as can be. Mercedes states that the EQS has a drag coefficient of only 0.20, making it the most aerodynamic production car and helping in achieve greater ranges. This number beats out the Lucid Air which revealed a drag coefficient of 0.21 over the summer.

Moving on to more subjective matters, the EQS features a very long roofline as Mercedes stated that they were able to push out the A- and C- pillars, leading to increased interior room. The EQS also features an uncommon two-tone paint scheme just below the window line. The headlights and taillights feature a thin light bar the wraps around the car and look to divide the car along where the paint changes, a neat design choice. 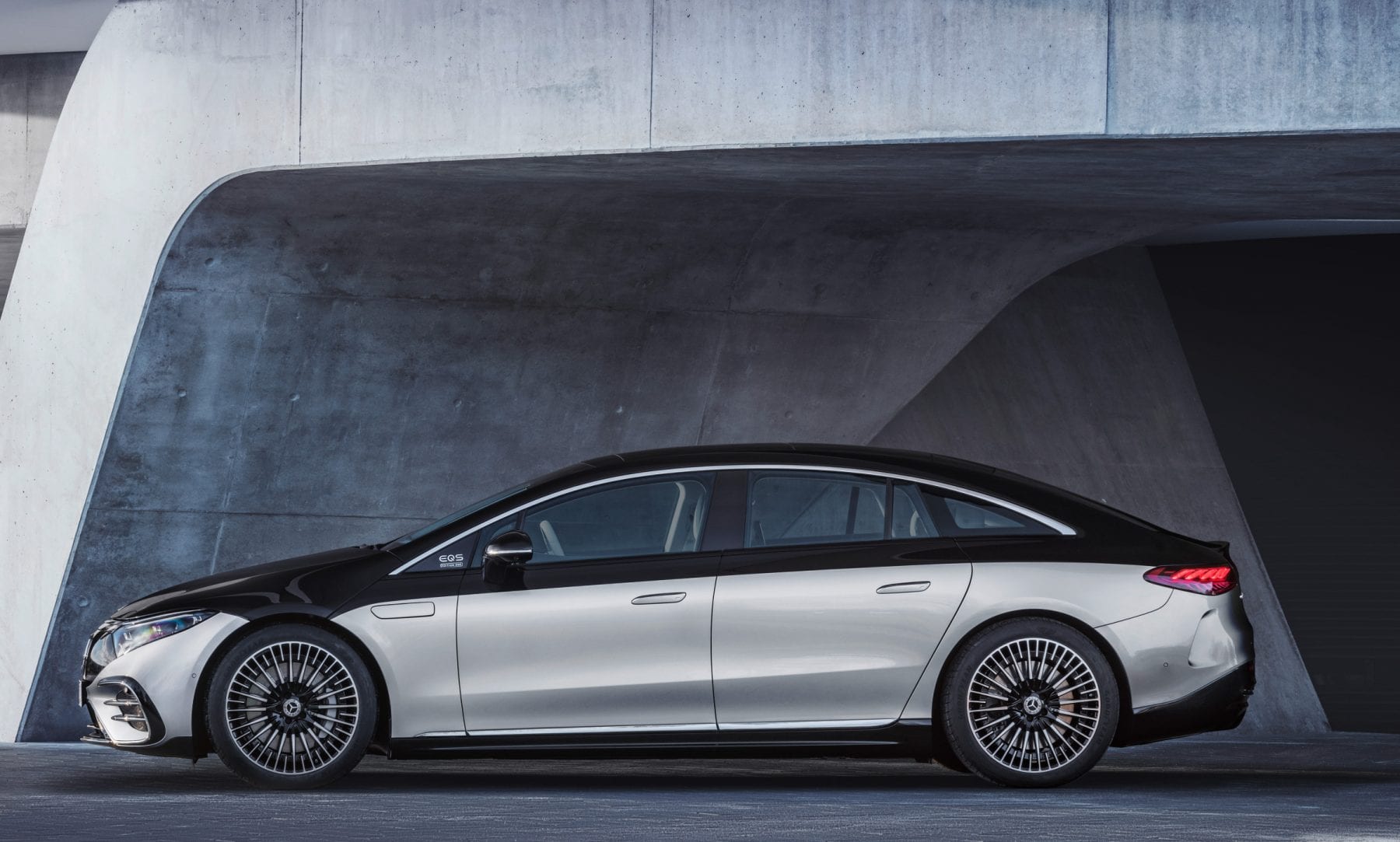 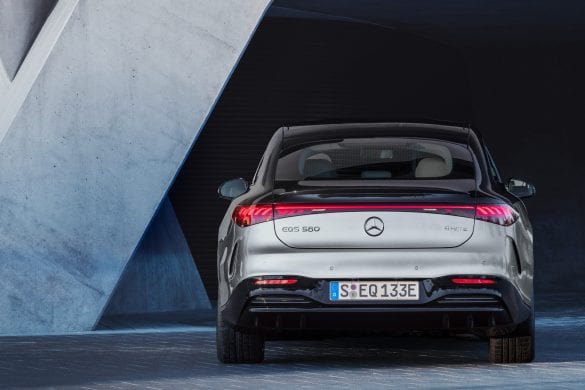 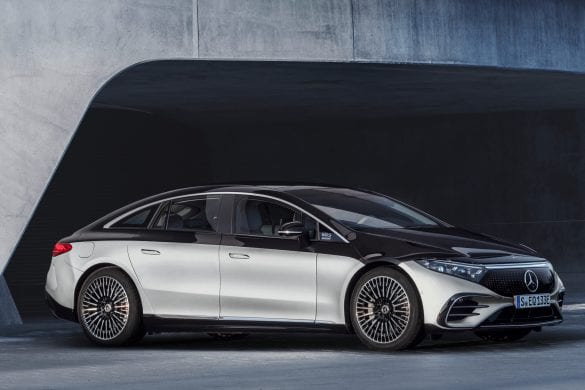 As with other automakers, Mercedes has kept the appearance of a grill in the front, but instead of cooling the non-existent engine, it now houses a multitude of sensors. Within the “Black Panel” unit you will find the various sensors of the driver assistance systems such as ultrasound, camera, radar, and LIDAR integrated there.

One quirk of the exterior is that the Mercedes EQS does not have a usable front trunk. Instead, the automaker decided to put an optional enormous HEPA filter in the space so that the interior air can be as clean as possible.

It wouldn’t be a proper addition to the S-Class family if the interior wasn’t filled with technology and luxury, and the EQS delivers. 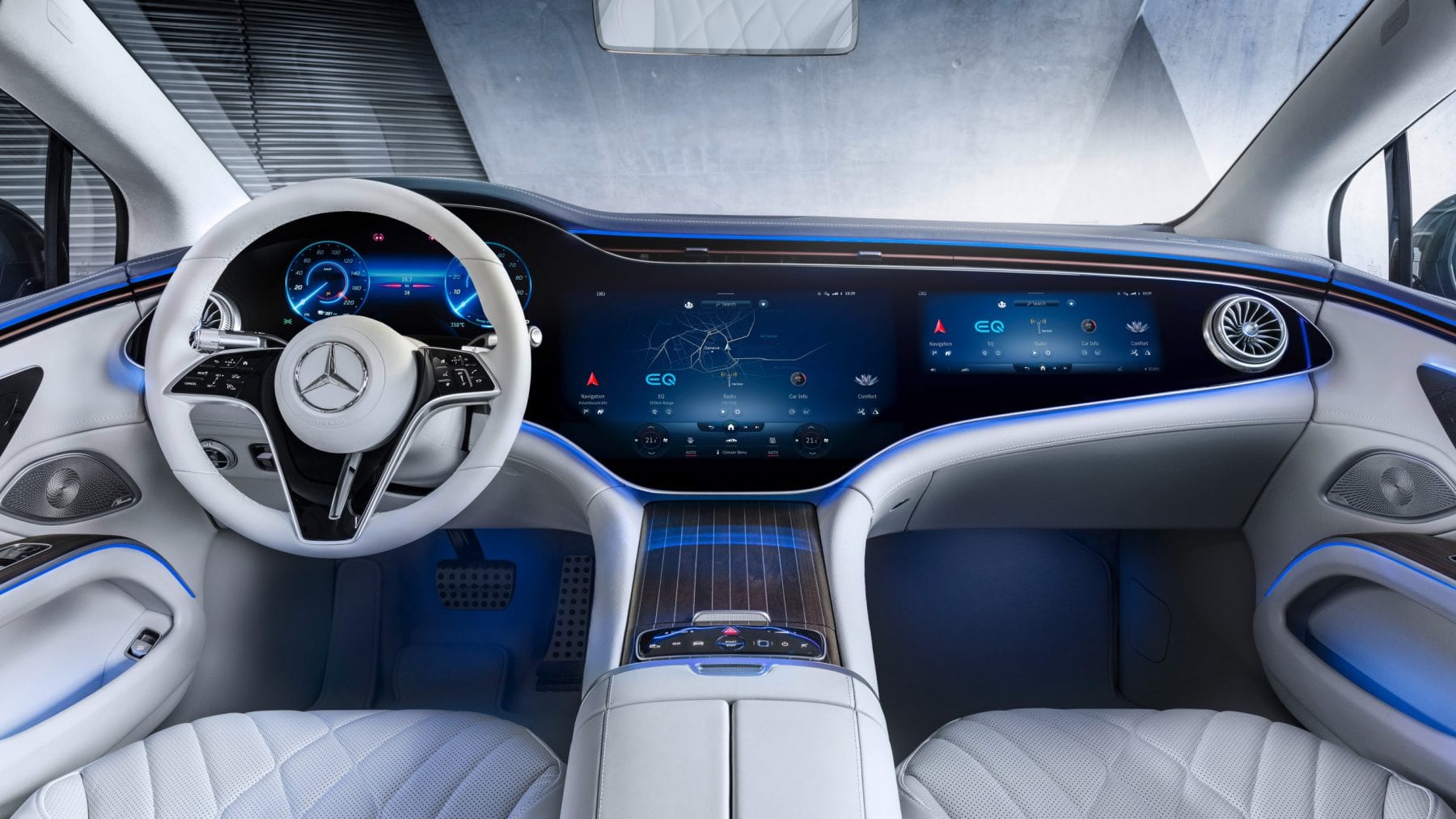 We can’t talk about a new electric car without mentioning the screen, and the EQS has quite the screen. The MBUX Hyperscreen stretches almost across the entirety of the dashboard with three screens that are sized: 12.3 inches, 17.7inches, and 12.3 inches. The leftmost screen is there as the gauge cluster while the larger center console and same-sized passenger screens are touchscreens with haptic feedback. Combining technology with traditional luxury, Mercedes also spoke about the process of having a single piece of glass covering all the scenes, which has to be bent at a high temperature to fit the curve of the dashboard.

On top of high-quality materials, Mercedes decided to allow you the option of having high-quality air. The HEPA filter that Mercedes is offering in the EQS is gigantic at  23”/16”/1.6” with an absorption area that is equivalent to the area of 150 football fields. According to the certification given to the HEPA filter, it can filter 99.65% of particles of all sizes, which is comparable to what is found in a cleanroom or operating room. But please, don’t perform any heart surgeries in your EQS. 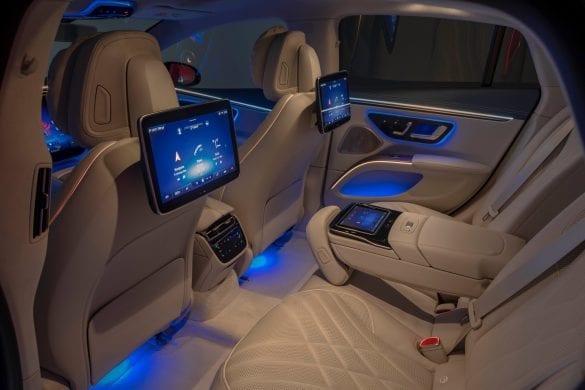 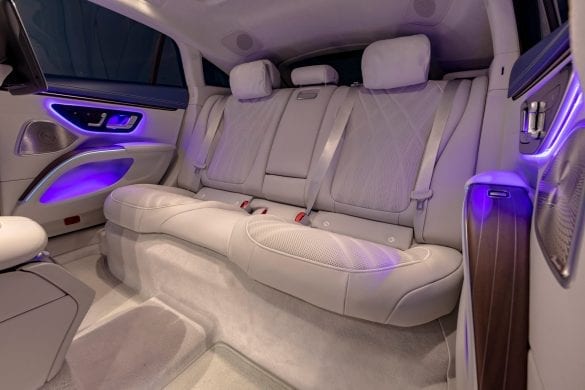 As if this all wasn’t luxurious enough, the Mercedes EQS will come with soundscapes such as trees rustling and beach sounds that it created with the help of an acoustic ecologist.  This can be combined with a Power Nap feature that “closes the roller blind of the panoramic sliding sunroof and moves the driver’s seat into the rest position. This creates an atmosphere that is conducive to sleeping.”

Mercedes has set the standard for a long time regarding what a luxurious exterior should look and feel like. I will look forward to seeing if they can continue that reputation with the EQS.

The Mercedes EQS is coming to the United States in two trims, the EQS 450+ and EQS 580 4MATIC. There will also a higher-powered 715 hp version coming, which will most likely be the rumored AMG version of the EQS.

You can find the specification breakdown in the table below.

The Mercedes EQS has some top-tier specifications, as it should. Some will probably bemoan the rather slow 0-60 time, but the S-Class was never a sprinter, so if speed is your game then you are going to have to wait for the AMG version.

One omission you will notice is that there is no range listed in the table. While Mercedes stated that both EQS versions will have an enormous 107.8 kWh of usable battery, they did not give the specific range of each trim. Mercedes did state that the EQS has up to a 478-mile WLTP-estimated range. Even when switching over to the more harsh EPA cycle, this should mean that the EQS 450+ should have a range of over 400 miles, making it a part of a very small club.

One neat feature of the EQS is its rear-wheel steering. The rear wheels turning in a couple of degrees to help with handling is nothing new, the EQS has the ability to have the rear wheels turn in a whole 10 degrees. This decreases the turning radius of the car drastically to 35.7 feet, the equivalent of something like a much smaller Volkswagen Golf.

As you have undoubtedly noticed by now, there is a lot of technology in the Mercedes EQS. One exciting feature that I haven’t touched on yet is how Mercedes plans to handle over-the-air (OTA) software updates.

The EQS is the first Mercedes to offer the option of activating completely new vehicle functions via over-the- air updates (OTA) in many functional areas. Available from launch: two special driving programs, games and the demo program “The Best or Nothing”. This means that, following the purchase and the initial new-car configuration, some of the features of the EQS can be adapted according to personal preferences. It will also be possible to unlock the rear axle steering with the larger steering angle of ten degrees. In addition to the classic purchase of individual functions, subscriptions, temporary activations and free test phases are also planned.

For a while now we have wondered when legacy automakers will be able to match what is being put out by Tesla software updates. It looks like Mercedes will be trying to utilize OTAs for more than bug fixes from the get-go. Let’s just hope that the games don’t suck. 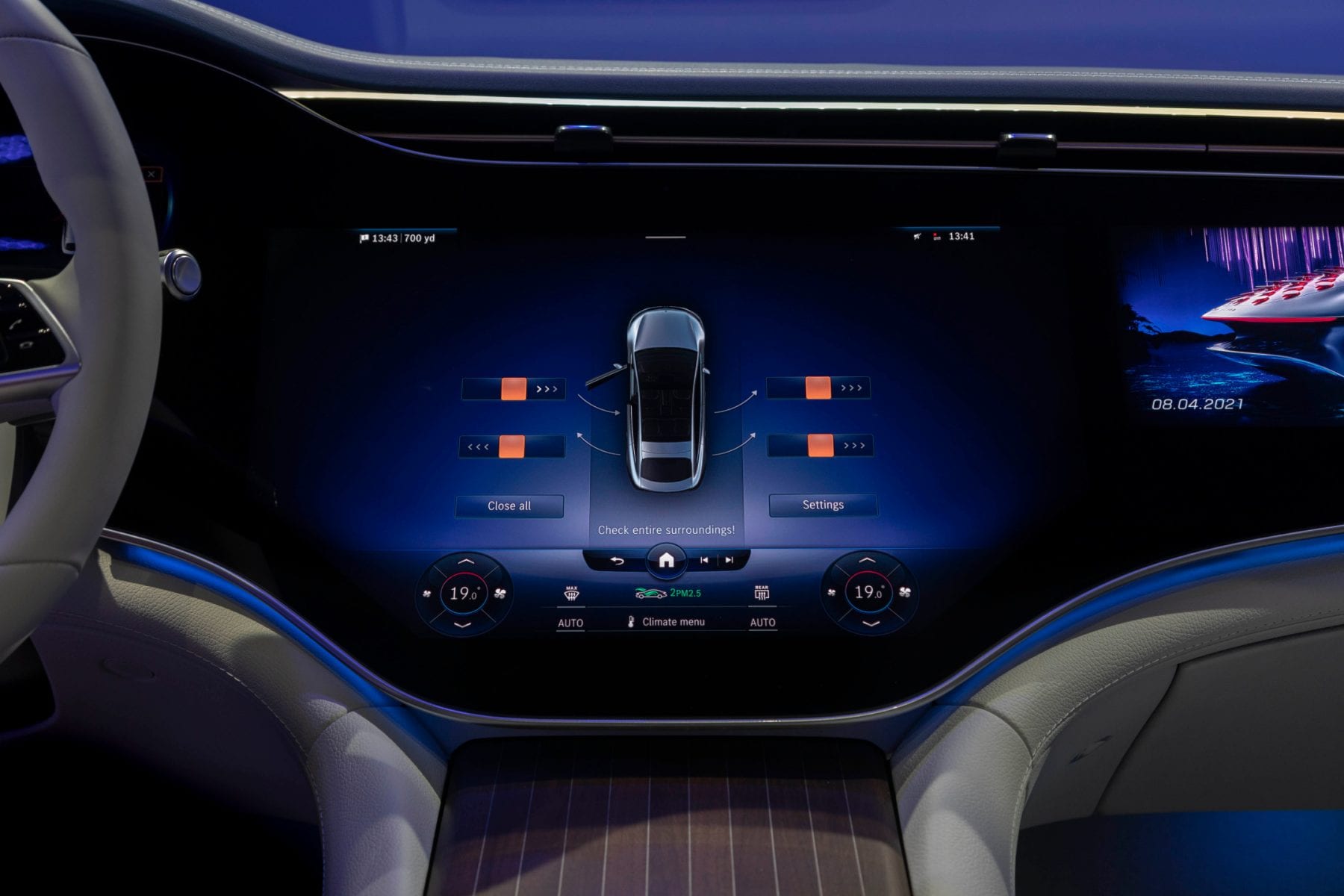 In terms of autonomous driving features, the EQS doesn’t have much past adaptive cruise control and lane-keep assist. Here is a list of their driver’s assistance features.

The Mercedes EQS is expected to start production this year at Mercedes’s new Factory 56 which is aiming for carbon-neutral production. No production estimates have been given, but we can’t imagine that it will be too high a volume of a car, especially in the first year.

The EQS is expected to hit North America in Fall 2021. No starting price has been given, but we can all assume that it will be north of $100,000.

What do you guys think of the new Mercedes EQS? Let us know down in the comments below.