Continuing their mission to outdo and advance the automotive world as a whole, Tesla has once again overlapped two industries. With the introduction of the Tesla Model 3 acceleration boost upgrade, we now have DLC for cars. But is the $2,000 Tesla acceleration upgrade worth the relatively expensive price tag?

The Tesla acceleration upgrade was initially only available to the Model 3. Specifically the Dual Motor Long Range Model 3. While the car already packs a punch with a 0-60 of 4.4 seconds, the company thought it necessary to add a Tesla Model 3 power upgrade as an option. If convinced, you can purchase the Tesla boost option from within your Tesla account or Tesla app at a tap of a digital button.

When the feature was first introduced, it required that your car was on Tesla software update 2019.40.2 or newer. If you can’t find the Tesla power upgrade, this could be why. It could also be due to the fact that you don’t have a Dual Motor Long Range Tesla Model 3, but I hope you knew that.

Adding the Acceleration Boost option does just that, it boosts your acceleration (duh). The Model 3 Long Range currently has a 0-60 of 4.4 seconds but the Tesla Model 3 acceleration upgrade added, a half-second is shaved off. When purchased, your Tesla should instantly receive a new available update. Once the download is complete, your car is noticeably faster. That’s the beauty of over-the-air updates, something all other automakers still lack. The idea, in general, is held by many as the future of cars.

Not to bring up the elephant in the room, but why buy the Model 3 power upgrade when you could have bought a Performance Model 3 to begin with? After paying for the Tesla power upgrade the difference in price is a mere $6,000. For that $6,000 you’ll receive a car with a 0-60 of 3.2 seconds and a top speed 17 mph higher than the Long Range Tesla Model 3.

Additional to the performance specs, with the Performance Model 3 you’ll also receive Tesla’s 20″ Gray Performance Wheels. 20″ wheels are not available on the Long Range Model 3 but if you’d like to opt for the largest set available, you’ll have to dish out an extra $1,500 for their 19″ Sport Wheels, only bringing the price between the two even closer.

If you need to go even faster, Tesla offers a Track Package exclusive to the Performance Model 3. But understandably, not everyone needs a performance car. For those who already own a Long Range Model 3 and find the need in just a tad bit more power, the Tesla Model 3 boost upgrade is here for you.

With the Model Y finally beginning deliveries a few months ago, many have been wondering if a similar Tesla power upgrade would be made available. It took a bit of time but we now have an answer, yes there’s also an acceleration boost upgrade for the Tesla Model Y. Again, only for the Long Range variant.

Just like the Model 3 acceleration upgrade, this shaves off half a second from the 0-60 time for the same $2,000 price. Given that the Model Y leans closer to a family crossover than a track car, it will be interesting to see who exactly finds the need for the Model Y power upgrade.

Purchasing the Tesla Model Y acceleration upgrade is identical to that of the Model 3. Simply check for the available feature within your Tesla app’s upgrade section of your web based Tesla account. The only requirment on the vehicle side, apart from being a Long Range model, is that you’re on software version 2020.36 or later.

Is the Tesla Power Upgrade Worth It?

In terms of value, the Tesla Model 3 Acceleration Boost seems to be one of the best. For example, the $4,750 BMW M4 Competition package will subtract a mere 0.1 seconds from your 0-60 time. Albeit that also adds some cosmetic features as well, in terms of actual speed improvement, the Tesla Model 3 has it beat. Anyone who’s dabbled in tuning or upgrading traditional cars will tell you that it would cost much more than $2,000 to shave a half-second from your 0-60 time in any traditional car. 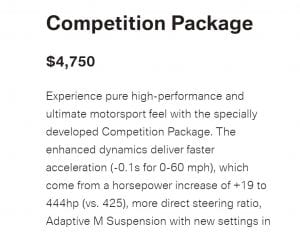 A faster acceleration time is great if you’re drag racing your car, but why else would you want it? Well, it’s fun. It can also be used practically when overtaking cars or safely merging on highways. Is it essential or even necessary? No, probably not. But it’s fun!

Apart from the monetary incentive, there’s a good reason for Tesla to not roll this update out to everyone for free. Surprisingly, there are a few cons that come alongside it.

If driven rough, a faster accelerating Tesla Model 3 or Y means faster tire wear. It would also potentially come with lower efficiency and even possibly higher degradation (only time will tell) which means less long term range. All of these are additional expenses added on top of the already pricey $2,000 price tag. Tires aren’t cheap and lower efficiency means a higher electric bill.

The Tesla Model 3 acceleration upgrade is available for new orders as well. But if after reading the price and listing the cons you’re still on Ricky Bobby’s wavelength, one has to ask, why not consider a performance model?

Tesla options are very lackluster. For the most part, you can choose your colors, wheel choice, and whether or not you want FSD. Most other automakers notably have a very long list of available purchasable options, performance features included. Charging for a software change that solely improves performance numbers is nothing new in the auto world.

However, previously all of Tesla’s updates have been free, including others that also increased your cars performance specs. Way back in 2017 we saw an update that took a full second off 0-60 times. More recently, we saw the Performance Model 3 receive a 5% improvement.

Charging for software updates is a new realm for Tesla and some are a bit bothered by it. Free performance upgrades were seen as one of the many Tesla benefits by new owners and now it’s a thing of the past. While understanding, we feel that charging for major performance upgrades is warranted in this case. As the company grows and evolves, having new income sources like this is greatly beneficial to its success.

But one has to wonder, how does this all fit in Tesla’s future plans? If Tesla has begun charging for minor performance upgrades, how long until all software updates come alongside a price tag? How much will they begin to charge for new apps and games?