The year is 1908, the world’s first mass-produced affordable car has hit the comically scarce streets. The transition from horse-driven carriage to gas-powered automobiles has officially begun. In hindsight, this probably was not the best option for the environment, but we are working on fixing that.

In a world with split ideology, there’s one thing the sane can agree on; this planet’s survival is obligatory. Whether pushed through regulation or public support, this transition is the epitome of humans’ position at the top of this cycle we call life.

Electric cars have been in the works for nearly a decade now with minimal impact, but things are quickly changing. Tesla’s all-electric Model 3 has become the overall best selling car in Norway for 2019. Throughout time, Tesla alone has nearly sold a million electric cars worldwide. Clearly, electrification isn’t just another fidget spinner fad.

With an unremarkable amount of electric cars currently on the road and an exponential amount to come, infrastructure has been forced to grow at the same, drastic, pace. Tesla’s proprietary charging network now sits at 1,604 stations with 14,081 charging points. Previously, when this number accounted for the vast majority of available chargers, one could say that electric vehicles were just a gimmick brought on by another hype company. Now, in 2019, with a clear vision of our future, Tesla no longer holds a strong lead and that thought is one of the past.

Legacy automakers are showing their commitment towards electrification. Volkswagen AG, owner of Porsche, Audi, Volkswagen, and others, has pledged $91 billion towards electrification. Even Mercedes has recently stated that they will cease engine development and focus on electric cars. Just about everyone is following suit as the path towards our electric future has already been carved out.

Newly formed electric car charging companies such as Ionity, ChargePoint, Blink, and many others are investing heavily in the future. EVGo, another charging station company, alone has over 750 stations just in the U.S. Another, Electrify America, has committed $2 billion in electric infrastructure over a ten year period. They plan to have 2,000 charge points spread across 500 stations in the nation by the end of this very year.

These new EV stations are not intended to cover a small niche. In fact, public chargers already outweigh our current charging needs yet these companies continue to expand at rapid rates. Many are even future-proofing their chargers by providing potential charge speeds that no car is currently capable of achieving. Mass deals are already being formed between chargers and rideshare companies to give drivers the opportunity to drive electric. The future is no longer tomorrow, it’s officially here.

“EVgo and Uber share a commitment to getting more drivers and passengers to experience the benefits of electric vehicles. Today’s announcement represents a big first step in a partnership between Uber and EVgo to help tackle the climate crisis by leveraging EVgo’s convenient and reliable fast charging nationwide network and deep experience in electrifying rideshare to deliver cleaner miles to Uber driver-partners, passengers, and the communities they serve.”

As car buyers ease into their new lifestyles, so will infrastructure, for the time being. Currently, charge stations lean more towards a couple of parking spaces in a parking lot rather than an actual station. While mostly placed conveniently at high points of interest, they’re missing what the public has come to love about present-day gas stations.

Now, we are finally starting to see the evolution of these future “gas” stations. Recently, Wawa, a high profile gas station company, has begun collaborating with Tesla’s Supercharger network. Tesla owners can now grab a cup of coffee during their quick pit stop at the electric gas station like every other driver on the road. Even the infamous oil company known as BP has been adding chargers to their present-day stations. As it turns out, most future gas stations won’t rely solely on gas, if any.

For the most part, the future is not so distant, it’s now. In Maryland, the first gas station to ditch oil has already opened. Due to an electric taxi service and the 20,700 electric vehicles registered in Maryland, the areas charging needs surpassed the amount of available infrastructure. Eventually, this will be the new norm throughout the country. Circle K, another major gas station company, did something similar by replacing all their pumps with EV chargers at one of their stations in Norway. Both small businesses and major corporations are seeing and acting on this newfound opportunity. 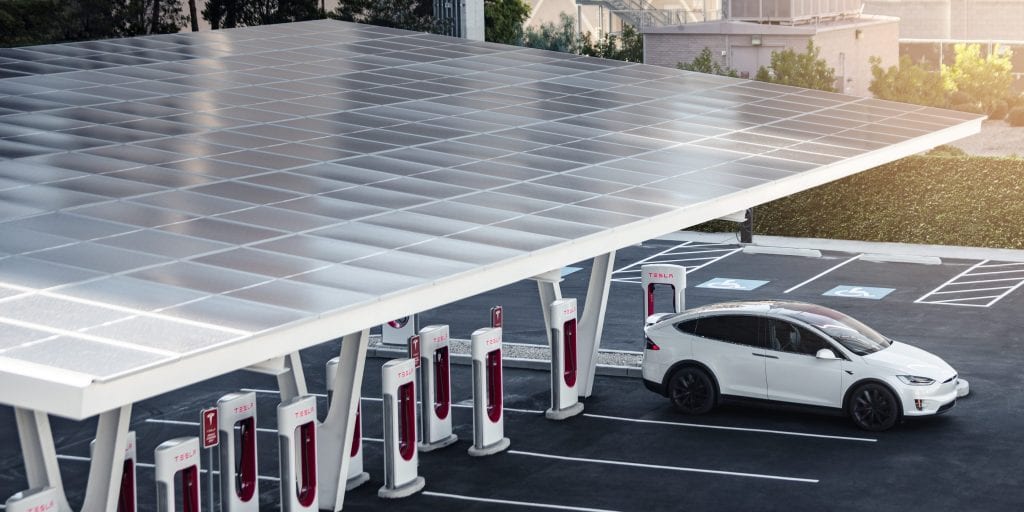 Through Tesla, we have gotten a glimpse of the future of gas stations. A Tesla Supercharger station in California is providing users with a private lounge experience filled with comfortable seating, charging docks, and of course, coffee. While it will be a short while before these become the new norm, thanks to the newly release Supercharger V3, some of these larger solar-powered stations are currently under development. There is no confirmation on whether or not these will provide the same lounge experience, but we are hoping for the best.

This adaptation towards fully sustainable vehicles is just about set in stone and confirmed. As we slowly transition into it, many stations will become horse stable hybrids but as time goes on, the horses will be gone leaving nothing but the electric cars. The big question is what will we call these new gas stations? Will charging station and network stick or will we get more creative? Electric gas station? Ultracapacitor biodome? That’s up for you to decide.