The Tesla Q2 2020 Earnings Report was released yesterday to much hype as the company was able to be profitable for four straight quarters now and is eligible for inclusion in the S&P500.

Tesla has had a surprisingly successful quarter given the world events. The company was able to actually able to have a small increase in deliveries compared to Q1. With strong sales even during turbulent times, Tesla was able to post another surprising profit for Q2, their fourth in a row.

Tesla also padded their war chest by adding an additional $535 million, reaching a total of $8.6 billion in cash and cash equivalents.

In regards to their profitability, Tesla wrote:

Our operating profit improved in Q2 despite challenging circumstances. Positive impacts included lower operating costs due to a temporary reduction in employee compensation expense, a sequential increase in regulatory credit revenue and deferred revenue recognition of $48M related to a Full Self Driving (FSD) feature release. These positive contributions were offset by significant costs related to factory shutdowns, as well as a sequential increase in non-cash SBC expense primarily attributable to $101M related to 2018 CEO award milestones.

While ASPs declined sequentially, improvements in product and manufacturing costs, driven by Model Y and China-made Model 3, and improved aftermarket software and connectivity revenue made a positive impact on our profitability.

An important step was made in this quarter as Tesla finally chose the spot for their next North American based Gigafactory that would be responsible for building the Cybertruck and Model Y. While it was not initially revealed in the update letter, it was revealed in the earnings call that Austin, Texas did beat out Tulsa, Oklahoma as the site. However, Elon did state that Tusla would definitely be considered whenever Tesla decides to expand once again.

Tesla’s Berlin Gigafactory and Model Y portion of Gigafactory Shanghai have also begun. First deliveries of Chinese-made Model Ys are expected to happen in 2021. An interesting note regarding the Berlin factory is that the Model Ys that will be produced there will look the same as we know now, but will use different technologies in the building process, so it won’t be exactly the same car as the one’s made in the US.

With all that in mind, here is the current breakdown of the production capacities of each factory. 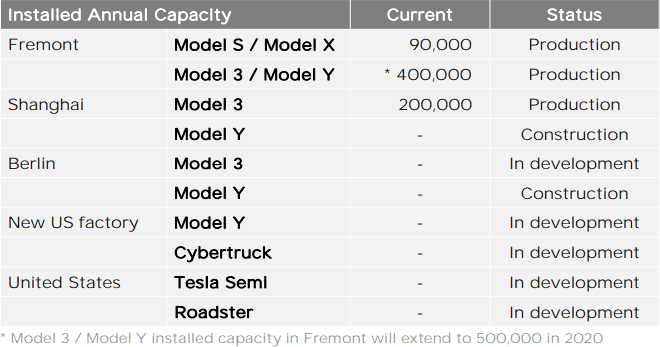 Moving on to their core technologies, not much new was stated in the Earnings Report. Tesla is now more than ever putting the spotlight on their Full Self Driving system which has been currently at work trying to navigate the car through intersections. Musk stated that currently, the system is working at “2.5D’, but once it is able to upgrade to “4D’, it will be a game-changer.

No further news for the batteries aside from the fact that Tesla is still having batteries as their bottleneck and Musk made asked the world to mine more Nickel during the earnings call.

Surprisingly Tesla has maintained that they are expecting to exceed 500,000 vehicle deliveries this year. With 320,613 deliveries left to go, Tesla will have to have record-breaking quarters and an average over 160,000 deliveries for the next two quarters to reach the half a million mark.

Its not all good news though, as Model S/X sales have continued to slump and I am sure that continued production of the luxury cars is something that is brought up frequently when talking about Tesla’s future product lineup. Additionally many will point out that the difference between the profitable quarter and a nonprofitable quarter were the regulatory credits which totaled over $400 million. However, given the slump the rest of the automotive industry has had over the past two quarters, any advantage is fair game.

If the world allows for it, let’s see if Tesla can maintain this momentum as they continue to expand their operations and put considerable work in their FSD.

For those interested to read more, you can see the whole report here.

How do you guys feel about the results of the quarter? Let us know down in the comments below.