Rivian, an American electric vehicle startup, has recently teased their new electric pickup truck ahead of its debut at the Los Angeles Auto Show later this month.

Despite the relatively low amount of hype surrounding the startup, Rivian’s electric vehicles have been in the making for nearly a decade at this point. After its inception in 2009 by founder RJ Scaringe, an MIT graduate, Rivian kept a rather low profile for years until 2017 when they purchased a shuttered Mitsubishi plant in Normal, Illinois. Shortly after purchasing the plant, Rivian announced their plan to invest $175 million dollars in renovations over the following seven years, promising to bring their first electric vehicles to production in 2020.

At the time, Scaringe stated:

“We couldn’t be more excited to purchase this tremendous facility in the town of Normal. This location will be crucial to bringing our products to market, and we look forward to being an active part of this vibrant community.”

After years of development, Rivian has finally given us a taste of their first electric vehicles. Earlier this week, Rivian dropped a brief 58-second teaser trailer for their new electric pickup truck and SUV, which you can view below.

As one would expect, the teaser doesn’t give away too much about the vehicles, only showing quick snippets of Rivian’s new electric pickup truck and SUV. We suspect that Rivian intends to use the trailer to garner interest in their vehicles before showcasing them later this month. What we have confirmed is that the electric pickup truck will be named Rivian R1T, while the all-new 3-row 7-passenger SUV will be named Rivian R1S. 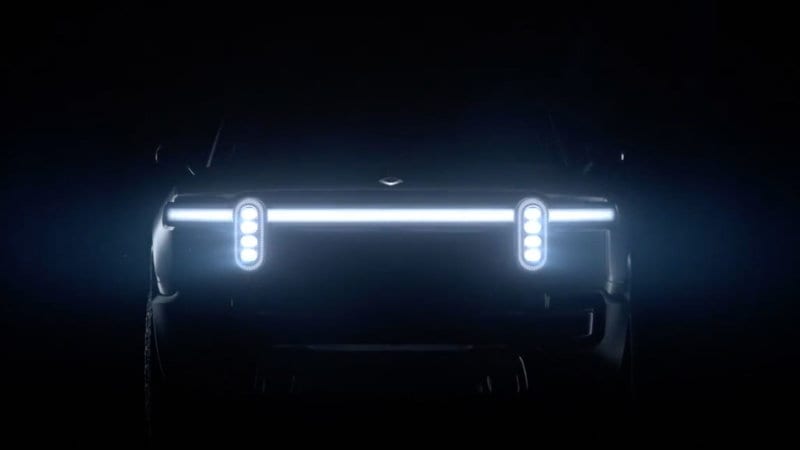 Teaser of shot of the Rivian R1S

Earlier this year, Rivian divulged some specifications in regards to the R1T electric pickup, claiming a 0 to 60 mph time of around three seconds, approximately 450 miles of range (at the largest battery configuration), and semi-autonomous technology. Rivian has since dubbed the cars “electric adventure vehicles.”

While we take claims made by electric vehicle startups with a grain of salt, we hope to see some great things from Rivian given their decade of preparation, and are excited to get a closer look at their electric vehicles at the upcoming Los Angeles Auto Show.