Hyundai’s newest electric model, the Kona Electric has finally received a range from the EPA. The car was found to have a very respectable range of 258 miles squeezed out from its 64 kWh battery.

Along with the range rating the Kona was given an MPGe of 120 combined, 132 city, and 108 highway. That 120 combined MPGe places it in third place after the Ioniq Electric (136 MPGe) and the Model 3 Long Range (130MPGe). It also puts it right in front of one of its biggest competitors, the Chevy Bolt (119MPGe). 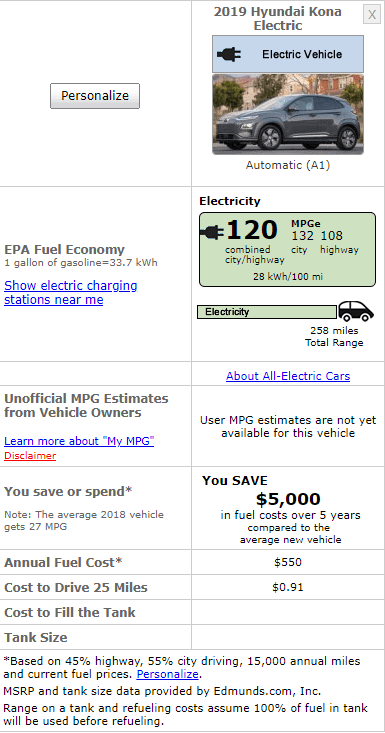 When the Kona Electric was announced, Hyundai claimed a range of “up to 292 miles” for the larger battery version. Unfortunately, like a lot of automakers that figure is based on the more lenient European standard. But when accounting for the less demanding tests most estimated the Kona to have around a 250 mile range on the EPA test. And it delivered right on the money with its 258 mile rating.

For the time being only the longer range version of the Kona is being produced, but there will be one with a smaller battery and lower range coming after.

This results in what Hyundai claims to be a range of 186 miles for the short range version. Of course if this number is based on European standards, then the EPA rating will most likely be in the 150-160 mile range, which is still very serviceable.

What do you guys think about the Kona Electric? Let us know down in the comments below.