Free Tesla Supercharging is back on the table as a perk for new buyers of the Model S and Model X. Sorry Model 3 owners, this one isn’t for you.

The announcement came earlier today via the Tesla twitter page.

And lo’ and behold, when you go and order a Model S or Model X, the free Tesla Supercharging perk is applied. 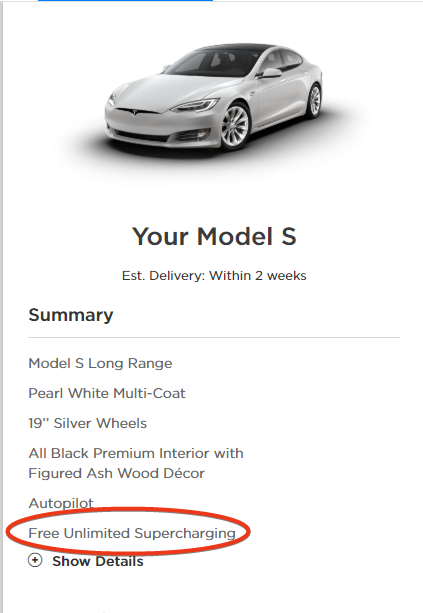 Free Tesla Supercharging had been initially offered to owners when the Model S/X first came out several years ago. It was a great perk to have and was instrumental in helping people feel more comfortable about switching over from fueling up at a gas station to charging at a Supercharger.

The perk was eventually discontinued in that fashion as the number of Teslas sold increased. Musk had considered that the practice was not really sustainable and has now used the perk to help sales move along when Tesla was not selling as many cars as they should have. The incentive has been used at certain times with the Model 3 and has also been an attractive perk to help sell inventory cars.

The free Tesla Supercharging was also a big plus of using a referral code to buy a Tesla as it granted you free Supercharging that way. However the referral program had also been changed and that is no longer the case.

For a certain time, the only way to purchase a Tesla and have free Supercharging included was if you bought a used Tesla that had a previous owner who had free Supercharging, as the perk is connected to the car and not the owner. However, Tesla had also removed the perk from its used inventory.

So why bring back a perk that is, according to Musk, not very sustainable?

A big fear of continuing to give out the free Supercharging perk, especially with the release of the higher volume Model 3, was that Superchargers would become crowded with all these owners that could charge for free. Given that Model S/X sales a pretty low compared to the Model 3 (17,772 vs. 77,634 deliveries in the past quarter, respectively), the fear of overcrowding is not as high as it once was.

Additionally, free Supercharging is a great perk to have, especially for those that frequently travel long distances. If the perk can sway some more people to buy a Model S/X, then I’m sure they are willing to eat the cost associated with charging the vehicles.

What do you guys think of the return of the free Supercharging? Let us know down in the comments below.