While Tesla may be the most recognizable brand name in the realm of electric cars, one of the much less talked about aspects of the Tesla Master Plan are their efforts in the solar energy business. Are Tesla’s solar panels as good of a deal as their cars? Let’s find out.

Solar panels are probably one of the best energy decisions that one can make. If you truly want to commit to a fully sustainable and clean way of living, solar panels are a no-brainer, and it’s no wonder why Elon Musk expanded Tesla into the solar panel and energy storage market. In Musk’s perfect world, electric cars would be able to get their energy exclusively from the sun (or other renewable energies) and never have to rely on the existing electric grid.

Tesla’s solar panels are made in partnership with Panasonic in Tesla’s Gigafactory 2 located in Buffalo, New York. These solar panels are given a black tint in order to make them far more appealing to the eye when compared to the brighter, more traditional styled panels found on older vehicles. Not only do these panels look good, they are some of the most effective on the market as a result of holding an efficiency rating of 21.76%.

First and foremost, lets take a look at pricing. Pricing is something that is going to depend on where you live and any possible rebates that may apply to solar panel installation. For the time being, there is a 30% federal tax credit that applies to solar systems, and it will last until December 31st, 2019, before being cut. The rate cut will follow the schedule below:

Along with the federal rebate, rebates may be offered by your state as well. Some of these state incentives and rebates can be found on Tesla’s support page. A quick Google search of “[state] solar panel incentives” should also yield some relevant information.

Due to pricing being different on a state-by-state basis, we have chosen the top five states that produce the most solar energy to illustrate price comparisons. The states are: California, Arizona, North Carolina, Nevada, and Texas.

Currently, Tesla offers their solar panels in three sizes: Small (3.8 kW), Medium (7.6 kW), and Large (11.4 kW). They offer a basic size guide to help any curious customers better understand exactly what type and size will work best for them. 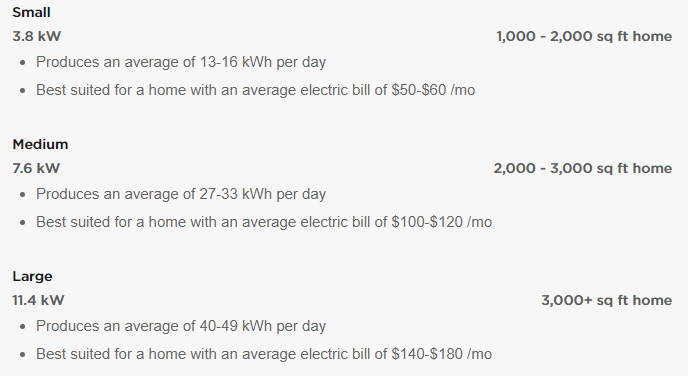 Before we go any further, it’s important to note that 1 kW is equivalent to 1,000 watts, so if a solar system costs $1/watt, the above 7.6 kW system will cost $7,600. Data for the average price of solar panels were taken from EnergySage, and it should be pointed out that all prices listed do, in fact, include the 30% federal tax credit.

As you can see, for each one of these states, Tesla falls in the lower portion of the range and, in some cases, is even well below the lower average.

So, how long should you expect it take for a solar panels to pay for itself? While the answer to that question is highly dependent on where you live, it will typically take longer for those living in the northern states to pay off their investment when compared to those living in the more sunny southern states.

Let’s use Colorado as an example to illustrate how long it will take to reap the benefits of a solar panel. Currently, Colorado charges an average of $0.1284 per kWh. A 7.6 kW system will cost $13,230 after the 30% rebate. Tesla states that this system will produce 25-32 kWh per day, which, at the current rate, is $3.21-$4.10 per day. If the rate stays constant, the system will pay for itself in roughly 8-12 years. This may sound like a long time, but these panels have a warranty that lasts 25 years, meaning that there will still be over a decade of use left in them.

What if you don’t want to wait that long for your investment to pay off, or you don’t want to be stuck with the large upfront cost? Well, Tesla has a pretty great deal available as long as you live in one of these six states and are a rate payer of any of the respective energy providers:

If you are a customer in any of these areas, you are eligible to rent Tesla’s solar panels for an incredibly cheap price. The only other cost aside from the monthly payment is a $1,500 fee for removing the panels if you decide to cancel the agreement.

If you live in California, for instance, you could rent the Tesla Solar Medium size array for just $130 a month. Tesla estimates that the system will capture $2,000-$2,800 worth of energy, meaning that you’ll net $450-$1,200 worth of energy annually as long as you keep the system. If you’re eligible to participate in Net Energy Metering , you can receive credits from your energy company or even a payment for the surplus energy you produce. Put simply, you might actually make money with these solar panels installed, and this deal extends to those who eventually decide to purchase the panels as well.

So, whether you decide to buy the solar panels or be lucky enough to live in a state where Tesla offers them for rent, deciding to go with Tesla solar is a pretty great decision. By coupling a solar panel with a Powerwall that stores your surplus energy, you’ll be able to use your energy in times when your solar panels aren’t able to capture direct sunlight, such as at night.

How to Use Tesla Full Self-Driving Without Crashing

» Where Tesla Solar Is Most Competitive – CleanTechnicasolarequipmentinstaller.com September 22, 2019 - 8:50 am

[…] reposted from EVANNEX. An earlier version of this article appeared on EVBite. EVBite is an electric vehicle specific news site dedicated to keeping consumers up-to-date on any […]

Correct Hanwha Q.Cell panels from Korea, basically none of this paragraph is correct:

Tesla’s solar panels are made in partnership with Panasonic in Tesla’s Gigafactory 2 located in Buffalo, New York. These solar panels are given a black tint in order to make them far more appealing to the eye when compared to the brighter, more traditional styled panels found on older vehicles. Not only do these panels look good, they are some of the most effective on the market as a result of holding an efficiency rating of 21.76%.

I have the Gigafactory 2 Panasonic panels on my roof from last year. They were much more expensive and are only 19% efficient. Panasonic reserved it’s highest efficiency panels for their own customers.

[…] reposted from EVANNEX. An earlier version of this article appeared on EVBite. EVBite is an electric vehicle specific news site dedicated to keeping consumers up-to-date on any […]

I don’t think Tesla is using their own panels for these deals. I was under the impression that they are using Hanwha panels. Any way to verify?