With Toyota being their parent company, Lexus has adopted the same hesitation towards the electrification as its parent. All the while, their German luxury counterparts are scrambling like mad to develop new electric cars.

It’s been known that Toyota has been a bit lackadaisical towards the movement toward all-electric and instead focusing on their hybrids and fuel cells. So it shouldn’t be a surprise that Lexus would be following in those footsteps as well.

At the recent Goodwood Festival of Speed, Yoshihiro Sawa, the President of Lexus had the following to say about the future of all-electrics.

“Our philosophy is to provide freedom of movement, so we have to develop technology on all fronts,” said Sawa. “We understand that electric is very necessary – more than some, perhaps, with our early move to hybrid, but we can also see that full EV will not suit everyone. You can’t make an electric Land Cruiser work, for instance – and there are people in remote parts of the world whose lives depend on that car.”

“Pure EVs currently require a long charging time and batteries that have an environmental impact at manufacture and which degrade as they get older. And then, when cells need replacing, we have to consider plans for future use and recycling. It is a complex issue – much more complex than the current rhetoric perhaps suggests. I prefer to approach the future in a more honest way.”

But even still, Lexus does have there LF-1 concept which can be “even all-electric” and Toyota will start releasing all-electric or all-electric variants by 2020.

Now without going on a rant, like I kind of did at the end of our Toyota video.

But it really feels like Toyota is stuck on its successes with its early hybrid systems and doesn’t want to come down from its dominance into a market where it won’t be top-dog anymore.

It comes off a bit elitist to state that since they had an early move towards hybrids, that it somehow gives them expertise into all-electric cars. That seems to be taking the situation lightly, as if creating a fully-electric vehicle that works well is no big deal for Toyota.

But until they have all-electric cars out that are well received, I don’t think they can have such a light stance on this.

On the other point about battery disposal, companies have already been working on recycling battery packs and using them as stationary energy storage systems.

This preference towards Fuel Cells and Hybrids can be seen in material like the above chart. Now yes, this isn’t an actual comprehensive chart, and is more of marketing material. But it still shows the direction that Toyota wishes to go and EVs are in last place all the way through the 2050s.

Now I don’t want to bash fuel cells, I think its important to explore all options, but we have to look at some of the facts. Let’s say I want to buy a Toyota Mirai, Toyota’s fuel-cell car. Where can I refuel it? 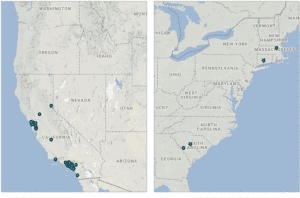 Well according to this map I better live in California, because there are only 40 stations and almost all of them are there. Most of the future stations (29 of the 34 planned according to energy.gov) will also be in California. So people who want to complain about lack of charging infrastructure really need to take a look at this.

Also fuel cells are less efficient then straight electric vehicles, or so I’m told, I’m not a chemical engineer. But maybe this can be improved with advancing technology. But then the question stands, why continue trying to improve one technology when a better one already exists.

I went on another rant, but still, I hope that Toyota can get behind going electric. They are an absolutely huge company that can make cars that cover most price brackets. Having them start their electrification will definitely help drive EVs into the mainstream.

What do you guys think about Sawa’s comments and the future of Toyota/Lexus? Let us know down in the comments below.