Tesla is testing the patients of many with their stated industry altering plans. While the Tesla Truck is set to be unveiled this very summer, someone out there just could not wait any longer.

Simone Grietz is a YouTuber mostly known by many for her custom robots used to complete mundane tasks. Being a fan of Tesla but needing a utility vehicle, she set out on a mission to develop her own solution. As is with the majority of larger projects, this one started off by building the Tesla dream team. Marcos Ramirez, Ryan Kalb, Laura Kampf, and Rich Rebuilds.

Marcos Ramirez is an artist who crosses into the electric vehicle world by modifying and improving cars for racing. In a similar fashion, Ryan Kalb is an engineer who built an electric car for his senior project and now works for Tesla. Like Simone Grietz, Laura Kampf is another YouTuber known for her custom builds. If you follow Tesla, you have probably already heard of Rich Rebuilds, the infamous Tesla backyard mechanic known for rebuilding totaled Teslas from the ground up. Those are just some of the many involved with the project.

Dubbed “Truckla”, this custom Tesla Truck was built by using a brand new Tesla Model 3 SR+. Just like the majority of Tesla customers, Simone bought her Tesla Model 3 online for an estimated $41,900 before taxes and incentives. The Tesla Model 3 SR+ comes with a range of 240 miles, a top speed of 140 mph, and a 0-60 of 5.3 seconds. We are just about certain that these stats will change due to the new aerodynamics and weight. Hopefully we eventually receive an update to see how much this custom Tesla build affected its range and speed. 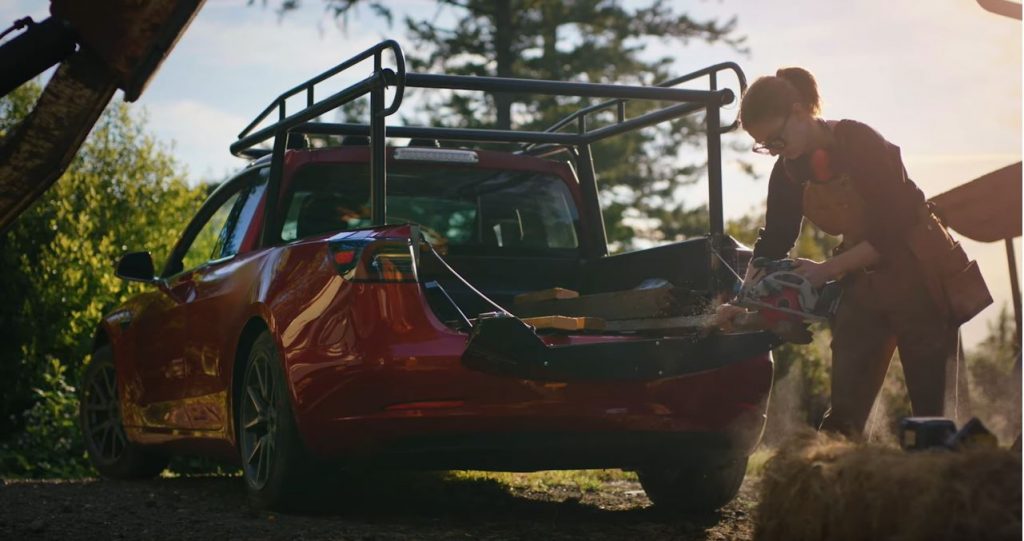 The Tesla Model 3 was chosen over a Model S or X due to its steel components. It simply was easier to modify and work with when compared to the higher end aluminum body of the S & X. Parts for this custom Tesla Truck build were taken from widely available sources. The rear window came from a GMC Canyon, the bed liner from a Ford F150, and the roof rack from a Craigslist ad. All parts had to be custom cut and welded in order to fit the Tesla Model 3.

While this Tesla Truck sure looks pretty, it is still far from complete. Simone states that they still have to properly waterproof the electric vehicle, finish the interior, put in bed liner, finish the body work, and work on wiring. She also has plans to repaint the Tesla and give it a lift kit so the next time you see this Tesla Truck it could look completely different.

You can watch the building process down bellow. For those who do not want to void their warranty and put in hours of hard work, you will have to wait a few more years for the official Tesla truck to hit the streets.