Consensus Shows Britons are in Favor of Electric Cars, Not So for AVs

Tracking the ever improving sentiment towards electric cars is a great way to see how much progress is being made in regards to worldwide electrification. A recent study from British insurance company, Aviva, shows that electric cars are gaining favor in Britain, while autonomous vehicles still need some work.

The results of this survey are found in a larger survey conducted by Aviva and YouGov which asked British drivers about their opinions regarding various car technologies.

First we will start with the electric vehicle portion of the survey which had some very positive results. 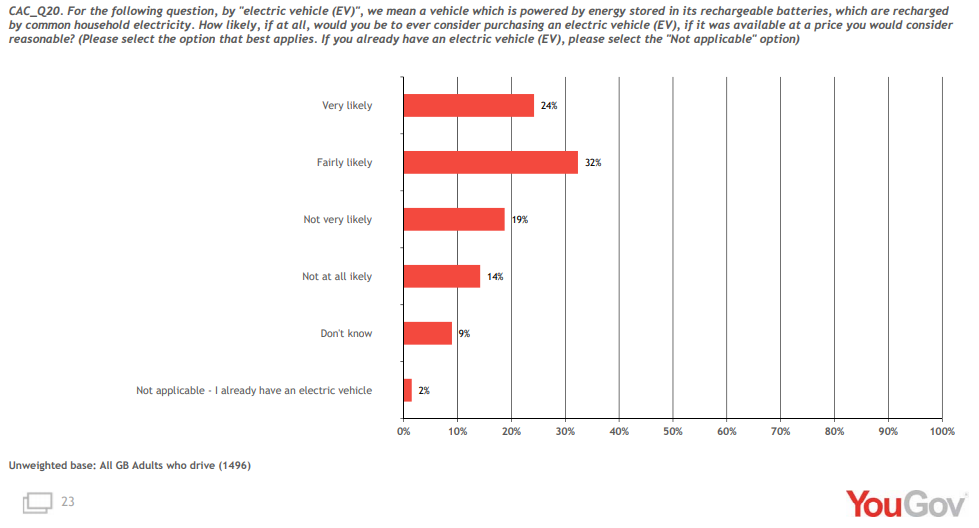 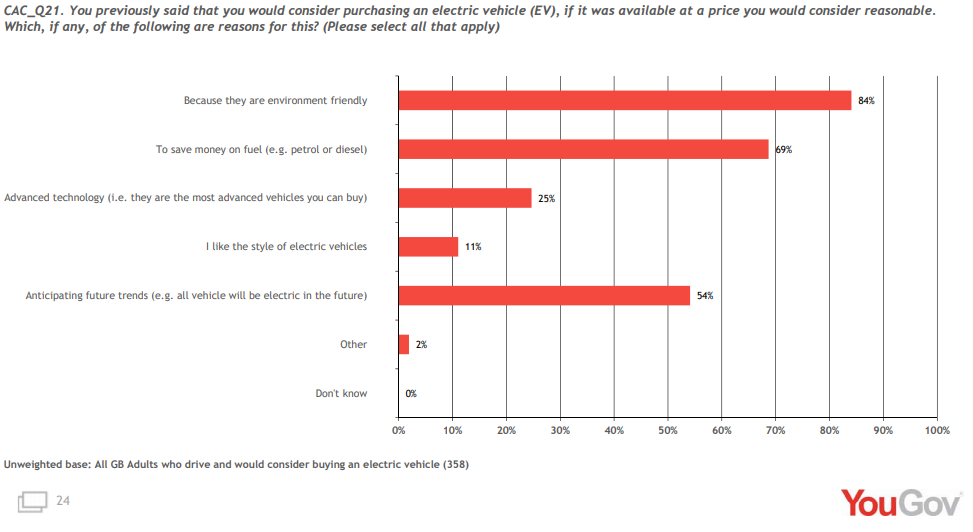 The top three reasons for wanting an EV based on the participants who said they were likely to consider one were: (84%) because they were environmentally friendly, (69%) to save on fuel costs, and (54%) because they anticipated that the world will move to all-electric anyways. 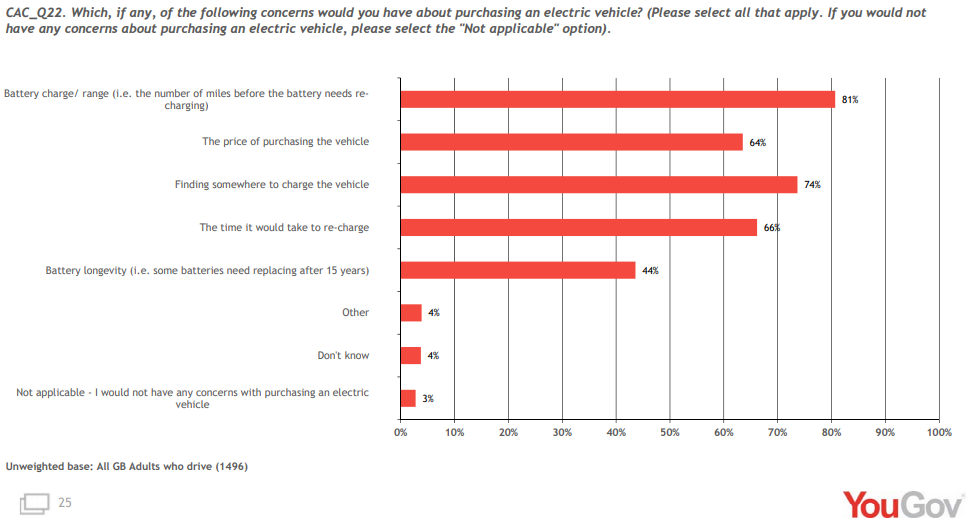 I am sure that you can easily guess the top three reasons that someone would not have considered purchasing an electric car. The reasons were: (81%) range anxiety, (74%) having to find a place to charge, and (66%) time it takes to recharge. Thankfully basically all of those issues are being improved upon as time goes on. More and more infrastructure is being built and future electric cars are aiming for higher ranges and charging rates. However, given that the average British driver drives about 20 miles per day, most current electric cars should already be more than enough.

Lastly, when asked if “Electric vehicles (EV) are more environmentally friendly than petrol and diesel vehicles”, 74% agreed, 15% disagreed, and 11% did not know.

Moving on towards opinions regarding autonomous cars, the sentiment was not as good. 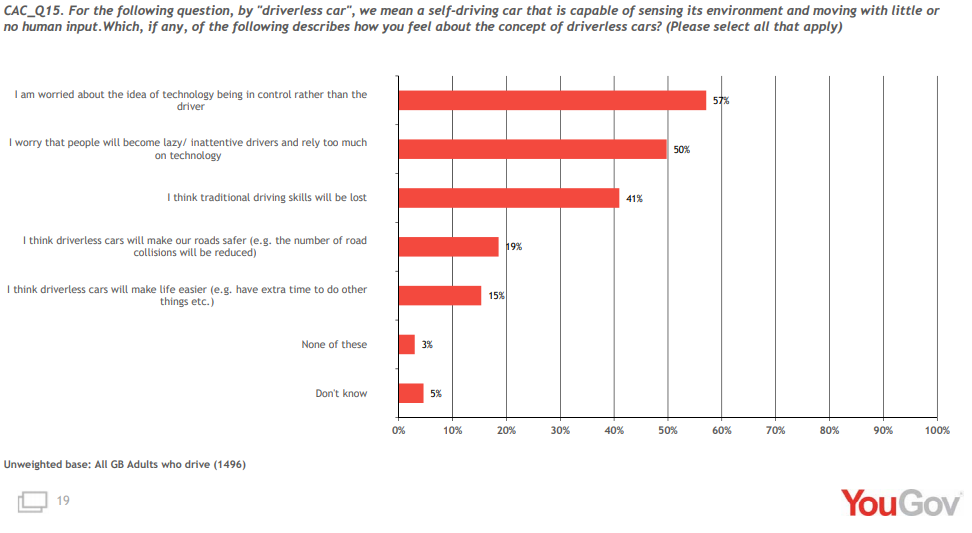 When asked about how the drivers felt about autonomous cars, the top answers were all filled with worry. The top three were as follows: (57%) worried about the idea of technology being in control rather than the driver, (50%) worry that people will become lazy/inattentive drivers and rely too much on technology, (41%) traditional driving skills will be lost. Unfortunately, given how young the technology is and how we hear more on the failures of autonomous driving rather than successes, these types of responses are of no surprise. 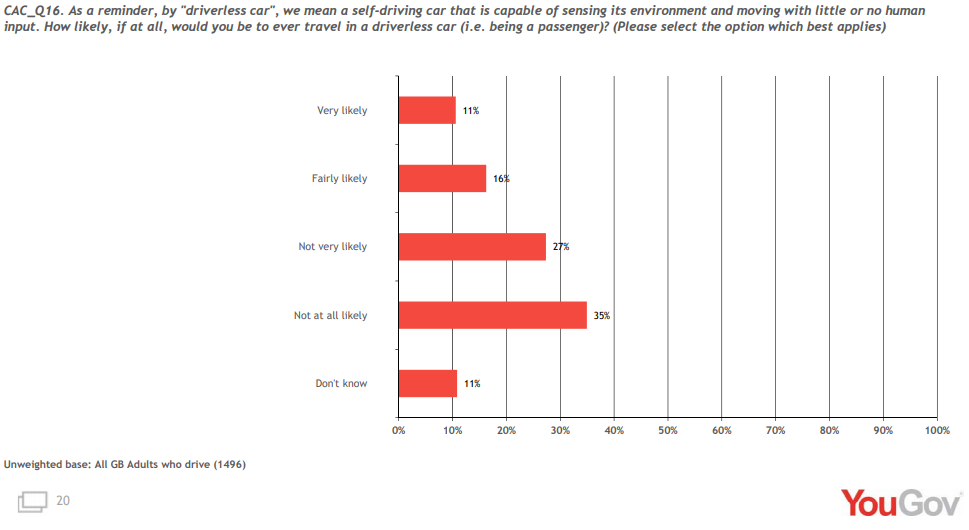 Obviously with the previous feelings in mind it is no surprise that only 27% of participants responded very or fairly likely to the idea of traveling in a driverless car. The number one response was for ‘not likely at all’ with over a third (35%) of participants feeling that way. 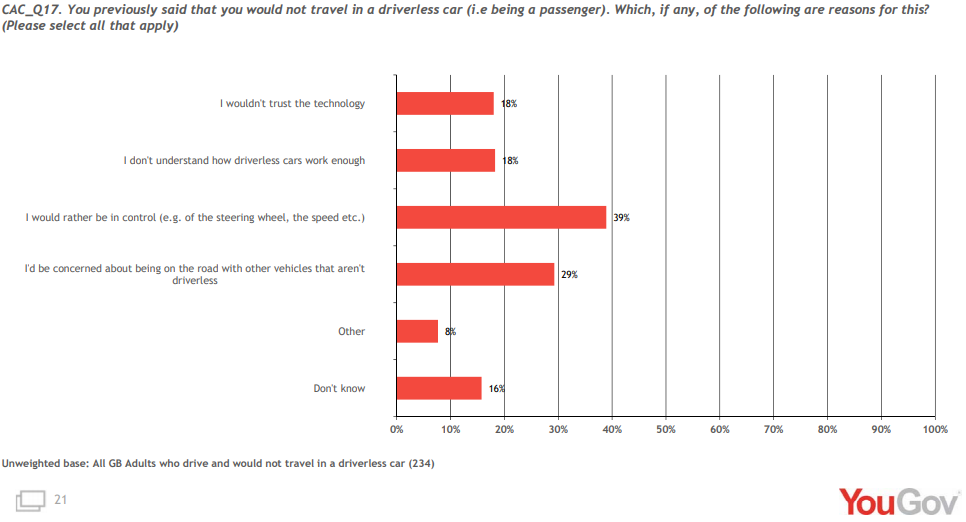 The top three reasons for not wanting to be in a driverless car were: (39%) wanting to rather be in control, (29%) concerned about being on the road with other vehicles that aren’t driverless, (18%) don’t trust the technology/(18%) don’t understand how driverless cars work enough. Unfortunately, for those that hope to gain mass adoption of autonomous vehicles, these issues will be more hard to tackle than the reasons given for electric vehicles. For the most part people are hesitant on electric cars due to some sort technological reason or number (range, charging time, amount of chargers available, or general misconceptions). However for autonomous cars, people are rejecting the sheer concept of driverless cars, they simply do not want to give up control for one reason or another and it’s going to be extremely difficult to persuade them otherwise.

Interestingly enough 16% stated that they did not know why they wouldn’t want to drive in a driverless car. 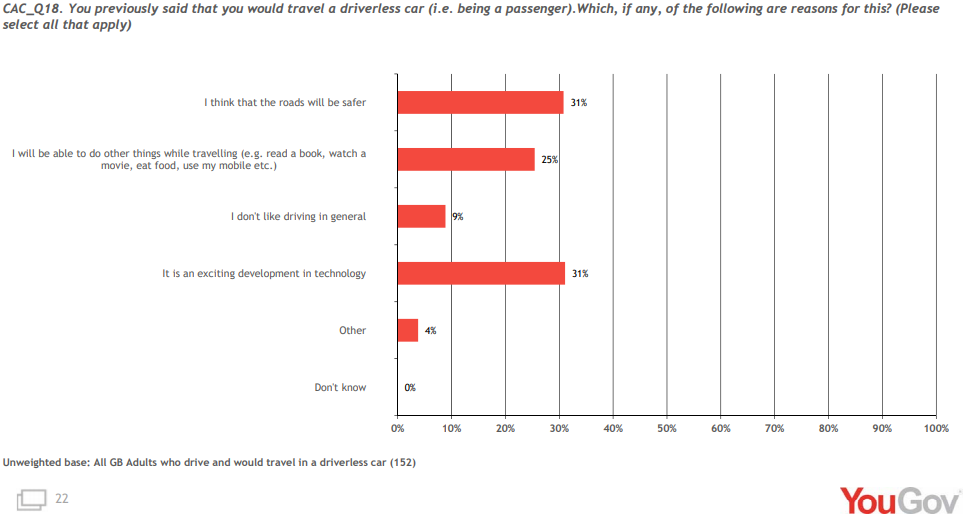 Lastly to those few that stated that they would ride in a driverless car, the top three reasons were: (31%) excited about the technology, (31%) thinking that it will make the roads safer, and (25%) will allow for you to do other things while traveling such as reading or eating.

Needless to say, these results mirror heavily with the recent JD Power study that we reported on. Both show that there is growing confidence/sentiment in electric cars while autonomous cars have a long way to go before people start to trust them.

What do you guys think of the results? How would you boost the sentiment towards electric cars and autonomous cars? Let us know down in the comments below.