This update will only be applicable to folks who have bought the newest iteration of the Model S or Model X that feature the Raven motor along with new adaptive suspension. The update looks to improve ride comfort at high speeds. Both Standard and Sport modes feature an improved algorithm that will adapt better at speeds above 100 mph (160 km/h).

Instead of using the steering wheel, you will now be able to plug in up to two controllers to the front USB ports and play Beach Buggy Racing 2 by yourself or against a friend.

You can now play chess against one of your passengers or play against four different difficulties of AI. Will you become the ultimate Tesla chess master? 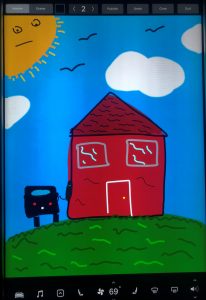 The sketchpad is an early Tesla feature and we are finally starting to see improvements. The company has added saturation and the ability to undo multiple mistakes in their latest Tesla software update.

CHAdeMO charging capability has officially been added to the Tesla Model 3 lineup.

Beach Buggy Racing 2 is part of Tesla’s upcoming batch of games. Beach Buggy Racing 2 will see you racing your Tesla through many different locales and using different power ups to achieve victory. The coolest part of the games is that you can use your actual steering wheel to steer within the car (although be careful, if you play too much you might start to wear your tires as they still move when you play the game).

Tesla has now made it easier for you to reach the easter eggs section with a dedicated Toybox button. Additionally within the easter eggs screen is a new arcade button which takes you to the Tesla Arcade game lineup.

You can now elect to have push notifications sent to you phone every 30 minutes when the Dog Mode is enabled and the battery reaches 20% or below. Definitely a welcome feature to give you peace of mind to make sure your pet stays comfortable.

No, Your Tesla is Not an Appreciating Asset

Tesla recently made this easy. From within your car go to the software menu. Under your VIN you’ll see “Additional vehicle information” just go ahead and click that.

Thanks. I have AP 2.5 but MCU1 so I’m out of luck for lots of these new features. Can’t do the MCU update as I use XM in a bad cell area.

You have not mentioned that this update provides a lot of pretty useless stuff like backgammon but breaks one of the best things about owning a Tesla which is the voice command to play any Spotify song. Now playing music just takes you to a menu so you have to type. This is really dangerous IMO. So don’t update if you haven’t already. Can live with a glitchy car.

Regarding the new Sentry Mode, I am concerned about the Hispanic men who will provide this around-the-clock security. You wrote that the new service “activates cameras and senors to monitor any criminal activity.” (Ha!)