Volkswagen and Ford have announced the expansion of their partnership which was first mentioned last summer. The partnership involves collaboration on a wide range of aspects, such as commercial vehicles, electric vehicles, and autonomous driving. 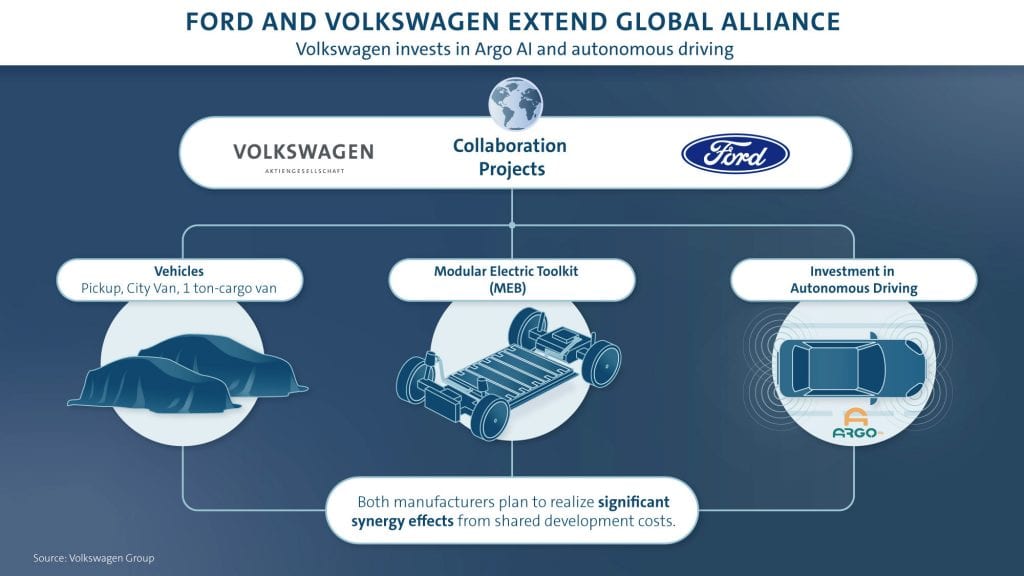 Overall it seems like an equal share of work for both companies. Ford will be responsible for the alliance’s pickup truck and one-ton cargo van. On the other end, Volkswagen will produce a city van and the MEB platform for Ford’s European electric car. Both made an independent investment in Argo AI regarding autonomous driving technology. 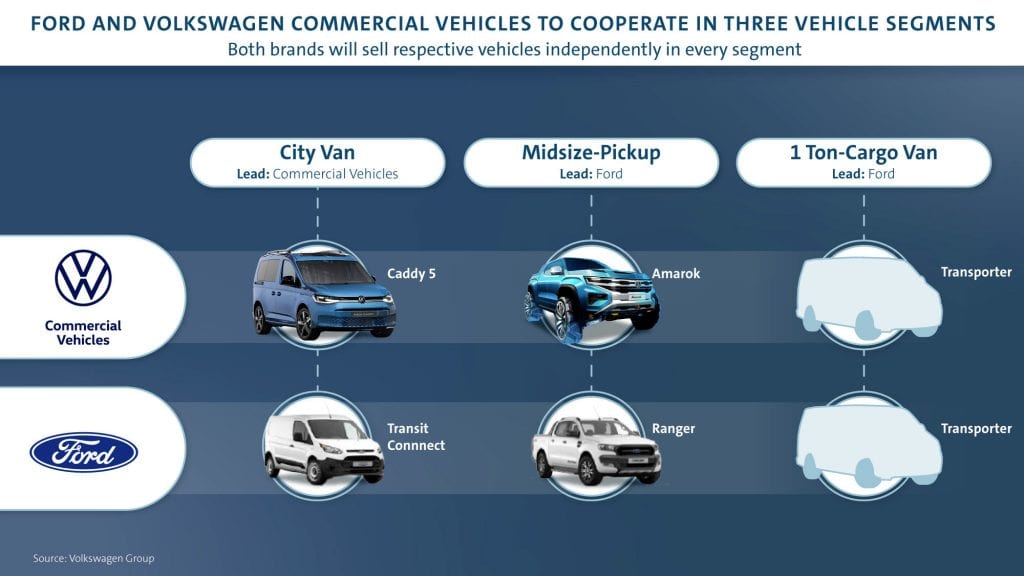 Over several years starting in 2023, Ford could deliver 600,000 electric vehicles atop the MEB architecture, which is designed to combine space and performance with electric drive.  The vehicle, which will be designed and engineered by Ford in Cologne-Merkenich, will add another compelling nameplate to its own all-electric Mustang Mach-E, which will be introduced in 2021.

No further information was given regarding future electric cars in the partnership aside from a statement saying that the two “plan to explore additional ways to cooperate on electric vehicles”. For the time being, Volkswagen has its own slew of ID models coming independent of the alliance and Ford stated that there should be an electric F-150 and Transit within the next 24 months.

I would like to know how many years “several years” is as it determines how impressive the 600,000 electric vehicle figure is.

Lastly, the two will be utilizing their investments in Argo AI to implement autonomous driving in the vehicles produced within the partnership and presumably outside of the partnership as well since they were independent investments. Argo’s self-driving system is the first to have commercial deployment in both Europe and America. Now with their system being introduced in Ford and VW vehicles, some of the most numerous in the world, the autonomous driving company will be fed a lot of geographic data to fine-tune their system. We have seen the testing already begin with the Volkswagen electric van.

Interestingly enough, even though there is pretty deep cooperation here, neither company has taken any ownership of the other, both are still independent of one another and as the press release states, they will “will remain competitors in the marketplace.”

What do you guys think of the partnership? Do you think the changing tides of the automotive world will cause us to see more partnerships between automakers, at least until the transition has been fully complete? Let us know down in the comments below.